DEAR YOUNG PEOPLE, COLLEGE IS LAME. GET A JOB. 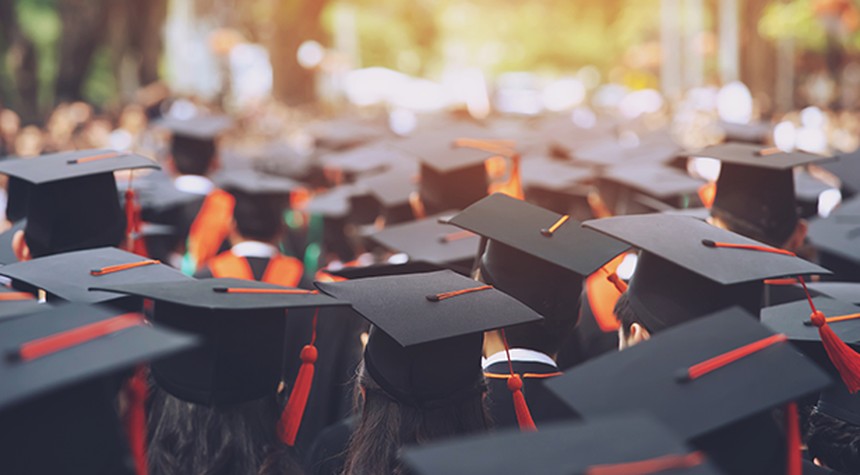 Young people, are you ready for success? Want a career in a rewarding field that will lead to a fulfilling life? Don’t go to college. Be an electrician, be a plumber, be a welder,  be a carpenter — hell, learn to code — but for heaven’s sake and for that matter, your own, don’t go to college.

I know some of you are months or even years away from high school graduation, but: Don’t. Go. To. College. Okay, so if you want to be a doctor, lawyer, or physicist (more on that below), maybe look for a college that does not double as an asylum. Other than that, treat college campuses like the radioactive waste depots that they have become.

IS THIS THE WORLD’S MOST BEAUTIFUL BEACH? 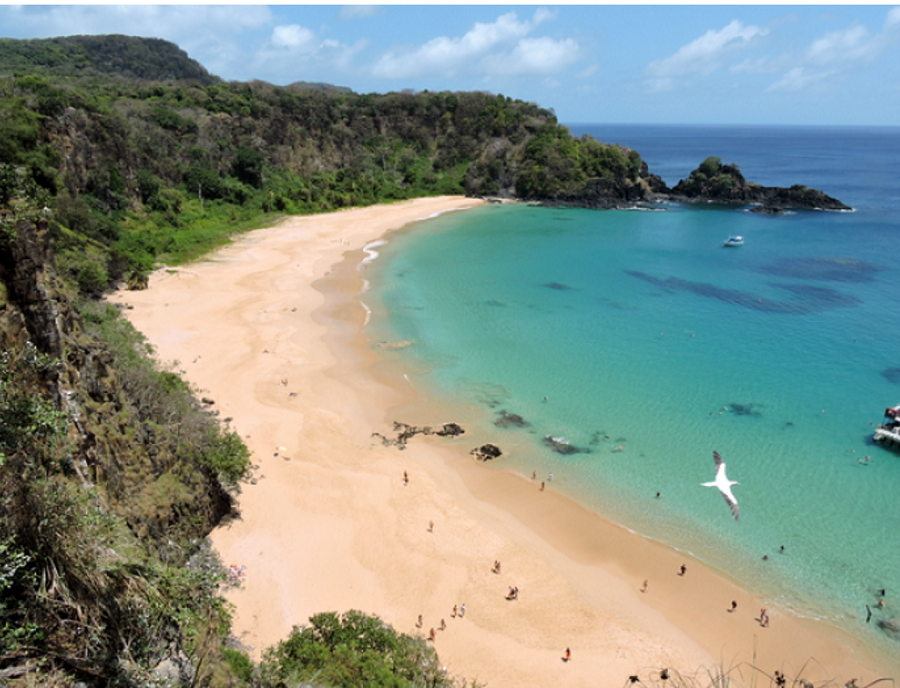 According to the many thousands of world travellers on TripAdvisor, it’s #1: Praia do Sancho on the Brazilian island of Fernando de Noronha. You’ll also find it on just about any list of most beautiful beaches, such as Condé Nast, Harper’s Bazaar, and Luxury Travel.

The whole island is gorgeous. Mention that you’ve been there to any Brazilian who hasn’t and their eyes get misty. Fernando de Noronha (no-rone-ya) is the dream honeymoon, the dream vacation that only comes true for few in Brazil, as it’s hard to get to and hardly any place to stay once you’re there.

You have to get to either Recife or Natal in the far northeast, then fly 220 miles out into the Atlantic. Then take a boat, or scamper down the rocks of a 250ft-high cliff to be on the sugar sand of this enchanting beach – which you’ll have almost to yourself.

For some reason, all those lists have the name wrong, calling it “Baia” or “Baio,” when it’s “Praia” (beach in Portuguese). As the welcome sign proudly announces above the cliff trail: “Praia do Sancho – A Mais Bonita do Mundo,” Sancho Beach – The Most Beautiful in the World. If you’re lucky to ever get here, you’ll surely agree. (Glimpses of Our Breathtaking World #73 photo ©Jack Wheeler)

THE DANCING FOREST ON THE CURONIAN SPIT 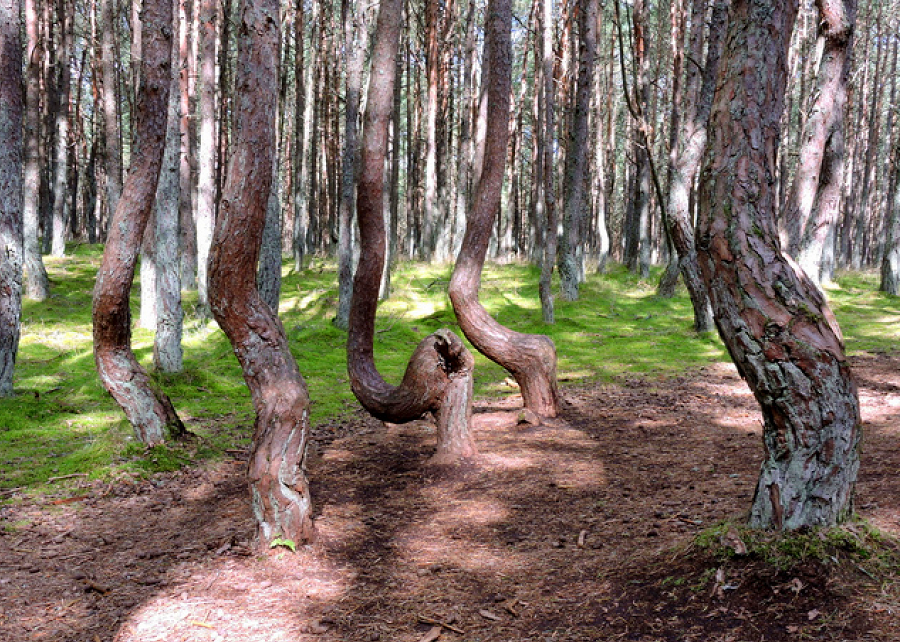 The Curonian Spit is a 60 mile-long and skinny stretch of sand separating the 625 square-mile Curonian Lagoon from the Baltic Sea. It is jointly shared by Lithuania and Kaliningrad. The trees of one section of the pine forests covering the spit are weirdly twisted and distorted by some unknown force of nature. Their bizarre undulations have earned it the sobriquet, “The Dancing Forest.” It’s one of the as-yet unexplained mysteries of life on our planet, and a wondrous one to see. (Glimpses of Our Breathtaking World #200 photo ©Jack Wheeler) 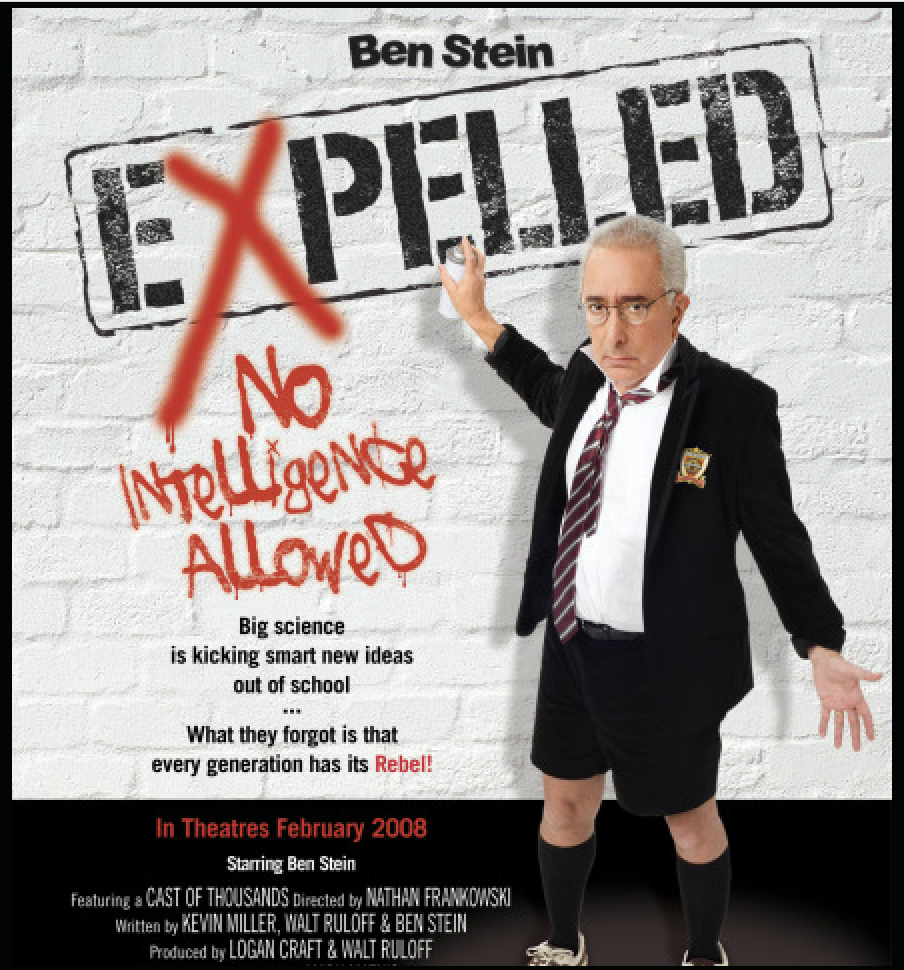 "It is dangerous to be right in matters on which the established authorities are wrong."

―Voltaire, The Age of Louis XIV

In 2008, Ben Stein released a documentary film, Expelled: No Intelligence Allowed, that addressed the absolute intolerance within academia and the media for even a mention of "intelligent design" as opposed to unguided evolution with regard to the origin of life.  The editor of a scientific journal connected to the Smithsonian lost his job for publishing an article by Steven C. Meyer that referenced intelligent design.  Journalists who addressed the issue have been fired, and professors have lost their jobs if they admitted to considering it a viable theory.  As one might expect, the Wikipedia page on the film mocks it as propaganda.  Say the words "intelligent design," and the Darwinian cult hears "creationist."

If this sounds familiar, consider the parallel with the lab leak theory of the origin of COVID.  The entire country, and most especially virologists, epidemiologists, and doctors, has endured what proponents of the intelligent design theory within academia have experienced for decades.  From the outset of the release of COVID upon the world, any voices that opposed the Faustian Faucian narrative were vilified, censored, their careers threatened, just as those scientists or journalists who uttered the words "intelligent design."

Schools must close, masks must be worn, people must "social distance" from one another, vaccines must be mandated.  None of those things, it turns out, was necessary.  Nor was any of them based on any science, not even the vaccines.  They all parallel a plan laid out in Event 201, a World Economic Forum exercise that took place in October 2019.

THE US COUP WE NEVER KNEW 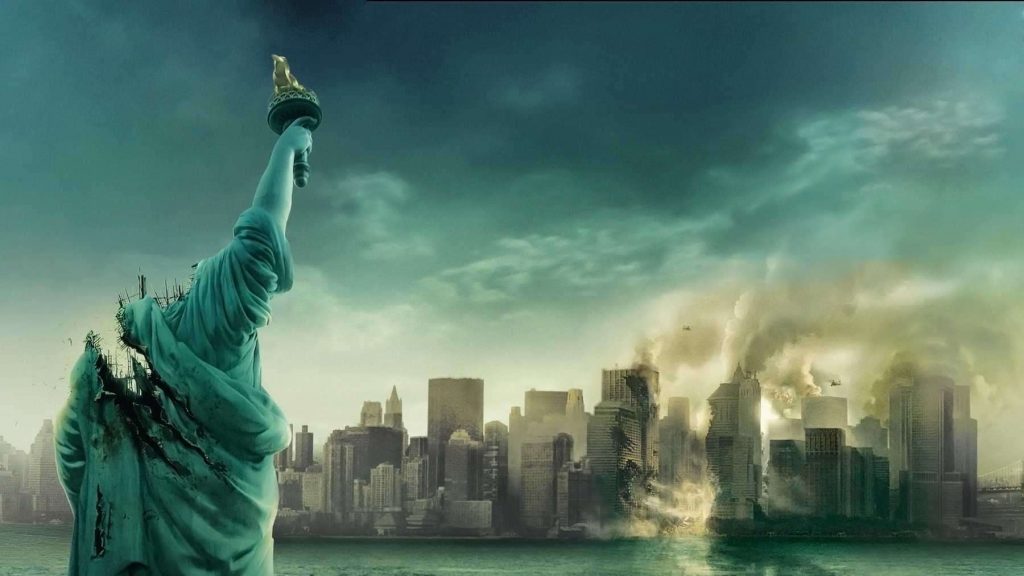 Did someone or something seize control of the United States?

What happened to the U.S. border? Where did it go? Who erased it? Why and how did 5 million people enter our country illegally? Did Congress secretly repeal our immigration laws? Did Joe Biden issue an executive order allowing foreign nationals to walk across the border and reside in the United States as they pleased?

Since when did money not have to be paid back? Who insisted that the more dollars the federal government printed, the more prosperity would follow? When did America embrace zero interest? Why do we believe $30 trillion in debt is no big deal?

What happened to Election Night returns? Did the fact that Americans created more electronic ballots and computerized tallies make it take so much longer to tabulate the votes?

Here are more questions to ask ourselves...

KEEPING YOUR SANITY BY AVOIDING THE ALLURE OF VICTIMHOOD 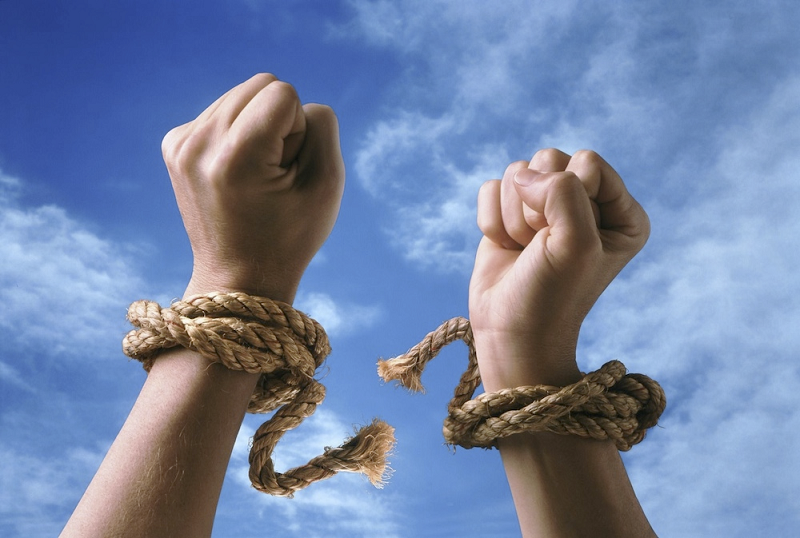 One of the most harmful ways of thinking of ourselves is as a victim. It can make it nearly impossible to find success, financially or otherwise, and undermines our capacity for relationships.

Yet this mindset is not uncommon, we’ve probably all experienced it to some degree. But for some it can create a more pervasive atmosphere in their lives.

As researchers Rahav Gabay and his colleagues have shown, this mindset has four specific qualities, that lead to three specific biases and one onerous tendency, that can skew our view of the world.

Today we’ll look at how to move away from this kind of mindset, and re-orient toward taking effective, positive action. We start with understanding that changing a victim mindset is much more complicated than the kind of “get over it” advice that’s so common – and useless.

A CUP OF YAK BUTTER TEA IN A TIBETAN NOMAD TENT 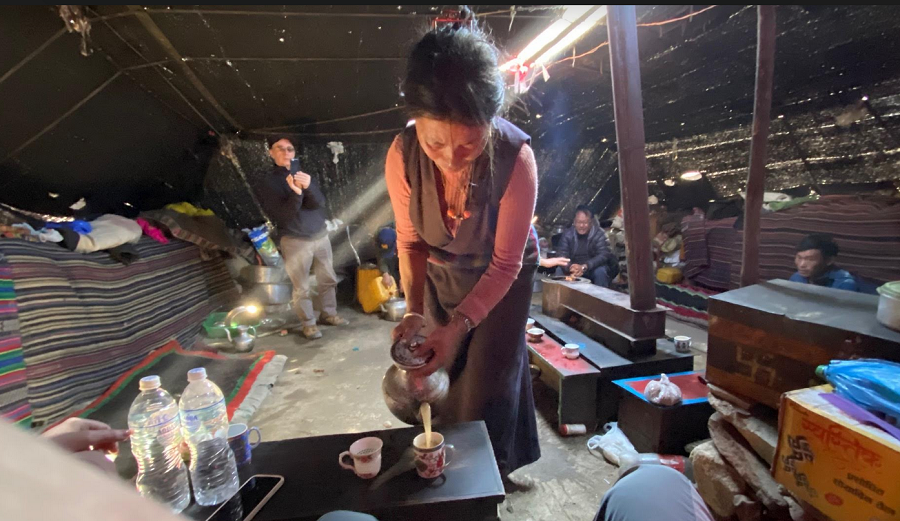 At 14,000 feet, Tibetan nomads called Drogpa set their summer encampment for their yak herds to graze on green pastures. You find them with difficulty in the remote Himalayan highlands of the Kingdom of Lo. They are happy to welcome you into their home, a single large tent of black yak wool, and serve you a cup of delicious yak butter tea.

It is a rare privilege to be with these people and experience their ancient way of life. It is something we strive to do on our Himalaya Helicopter Expeditions. I took this picture in May. Here is their home from the outside. (Glimpses of Our Breathtaking World #203 photo ©Jack Wheeler) 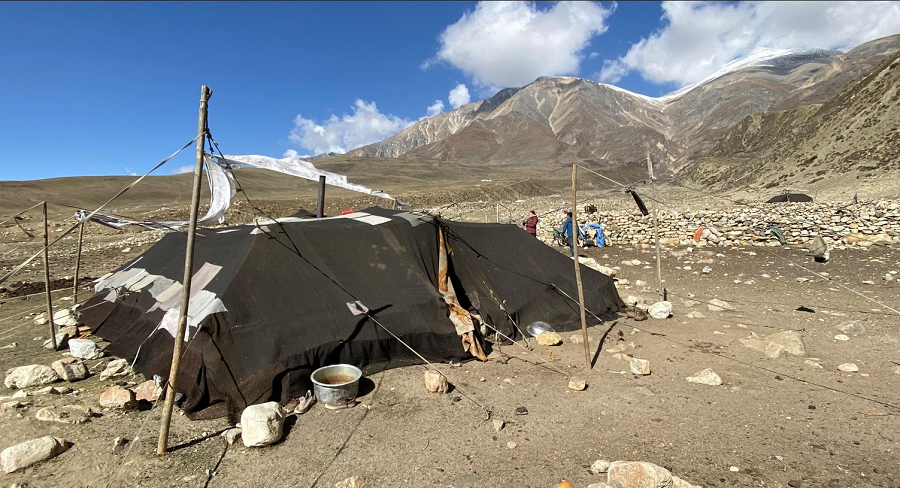 Buenos Aires, Argentina.  I am sending this first HFR of 2023 to you from the capital of Argentina at the start of our Patagonia Wonderland exploration with your fellow TTPers.

It’s an unbeatable way to start a new year:  with an unforgettable adventure in an extraordinary part of the world far away from home.  Particularly now – for it’s a great way to say goodbye and good riddance to the rubbish year of 2022.  Into the trash can of history it goes.

That’s a very full trash can. In November, America – Dem cheating making the difference on the margin notwithstanding – voted for more crime, more CRT, more forced child tranny change, more inflation, more woke lunacy, more corruption, the list of nightmares goes on.  It's a patient dying of a terminal disease who doesn't want to be cured, who wants to die instead.

So what’s in store for us and the world in 2023? We’re going to start with who will be the biggest Winners and Losers of 2023, then identify the fundamental key to whether a country will flourish and prosper, or decline and suicide itself. That most certainly applies to the USA. And yes, all this involves the three books above.

FLASHBACK FRIDAY – THE MAN-EATER OF DALAT 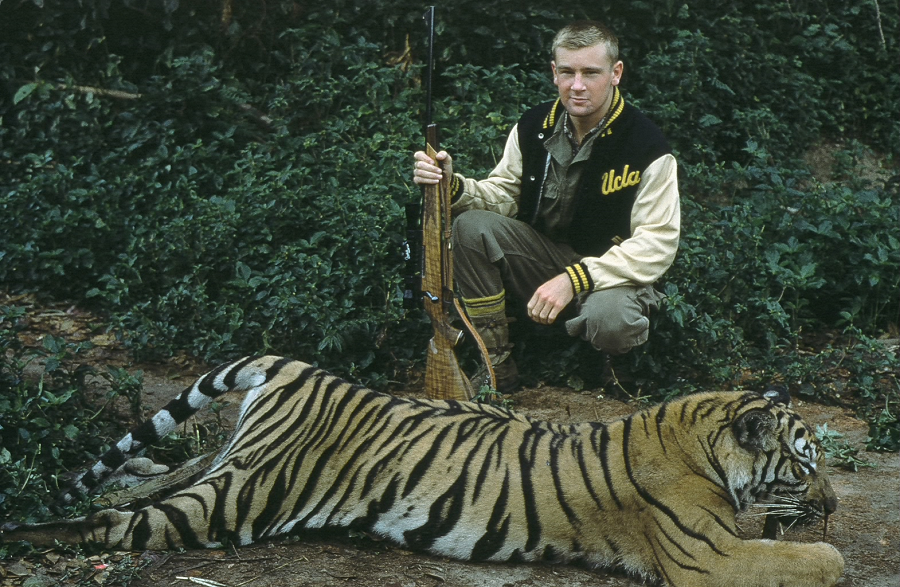 Dalat, South Viet Nam, 1961. I was 17 years old. A friend of my father’s, Herb Klein, came by our house. He was a prominent businessman whose passion was big-game hunting. He had just returned from the mountain jungle highlands of South Viet Nam and regaled us with stories of the Montagnard tribespeople who were plagued by tigers with a taste for human flesh. He told me that after climbing the Matterhorn, living with Amazon headhunters, and swimming the Hellespont, hunting a man-eating tiger should be my next adventure.

“You’d be saving so many lives, Jack,” he told me. “There’s one I heard about from the Co Ho Montagnards that’s killed and eaten almost 20 of them in the forests outside the town of Dalat. I know who can guide you, he was mine, his name is Ngo Van Chi.”

Somehow, I talked my parents into letting me do this. I had saved up the money from giving tennis and judo lessons. So there I was, in pitch dark in a “mirador” of branches and leaves, holding a .300 Weatherby with a flashlight wired to the barrel, waiting for this man-eating tiger to come for the rotting water buffalo we set out as bait. Chi and I heard the tiger, I put the rifle barrel out, Chi clicked on the flashlight, I saw these two enormous red eyes, and fired.

And there he is, the Man-Eater of Dalat, who would never kill another human being ever again. (Glimpses of Our Breathtaking World #175 photo ©Jack Wheeler)