2 The Point News » Rahn on Econ101 » Members Only » WHY IS PUTIN THREATENING UKRAINE?

WHY IS PUTIN THREATENING UKRAINE? 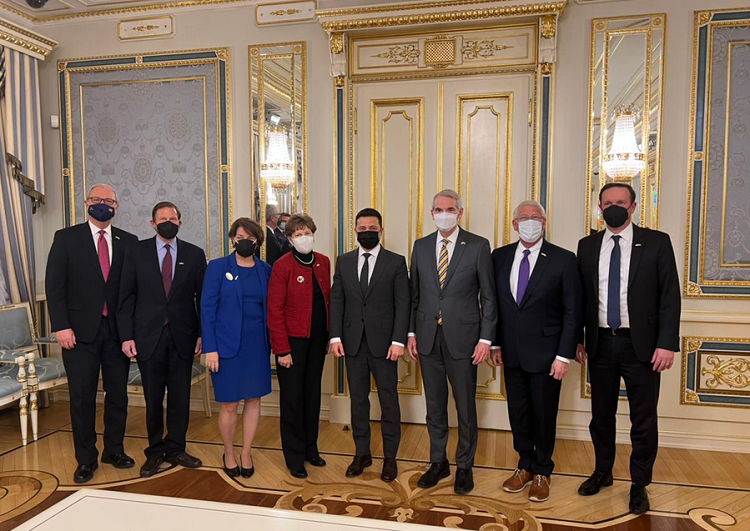 US Senators Meet In Ukraine Against ‘Putin’s Belligerence’

Ukraine is much smaller than Russia in geography, population, per capita economic wealth and military power. Ukrainian leaders have not voiced hostile intent toward Russia. Some Ukrainians have advocated Ukraine joining NATO, a mutual defense organization, not an aggressive military alliance.

If Russian President Vladimir Putin were to invade more of Ukraine’s territory (in 2014, Russia annexed Crimea and occupied part of eastern Ukraine with the ongoing war), much of the world would condemn the action, and he could expect immediate and hard-hitting economic sanctions.

An invasion of Ukraine would cause Russia much pain and little gain — so why even threaten military action?

Thirty years ago — to be precise on Christmas Day 1991 — then-Soviet leader Mikhail Gorbachev gave a speech announcing that after 69 years the USSR would no longer exist since many of its former republics had announced independence, including Ukraine, and thus finalizing the emergence of 15 separate countries.

Many in Russia (including Mr. Putin) viewed the events as the greatest geopolitical disaster of the 20th century.

Kyiv, Ukraine’s capital, was the original capital of the multiethnic people (Kyivan Rus), which predated Muscovy/Russia by several hundred years. In 1223, the first of the Mongol invasions began. Over the next several centuries, the Russian and Ukrainian lands were broken into several vassal states ruled by the Mongols known as the Golden Horde.

In the intervening centuries, Ukraine was independent, part of the Russian Empire, or part of other European powers. The Ukrainians have always had a separate identity, language and culture, different from the Russian.

Ukraine was a major nuclear power when it achieved its independence from the Soviet Union. In December 1994, the Budapest Memorandum committed the United States, Russia and Britain to respect the independence and sovereign borders of Ukraine in exchange for Ukrainians giving up their nuclear weapons.

The Russians have clearly violated the agreement — which did not contain an enforcement mechanism.

Mr. Putin has said, regardless of the legal niceties, that he views Ukraine as part of Russia. His attitude is a throwback to the age of imperialistic empires, where countries believed that they had to control the landmass and governments of others to maximize wealth and influence.

By necessity, the U.K. and France were forced to devolve their empires; and rather than getting poorer, they ultimately became richer, without the cost of maintaining troops and civil servants in dozens of countries. The goal of mutual prosperity could be better obtained through free trade and investment agreements.

Few officials of the former Soviet Union defend communism. The rational thinkers, including Mr. Putin, understand it was a failure as an economic and political model. But Mr. Putin (and President Xi Jinping in China) have argued that they can get better results by using authoritarian capitalism (or something very close to fascism) to avoid the swings in the free market system and the uncertainties of decisions made by millions of independent individuals.

Mr. Putin has played a weak hand extraordinarily well over the decades. Russia ranks about 81 of the world’s countries in per capita income — $11,600 — while Switzerland and Ireland each have over $94,000.

Russia has nukes and few very modern weapons — but both in quantity and quality, Russia greatly lags the U.S. Even so, Mr. Putin strides around the world stage, like the ruler of a superpower Soviet Union once was.

He understands that the U.S. and other western leaders are weak and that this is a once-in-a-lifetime opportunity to bully them into making concessions to Russia. He extorts by threatening war — knowing he could sustain one for only a very short time.

For hundreds of years, the Russians have had a sense of grievance against the West. Many believe that Western governments (and by extension the U.S.) and businesses took advantage of Russians when they were weak — so payback is considered fair play.

This grievance makes it difficult for outsiders to do business in Russia. Taking advantage of a Westerner is often considered an act of loyalty. Using their intelligence services for commercial purposes is viewed as just part of the game.

If the players of a global chess game are using different rules, the outcomes are unlikely to be accepted. Russia is not a “normal” country, and Mr. Putin is not a normal leader.

The great danger is that one side or the other will miscalculate. President Biden may be weak, but at some point, he might well overreact just to prove he isn’t weak  — and take an action that Mr. Putin or Mr. Xi will respond to with force.

This is how major wars start. The First World War is exhibit one. It was a “war about nothing” and only supposed to last a couple of months at worst. Instead, it cost millions of lives and lasted for almost five years.

After all, King George of Britain, the German Kaiser and the Russian Czar were cousins — all grandsons of Queen Victoria — and, certainly, they would not allow the disagreements to get out of hand!

How will the U.S. react to a Russian invasion of Ukraine or a Chinese invasion of Taiwan? Leaving such questions unanswered before the act may well be a formula for disaster.

Richard W. Rahn is chair of the Institute for Global Economic Growth and MCon LLC.