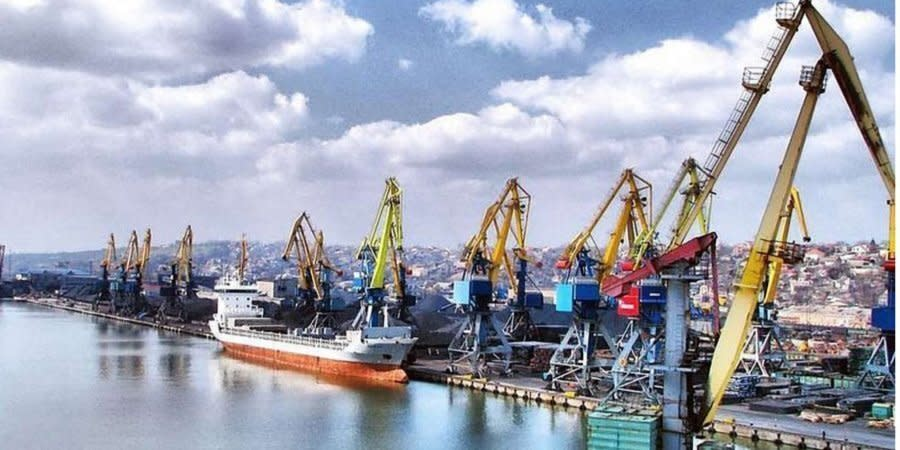 “Sanctions on Russia have no connection to the unfolding global food crisis. The sole reason for shortages, rising prices, and threat of hunger is the Russian military physically blocking 22 million tons of Ukrainian food exports in our seaports. Demand Moscow to end its blockade.”  –Dmytro Kuleba, Ukraine Minister of Foreign Affairs, May 28, 2022

“We are on the precipice. 10% of the global population may be facing mass starvation. You’re looking at a humanitarian crisis of unprecedented proportions, probably the worst since the Black Death of the 14th century.” – James Rickards, international economist and investment banker, May 26, 2022

From the beginning of the 2022 Russo-Ukrainian war, the Russian Black Sea Fleet moved in to block or occupy all of Ukraine’s ports on the Black Sea and the Sea of Azov. In the first days of the massive re-invasion, Russian warships attacked several international civilian vessels entering or exiting Ukrainian seaports.

On February 24, the opening day of the Kremlin’s so-called “special military operation” against Ukraine, a vessel belonging to the Turkish company YA-SA Shipping was bombed by Russian aircraft on its way from Odesa, 50 miles from the coast.

The following day, Namura Queen, a Japanese ship operating under the Panamanian flag, was attacked by a Russian anti-ship missile on its approach to the port of Pivdenniy, where it was going to be loaded up with Ukrainian grain for export.

Around the same time and nearby, the Moldovan-flagged Millennial Spirit was also hit and damaged, and several sailors onboard suffered injuries (Izbirkom.org.ua, February 25).

To keep the northwestern portion of the Black Sea and regional Ukrainian ports under its control, Russia continuously maintains several warships on patrol between Serpent Island and Sevastopol. Around 20 Russian surface vessels and up to 4 submarines presently operating in the Black Sea basin are armed with stand-off missiles capable of ensuring effective sea denial capability.

Russia’s blockade of Ukrainian ports is contributing to a growing human calamity that extends far beyond the immediate region. Around 70 merchant vessels loaded with grain and other critical cargo have been unable to leave Ukrainian ports for the past three months due to the high danger of armed attack from Russian forces (Fakty.com.ua, May 9).

On May 19, the CEO of the agricultural analytical company Gro Intelligence, Sarah Menker, testified before the United Nations Security Council that the world has only ten weeks of stored wheat reserves left in warehouses. The primary reason for this crisis is the Russian war of aggression against Ukraine (UNIAN, May 25).

Achim Steiner, the administrator of the United Nations Development Program, told an audience at the World Economic Forum in Davos that the inter-related crises in food, fuel and finance, caused or exacerbated by the war in Ukraine, threaten to provoke unrest in poor countries and could lead to financial default in more than 70 states (UNIAN, May 25).

Earlier this month, UN Secretary General António Guterres announced talks to unblock grain exports from Ukraine and called on Russia to allow the grain to be exported from Ukrainian ports (Unn.com.ua, May 19). At the same time, Senegalese President Macky Sall, who holds the chairmanship of the African Union, intends to hold talks in Moscow and Kyiv in the coming weeks.

After meeting in Dakar with German Chancellor Olaf Scholz, Sall stressed that the African Union is seeking a ceasefire in Ukraine and hopes to help in the fight against high energy and food prices (Zerkalo Nedeli, May 22).

Whether or not these political and diplomatic efforts can make any progress, they will have a limited effect unless Ukraine is able to fully defend its sovereignty and territorial integrity at sea. To do so, the country critically needs to develop a sea denial capability to mitigate Russian regional naval dominance and continued aggression against Ukrainian maritime interests.

First of all, Ukraine needs to acquire somewhere around 100 anti-ship missiles to deter the Russian surface fleet involved in the sea blockade.  Last Saturday (5/28), a large shipment of Harpoon coastal anti-ship missiles from Denmark and the US arrived in Odesa (EU Today 5/29).  Serhiy Bratchuk, director of the Odesa Military Region believes this shipment is enough “to sink the entire Russian Black Sea Fleet.” 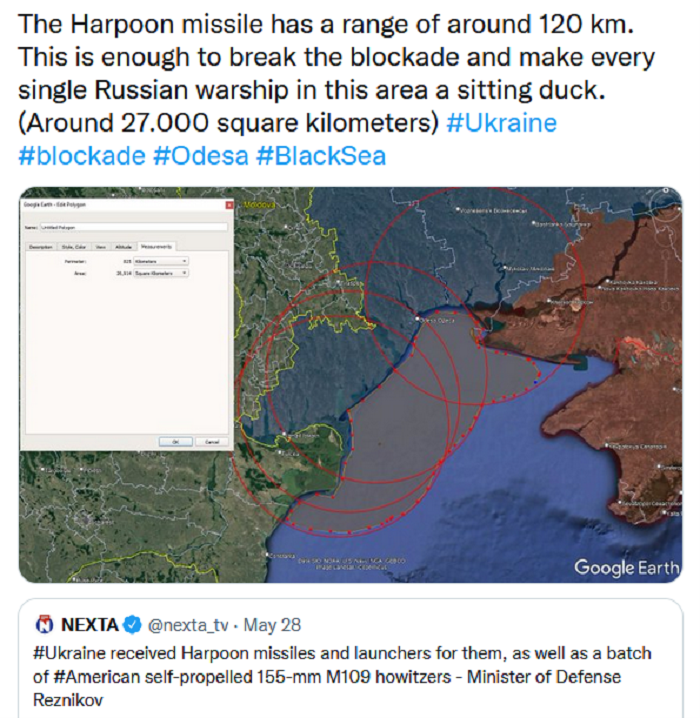 Another indispensable capability for Ukraine is to neutralize Russian coastal missile systems based in Crimea. And the most appropriate Western weapons complexes for this task are the interoperable High Mobility Artillery Rocket System (HIMARS) and ML270 Multiple Launch Rocket System (MLRS).

When armed with the MGM-140 Army Tactical Missile System (ATACMS), a HIMARS or ML270 launcher would be able to destroy the enemy’s shore-based targets within a range of 300 kilometers. Ukrainian civilian and military officials are vigorously requesting these systems from the United States and other Western partners (BBC News—Ukrainian service, May 21).

When located along the shore, these mobile surface-to-surface missile complexes would significantly boost Ukraine’s ability to deter Russian naval forces, unblock Ukrainian seaports and, at least partially, ensure the security of sovereign Ukrainian waters in the Black Sea. This would be a minimum prerequisite for vessels loaded up with grain exports to navigate out from Ukrainian ports or for supply ships to come in.

Yesterday (5/31), the US confirmed that a number of HIMARS systems will soon be shipped to Ukraine – however, with their range restricted to only 80 kilometers or a bit less than 50 miles, placing Crimea missile emplacements out of range – see map above (Ukranews June 1).

The purpose of the range-restriction is to disenable attacking targets in Russia proper.  Yet Crimea is not in Russia – it is militarily occupied by Russia just as most of the Donbas, and thus should be legitimately targetable.

An optimal solution, from a security perspective, would be the establishment of a maritime “humanitarian corridor” through the territorial waters of the western Black Sea countries, all the way to the Turkish Straits. This would require collaboration between Ukraine, Romania, Bulgaria and Turkey to establish protective naval convoys for the grain ships.

Two decades of intensive cooperation among their navies over the last couple decades could presumably facilitate and quicken this process (Obozrevatel.com, May 24). Locating this humanitarian corridor inside the territorial waters of the above four states would help mitigate the threat from Russian submarines, which have a limited ability to operate in shallow waters; moreover, the littoral states would be able to engage more air and ground-based military assets against them.

On the other hand, a maritime route that traverses the deep central part of the Black Sea would necessitate significantly greater support from the Turkish Navy.

A much-discussed idea at present is participation by the North Atlantic Treaty Organization (NATO) in “de-blockading” Ukrainian ports, but the likelihood that non-littoral Alliance ships would become involved is extremely low. NATO as a collective organization continues to be extremely cautious about militarily intervening in Russia’s war against Ukraine (Liga.net, May 25).

Perhaps, impetus for creating a naval coalition to escort Ukrainian grain convoys could be strengthened by giving it the status of a UN humanitarian mission, which might even encourage NATO forces to join this operation. But Russia, as a veto-wielding permanent UN Security Council member, would likely block such an initiative.

Ukraine’s own ability to secure and control its sovereign waters and ports is, thus, the initial priority and the key to breaking Russia’s naval blockade. Ukraine needs a convincing sea denial capability, which will require assistance from its strategic international partners to develop.

But time is running critically low.  Hundreds of millions of our fellow human beings face starvation unless Russia’s blockade is not forcibly ended.

Captain (ret.) Andrii Ryzhenko is a former officer in the Ukrainian Navy, serving over 35 years at sea and as defense and strategic planner.