THE PSYCHOPATH AS PHILANTHROPIST 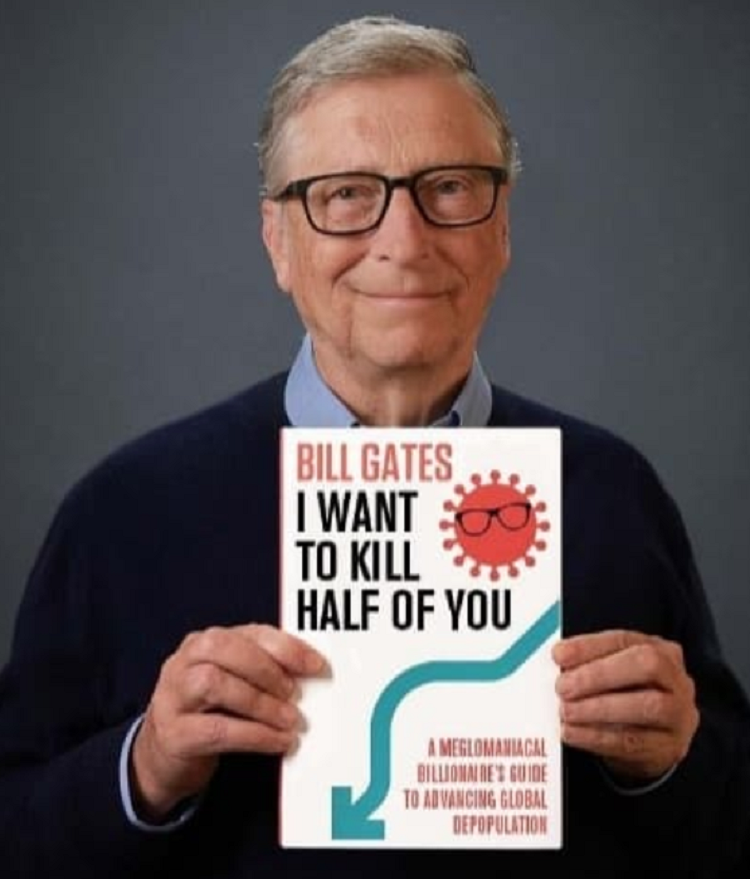 The real title of Gates’ How To Prevent the Next Pandemic

There’s a joke being told in my house this week: Jeffrey Epstein’s best friend, a little-known and slightly autistic high school dropout named Bill Gates has a new book out this month. Perhaps you’ve heard of him?

Unfortunately, of course, we have all heard of him.

From Borneo to Boston, the entire world is only too familiar with the man who wants to inject you into the future. Bill Gates is the front man — the public face — of Big Pharma’s global COVID tyranny.

Lockdowns? He loves them! Booster shots forever? He thinks it’s a smart idea! Germ warfare simulations? Sign him up! There’s no dystopian technological overreach that Gates won’t enthusiastically endorse. He would have already harvested your DNA and stuck it in a Shenzhen genome sequencing machine — if not for the pesky issue of, you know, human rights.

Who else would be dumb enough to evangelize that all of the world’s problems could be solved with the tip of a syringe?

That’s an idiotic message because it’s so obviously untrue. Gates doesn’t have any interest in people shaping their own future — he wants to shape your future, and he would really appreciate it if you’d get out of the way.

His unlimited faith in science and technology — which is the crudest form of religion for materialists — has merged seamlessly with his unlimited faith in himself so that it’s hard to tell where the monomaniacal narcissism and the philanthropic pretenses begin and end in the Universe of Bill.

Of course the problem with the Universe of Bill Gates is that it contains a massive black hole at the center — which is his personality. He has always had a very big problem as a vaccine evangelist: he has never understood how much he strikes other people as abnormally creepy.

This is not simply my personal opinion. It’s the common opinion of people who have never met Gates personally — but have read his books or watched his speeches.

“Imagine yourself sidled up to a bar. A talkative guy sits down on the stool next to you. He has decided that there is one thing wrong with the world. It can be literally anything. Regardless, he has the solution.

It’s interesting and weird for a few minutes. But you gradually come to realize that he is actually crazy. His main point is wrong and so his solutions are wrong too. But the drinks are good, and he is buying. So you put up with it. In any case, you will forget the whole thing in the morning.

In the morning, however, you realize that he is one of the world’s richest men and he is pulling the strings of many of the world’s most powerful people.

Now you are alarmed.

In a nutshell, that’s what it’s like to read Bill Gates’s new book…”

Jeffrey Tucker didn’t come away from reading the book thinking that Gates was well-meaning but misinformed — or basically good but flawed —he came away thinking Gates was crazy. This turns out to be a recurring theme among people who deal with the co-founder of Microsoft.

A journalist named James Corbett also reviewed the same book recently and found it “every bit as infuriating, nauseating, ridiculous, laughable and risible” as you would imagine.  “There is certainly nothing of scientific or medical value in here,” according to Corbett. “There’s nothing even interesting here. It’s a baffling book even from a propagandistic perspective.”

He sums up the book by saying: “Just when you thought you’d gotten rid of him, like a canker sore in the mouth of humanity, Bill Gates pops up yet again.”

So that’s two bad book reviews. The funny thing is that most of the world’s population now shares the same feelings about Bill Gates that these two book reviewers have — and none of us have even read the book.

That’s because Bill Gates is a new kind of villain: he’s a psychopath pretending to be a philanthropist.

If you thought that Bill Gates might do the sensible thing, and keep a low profile after his wife pursued a nasty and public divorce over his ties to an international pedophile sex trafficking ring — you would be wrong. Being sensible is for ordinary psychopaths who are concerned about exposure, and can sense reputational danger.

But if you’re a psychopath who is also the world’s third wealthiest human being, you probably don’t understand what exposure means because you’re not really in touch with human morality in any fundamental sense.

After all, you capture — or, if you prefer, “influence” or “invest” or “collaborate” or whatever the global elite likes to call legalized bribery this week — entire foreign governments and international non-government organizations from Monday to Friday every week. Basically, you think you’re God — and nobody you’ve bought (and that’s practically everybody) wants to dissuade you from that feeling.

So you don’t even bother taking a break from your busy schedule of pretending to be the world’s leading TV expert on pandemics — because you’re too busy blocking out the sun, and buying up America’s farmland, and signing deals with Chinese DNA harvesting firms, and teaching Seattle schoolkids that math is racist.

And when you need a little R&R in your spare time, you don’t just hang out with the kind of friends that ordinary psychopaths collect — no way! — you spend your time with the world’s most infamous pedophile. I mean: you’re a trailblazer, and you only want to associate with other innovators — am I right?

And when the little people start to wonder why you were hanging out ( 37 times!) with the world’s most infamous pedophile five years after that pedophile was forced to register as a sex offender you actually come up with the dumbest excuse in the history of mankind: you claim that you were simply trying to win the Nobel Peace Prize!

That’s what makes Bill Gates special among billionaire psychopaths: his excuses are so childish and stupid that you would have to be autistic yourself to believe them.

He will tell you that he’s simply the victim of wild conspiracy theories — and he will say that right after he tells you that he cannot recall why he flew on Jeffrey Epstein’s plane when he owns a bigger plane himself. And that lame excuse might come right after he explains that he has no idea why he was secretly donating millions of dollars to MIT using Epstein as a cut-out.

And, furthermore, he really has absolutely not the faintest clue why Jeffrey Epstein would name the Gates Foundation’s science advisor as the trustee to his will right before his death!

Normal people might have questions about these obvious evasions of reality. Questions like: why did his divorce from Melinda Gates coincide with the incarceration of Ghislaine Maxwell? Why does a high school dropout tech geek with no medical experience get to pretend that’s he’s in charge of global health policy?

When Bill Gates has a moment to explain it, Prince Andrew would like a word.

Recall his book last year was How To Avoid A Climate Disaster.  How? Bill Gates will just block out the sun! If there’s too much carbon in the atmosphere, Bill Gates has got a solution.

Just understand: you are the carbon that the climate change zealots want to reduce.

You know what I’m talking about. A COVID virus pandemic breaks out globally, and Bill Gates is perfectly positioned to “rescue us” with experimental and ineffective vaccines.

We find out that he’s the largest private owner of farmland in the United States and a global food shortage begins.

We find out that there’s a baby formula shortage in the United States— and Gates is suddenly an investor in synthetic baby formula made in a lab.

Are you starting to sense a pattern yet?

What are the odds that Bill Gates is involved in the monkeypox virus? What are the chances that he’s collaborating or investing or partnering or subsidizing some researcher right now who will discover a vaccine about ten minutes after the monkeypox arrives on the front page of every newspaper in the world?

That’s what happens in the Universe of Bill from time to time: the solution gets released before the problem does. Rest assured: those bugs are being fixed in the next germ warfare simulation. The global elites will run the monkeypox virus much better than the COVID virus.

Don’t worry: your new vaccine booster is on the way.

The future is a scary place but the world’s leading philanthropist will lead the way.

There’s no need to worry: Bill Gates has thought of everything.

Emerald Robinson is an independent journalist. Her new weekday TV show, The Absolute Truth, is on FrankSpeech. She served as the chief White House correspondent for Newsmax (2020-2022) and for One America News (2017-2020).