2 The Point News » Guest Authors » Members Only » IS JUSTICE SONIA SOTOMAYOR ABOUT TO BE PUSHED OFF THE SUPREME COURT?

IS JUSTICE SONIA SOTOMAYOR ABOUT TO BE PUSHED OFF THE SUPREME COURT? 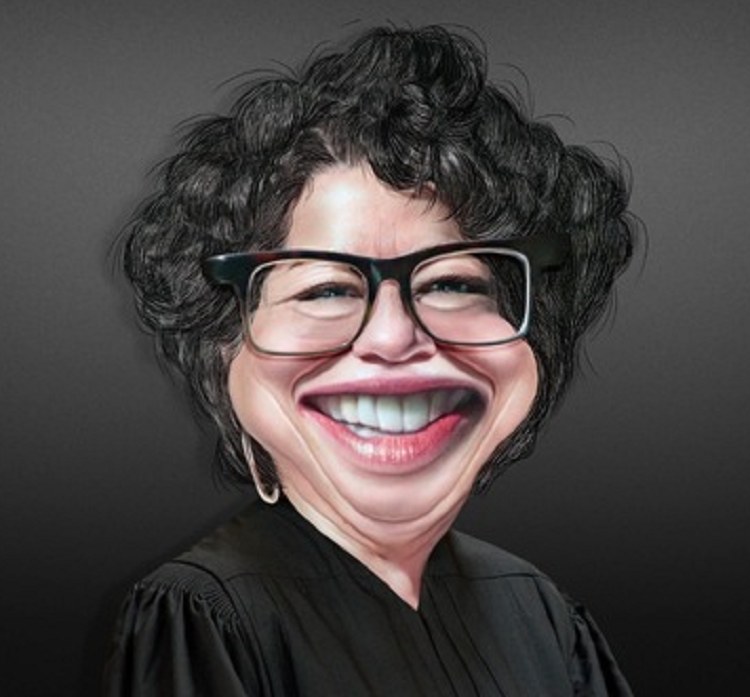 Supreme Court Justice Sonia Sotomayor is recognized for three things: (1) She was the first Hispanic female justice on the Court; (2) She’s a leftist’s leftist; and (3) she is not wise but is almost staggeringly ignorant and biased.

All those factors benefit Democrats, but now they’re getting worried, not because of her manifest legal and intellectual deficits but because there’s a possibility that they will not hold the White House and Senate after the 2024 election.

Barack Obama nominated Sotomayor to the Supreme Court in 2009, following her eleven-year stint as a Clinton appointee on the Second Circuit. Of Puerto Rican heritage, she has the Ivy League credentials that mean so much to Democrats.

No wonder even her Wikipedia profile concedes that “she was not considered among the star students in her class.” Her academic focus was her own race which might have intimidated the law school’s White, bleeding-heart liberal faculty.

When one reads about Sotomayor’s early career after graduating from Yale, two things stand out: She was a hard worker and a mediocre thinker and lawyer. I’m a huge believer in being a hard worker, which will trump genius nine times out of ten.

Throughout her tenure on the Supreme Court, Sotomayor has made statements from the bench that leave one questioning her mental wattage.

Last year, when the Supreme Court was hearing about Biden’s attempt to use OSHA to enforce vaccine mandates, she was such a font of misinformation that even leftist media outlets were forced to correct what she said:

NEW: Justice Sonia Sotomayor said during oral arguments today that “we have over 100,000 children, which we’ve never had before, in serious condition, and many on ventilators” due to the coronavirus. That’s False. https://t.co/9itoVd1s1L pic.twitter.com/zX8Nf6Bx8r

In contrast, CNN’s Jake Tapper called out the liberal justice. “That’s just not true,” he said of her claims about child hospitalizations as a graph was shown.

“There are fewer than 5,000 minors hospitalized with COVID right now.” pic.twitter.com/0qRwHVMfb1

But hey, nobody expects a lawyer to understand numbers. One thing lawyers should understand, though, is that the Founders never expressed a desire to build a wall between Church and state. That came from Thomas Jefferson’s pen in an 1802 letter long after the First Amendment was ratified.

The Founders’ concern was only that the government would not control or mandate worship or keep people away from institutions based on their faith. But that didn’t stop a Supreme Court justice from assigning that idea to the Founders:

Stotomayor says “I don’t understand why the states would have power but the federal government wouldn’t.” That’s basically the mantra for her approach to everything. #SCOTUS

And during the hearings on Dobbs, Sotomayor argued that fetuses are kind of like dead people, so why not kill them:

Justice Sotomayor trying to argue that in dead people, the foot will recoil. “Spontaneous acts by ‘dead brain people‘ so I don’t think a response by a fetus necessarily proves there is sentience of pain or consciousness.” “What changed in the science,” she pushes further.

Sadly, none of the above examples of foolishness, ignorance, or real depravity explain why the leftists want Sotomayor off the court. According to Politico, their real concern is that, like Ruth Bader Ginsburg, if she doesn’t retire during a Democrat presidency, she may die during a Republican presidency.

The worry is not unfounded, given that Sotomayor is 68 and has Type 1 diabetes. One certainly hopes she’s managing it well, but it is a risk factor in terms of longevity.

While Brian Fallon, who heads Demand Justice, the organization that drove a truck around D.C. insisting that Justice Breyer should retire, doesn’t see the situation as urgent, there are some who are very worried about Sotomayor pulling a Ginsburg:

“Fallon’s position isn’t echoed by everyone. Some Democrats close to the Biden administration and high-profile lawyers with past White House experience spoke to West Wing Playbook on condition of anonymity about their support for Sotomayor’s retirement. But none would go on the record about it.”

Indeed, right now, the only thing that’s saving Sotomayor from the pressure that drove Breyer, an old White man, from the bench is Sotomayor’s identity: “They worried that publicly calling for the first Latina justice to step down would appear gauche or insensitive.”

Sonia Sotomayor seems like a nice woman, and she’s certainly a hard worker. She should never have been on the Supreme Court, but I’d prefer to see her stay there for the next two years.

If you look at Justice Ketanji Brown Jackson, who has no idea what a woman is (i.e., what she is) but feels that “minor attracted persons” are misunderstood, you realize that, while Sotomayor is a dim, leftist bulb, whoever comes along after her during a Democrat administration will be worse.

Despite institutional hurdles to an honest election, Republicans may yet win in 2024, at which point we hope for better than the latest Republican hires.

Speaking for myself, however, I will never forgive Gorsuch for giving the imaginary idea of “gender identity” full civil rights protection or Kavanaugh and Barrett for repeatedly siding with the leftists on the Court.

Andrea Widburg is the deputy editor of American Thinker.