2 The Point News » Guest Authors » Members Only » THE VOTING MORONS 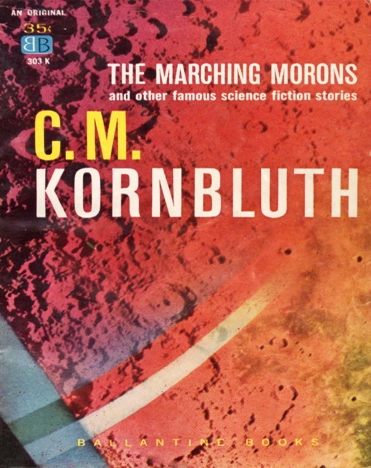 You know the story: a man wakes up after a century-long bout of suspended animation to find… orbital colonies? Contact with aliens? Cheap universal fusion power?

Nope – he finds a culture inhabited by ill-dressed goons speaking in monosyllables, with no understanding of history or the natural world or anything else, surrounded by shoddy, fake technology. The president is a dreadlocked idiot. The average IQ hovers around 65.

Except that it isn’t — it’s “The Marching Morons,” a 1951 short story by C.M. Kornbluth. That’s where the producers of Idiocracy got it, without acknowledgement, knowing that the current run of morons wouldn’t recognize it.

The theme and most of the details are identical: the intelligent and educated failed to reproduce, leaving the world to be populated by the subnormal. Except that while Idiocracy is slapstick comedy, “Morons” is high tragedy – in fact, tragedy of the highest sort, one that mourns the loss of an entire civilization.

We’ve haven’t reached the state of Idiocracy or “Marching Morons” as of yet. But from the evidence of the midterms, we’re a good halfway there.

We now have two mentally damaged individuals in high office in this country, neither able to function as an independent adult. How did they get there? By being elected… with the addition of other means.  But it was the votes that created a situation where those “other means” could work.

In other words, the moron vote played a large role.

Tens of millions of voters who can’t recognize a mentally crippled individual when they see one. Who witness electoral cheating in front of their eyes as clearly as that of a three-card monte dealer but don’t see it for what it is.

Who simply can’t make the connection between the close of critical pipelines and gas costing six bucks at the pump. Who could not define “inflation” at gunpoint, don’t understand that it’s always caused by government policy, and view it – if they view it at all – as something of an act of God.

Who have utterly forgotten the peak state that this country enjoyed only two years ago. Who think “we’re going to make you eat bugs,” is a joke. Who are easily persuaded, easily manipulated, easily confused, and easily run into the slaughterhouse.

How did it get this way? In truth, the term “morons” isn’t strictly accurate. Many – even most – of these people are of average intelligence, and should be able to figure their way out of a rat maze with little problem.

The difficulty arises due to the fact that they have been relentlessly dumbed down for the better part of a century by an utterly corrupt educational system backed by bureaucrats and pols acting in full approval of the process.

I come from a family of teachers, so don’t tell me I’m wrong. For evidence, I suggest consulting any recent college educational course or teacher’s handbook.

For instance, in a Whole Word handbook published in the 1980s, you will find the statement, “We do not feel obligated to prepare students to be cogs in an industrial machine.”

“Whole word” was an academic fad for teaching reading that depended on teaching recognition of individual words – nothing at all of phonics or the alphabet that had successfully served children for centuries. Reading scores plummeted and high schools began graduating students who were functional illiterates.

The educational system has never really recovered. Once standards fell, they remained just where they were. So these educators were intent on not teaching kids how to read, in order to pave the way for the great proletarian revolution. And that’s only one example.

The result is a large cohort marked by ignorance, naivete, flightiness, emotionalism, and frivolity. That has no grasp of how the world works, even the parts of it that directly impinge upon themselves.

That thinks in terms of soundbites, buzzwords, slogans, and images. That is used to stumbling through life with invalid information or none. That has no idea how to obtain a more elevated viewpoint, or even that such a thing exists.

That’s how we get purple-haired kids who think they can change their “gender” by making a wish, well-groomed suburban moms who think that, “I believe that Joe Biden… (lengthy, meaningful pause) cares about people…” is a profound statement, mob hysteria over useless medical masks, and billionaires who got that way by creating software that enables people to communicate with imaginary friends.

We also get people who can vote for a Biden or a Fetterman and think they’ve done their duties as a citizen. In other words, you get an electorate comprised largely of semi-morons.

Before we despair, let’s not forget that most of the Left also fits this mold. Those Saks-wearing moms and kids with the rainbow ‘dos are all of the Left, and are becoming more typical exemplars every day.

The well-read Marxist with the carefully researched arguments is a thing of the past. It’s all howling Antifa punks and cowering postgrad wimps now. Just consider the ideological cannibalism created by wokism, all those brave lesbian coffeeshops and the like driven out of business by their own “collectives” protesting subconscious racism, ableism, or whatever.

That’s the current climate of American leftism, and it will get worse.

The beauty of all this is that people operating on such a level are easily influenced. Without principles, or knowledge, or trustworthy information of any sort, they can be swayed by very simple processes of button pushing. They can’t be persuaded, or convinced, but they can be manipulated.

We will need to get better at this.

As far as elections go this bloc will remain a critical element for as far ahead as anyone can see.

After some rough patches, a future American society will be run by graduates of private schools and the home-schooled, not to forget the intelligent self-educated (which is what the Internet is actually for). Along with purpose-designed AIs and expert systems, this should present little challenge.

That may not be the optimum solution, and it’s certainly not the solution that we’d prefer. But it is a solution.

J.R. Dunn is the associate editor of The International Military Encyclopedia, and author of Death by Liberalism.