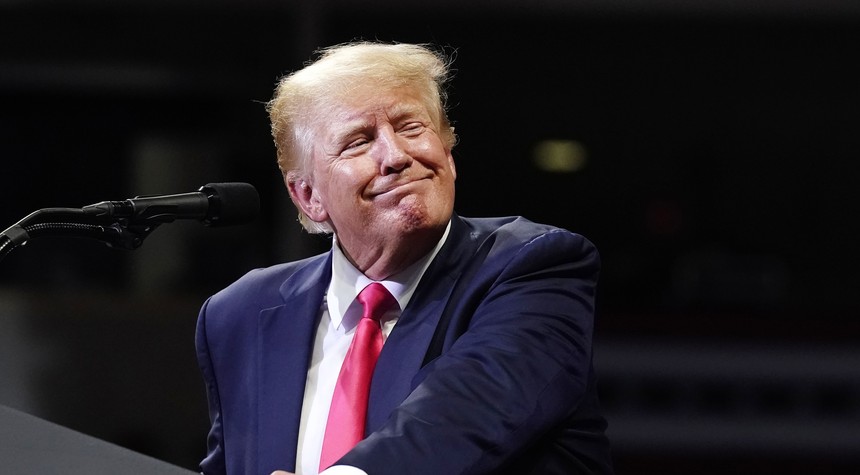 Ron DeSantis is scaring the hell out of the Left. This makes me very very happy. As a huge fan of DeSantis I get shivers of delight every time the Leftists attack him.

How scared are they? Scared enough that they are developing a new appreciation for famed Devil, Russian mole, and confederate insurrectionist Donald Trump.

Suddenly Trump is a charming eccentric with soft edges, unlike the meaner and more competent Florida governor. It’s almost as if all those mean things said about Trump weren’t entirely warranted. 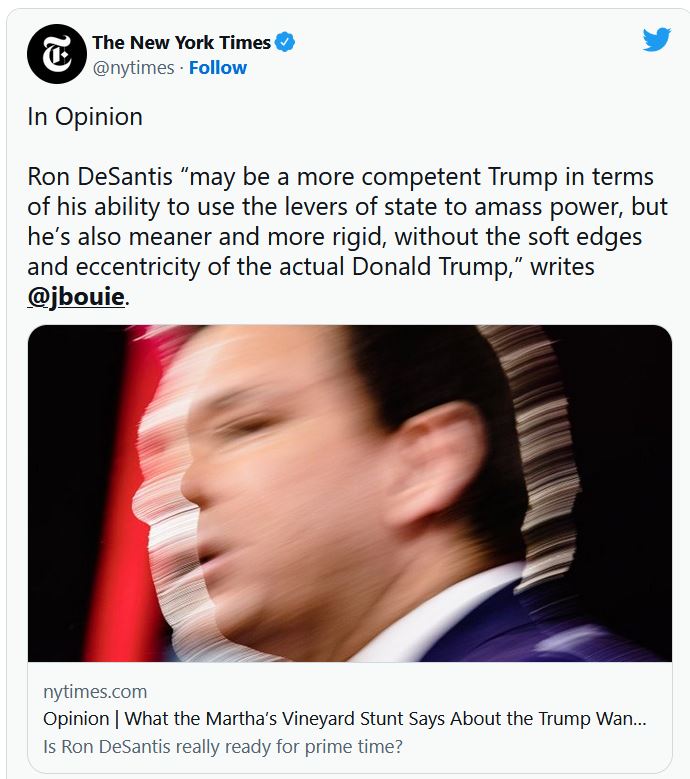 What makes Ron DeSantis so much worse than Devil…I mean Donald…Trump?

He is really really good at owning the libs in a way that is difficult for them to fight back, while Trump is much easier to demonize. Worse, he understands how to use the levers of power in a way that leaves Leftists much more helpless than Trump ever did. They haven’t figured out how to combat him, and screaming NAZI!!! a thousand times hasn’t had the intended effect. DeSantis is on a roll and panic is setting in in both Washington and DC.

The MSM has decided that DeSantis is a greater threat to their power than Trump, and consequently they are discovering that Trump ain’t so bad after all.

So the New York Times is trying to gaslight Republicans by warning us that Ron DeSantis isn’t quite ready for prime time.

[W]hen viewed from the perspective of partisan media, DeSantis looks almost unstoppable. But to a typical person — someone who may have heard about these stunts but doesn’t know much about DeSantis otherwise — he looks a lot like a bully, someone willing to play high-stakes games with people’s lives for the sake of his own ego and advancement.

I’m not sure DeSantis looks like a bully to anybody but people who would never in a million years vote for a Republican, and frankly those of us who know that getting rid of Nancy Pelosi and Joe Biden’s grip on power is vital to saving the country don’t care what these people think. If you think Biden is good for the country, you are living in an alternate universe and I wouldn’t even bother trying to convince you that the sky is blue. Not worth my time. I would refer you, however, to the nearest mental health facility if it would make a difference.

More from the intrepid Jamelle Bouie at the Times, emphases mine:

Well, you might say, Donald Trump is a bully, too. Yes, he is. But Donald Trump is also a lifelong celebrity with a public persona that is as much about “The Apprentice” and even “Home Alone 2” as it is about his political career. What’s more, Trump has the skills of a celebrity. He’s funny, he has stage presence, and he has a kind of natural charisma. He can be a bully in part because he can temper his cruelty and egoism with the performance of a clown or a showman. He can persuade an audience that he’s just kidding — that he doesn’t actually mean it.

Yep. Suddenly the Times has discovered that Trump likes to be hyperbolic…something each and every one of us who has roared with laughter when Trump gives one of his famously ridiculous and entertaining rallies already knew. Trump doesn’t always mean what he says literally. Who knew? Why has this not been pointed out literally every single time the MSM calls some hyperbolic claim of Trump’s a lie?

Republicans might want to temper their hopes for a DeSantis run for president because he is just not as lovable as Trump, you see. DeSantis is mean. He can be cruel. He uses power in a way that Leftists don’t like. Unlike Trump, who was practically a teddy bear, when you come to think of it…

Ron DeSantis… may be a more competent Trump in terms of his ability to use the levers of state to amass power, but he’s also meaner and more rigid, without the soft edges and eccentricity of the actual Donald Trump. DeSantis might be able to mimic Trump, in parts, but he does not have the temperament or personality to be another Trump.

This doesn’t mean that DeSantis cannot win the Republican presidential nomination or even the presidency; of course he can. What I think it means, however, is that his Trump 2.0 act might fail to reach the marginal voters who liked Donald Trump for his persona and performance more than for his positions or policies. It means that on a national stage, DeSantis might flop like one of his stunts.

So really, Republicans, best you avoid considering DeSantis for higher office. Some folks might find him to be less warm and fuzzy than we all find Donald Trump. I mean, honestly, who has every criticized that guy as being mean?

What’s hilarious is that DeSantis’ so-called “stunts” only flopped in the sense that they worked. They pissed off liberals something fierce, which in turn means that liberals think they failed. They put attention exactly where DeSantis wanted it, and that is why DeSantis must be stopped.

It might sound cynical of me to say, but I almost suspect that Jamelle Bouie doesn’t actually believe that Ron DeSantis is not ready for prime time. He might not even believe that Donald Trump was a charming scalawag beloved by all.

He might even be…hear me out now!–a bit scared that Ron DeSantis could beat any Democrat alive in a run for president and is scared to death of that possibility.

I know that is harder to believe that accepting him at his word that he finds Trump charmingly roguish, but I suspect it just the same. Call me cynical.

David Strom is a reformed academic, which means he has a modicum of common sense. He has been a political and policy advisor as well as a speechwriter in 3 gubernatorial campaigns, several Congressional campaigns, and a US Senate campaign.