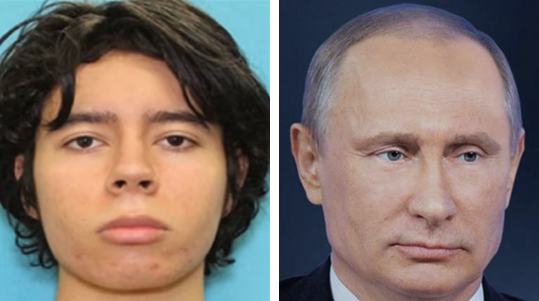 Here are the world’s two most infamous mass-murdering psychopaths of this week.  It’s understandable that the shock, horror, and mourning over the victims of the one on the left is now far greater than over those of the one on the right.

You see the pictures of the 19 4th grade children (along with their two teachers) senselessly slaughtered in Uvalde, Texas on Tuesday (5/24) and your heart breaks.  The only miniscule bit of recompense is that the monster who took their lives got his head blown off as he deserved.

Such a fate should be the least of what the other monster above deserves, since his senseless crimes in Ukraine dwarf those of Uvalde by many orders of magnitude.  Yet that is the terrible irony of Stalin’s observation.  The crimes being perpetrated on the people of Ukraine are so massive it overwhelms us.

We cannot cope with tens of thousands of innocent defenseless human beings being butchered, the mass rape of countless women and even babies, millions left homeless as scores of cities are bombed into rubble, over a million enslaved in Russian “filtration” concentration camps.  It’s hard enough to emotionally process the horror of Uvalde much less the attempted genocide of an entire large nation in Europe.

But we have to, so we may retain our moral decency.  We have to have the moral courage to face reality and recognize that Western Civilization is faced with another Hitler – no hyperbole, for real this time.

On Monday (5/23), 4 days shy of his 99th birthday, a decrepit man from the past showed the world he does not have that moral courage.  By video addressing the globalists of Davos, he declared that Ukraine must trade its land for “peace.” 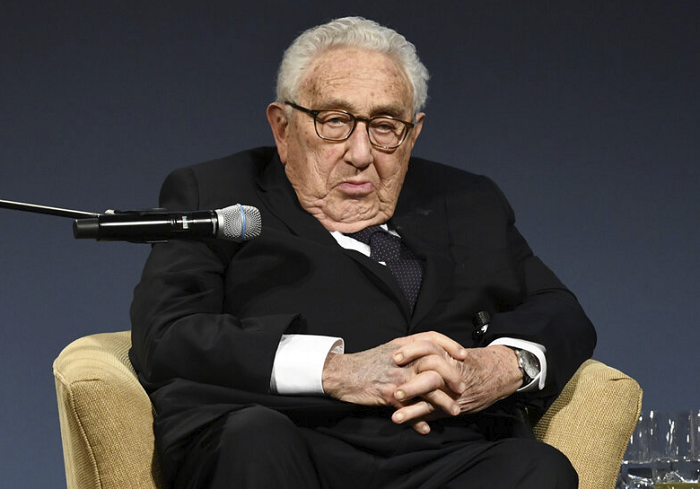 On Wednesday (5/25), the Leader of the Free World delivered his riposte:

Back to the Uvalde homicidal maniac.  For many woketards, the real tragedy is that he isn’t White.  His being Latino is such a bitter disappointment as it blows this huge hole in their “white supremacy” guilt & power trip.  E.g, NY Post yesterday (5/26): LA Times Columnist Shocked Texas School Shooter Salvador Ramos Was Latino.

Just who this guy was besides being “Latino” seems to be a genuine mystery – at least to the media.  There’s no part-white ancestry so they can’t call him a “White Hispanic” like George Zimmerman.

His mother is Adriana Reyes, whose mother is Cecelia Martinez Gonzales – the grandmother Ramos shot in the face  — while her  father is Rolando Reyes. How about shooter’s father, Salvador Ramos, Sr.?  Where did these people come from?  What country – or have the families been here for generations?   Media silence.  Where was Ramos, Jr. born?  No evidence it was “North Dakota,” as a local politician claimed. Texas, Mexico, where?  Media silence.

Bottom line here is – no excuses.  Like so poor he kept wearing the same jeans to school and other kids ridiculed him.  Yet he had a job at Wendy’s and could afford to pay $1,800 cash for an AR-15. His mother begs the parents of the children he murdered to “forgive him,” because she knows “he had his reasons.”  His father insists he was “a good person,” and that people should not call him “a monster” because “they don’t know anything he was going through.”

Listen up, you disgustingly immoral excuses for parents – no one cares about your son’s reasons or problems.  He remains an irredeemable monster, human garbage who fully and completely deserved his fate.

And the same goes for Putin.  There is no excusing him anymore than Ramos. No excuses for drinking Kremlin Kool-Aid. He has chosen to become an irredeemable monster, human garbage who deserves the same fate.

That day may not be far off. On Tuesday (5/24): Kremlin Officials ‘Are Already Discussing Who Will Replace Putin’ Because ‘There Is An Understanding He Will Not Run The Country In The Foreseeable Future’

“Top-ranking Russian officials are said to be plotting a government without Vladimir Putin after Kremlin sources claimed the Russian President has turned almost everybody against him amid the invasion of Ukraine.

Three months to the day since Russian tanks first rolled across the Ukrainian border, a government source told Russian-Latvian outlet Meduza ‘there are almost no people who are satisfied with Putin’ among Kremlin officials and Russian elites.

‘Businessmen and many members of the government are unhappy that the president started the war without thinking about the scale of the sanctions – it is impossible to live with such sanctions,’ the source said – a sentiment which was later corroborated by two other government insiders.”

And this morning (5/27): Russia Turns On Putin: Politicians Demand ‘Immediate Withdrawal’ From Ukraine As 100 Servicemen Are Fired For Refusing To Take Part In The Invasion

“Protests over the war are growing as a veteran legislator issued an appeal to Vladimir Putin to stop military action, bring his troops home, or risk even more orphans. Such a scene in a regional assembly caught on video was unthinkable until now, as a Communist deputy Leonid Vasyukevich, 69, blasted the use of Moscow’s servicemen in Ukraine. ‘We demand the immediate withdrawal of Russian troops from Ukraine,’ he stated.”

Also, check the Twitter feed of #RussianResistance.  All kinds of juicy reports with pics/videos of sabotage of military trains and installations throughout Russia. (If a report is in Russian you can quickly/easily translate it with Google Translate.)

Here, for example, is Russia’s most popular rock star, Yuri Shevchuk, condemning Putin in no uncertain terms to a huge cheering crowd of his fans last week (5/19):

And there’s fun – like this platoon of Ukrainian soldiers singing and dancing in praise of their Bayraktar armed drones that are blowing up Russian tanks and APCs filled with invaders.

As Russia continues its slide into collapse, let’s take a look at its big neighbor to the east – China.  What’s going on there right now has to be the strangest event currently on earth: Chicom China is in the process of committing suicide.

Take for example this morning’s (5/27) story in ZeroHedge: China Paralyzed As Feud Erupts Between Xi And Li Over Covid Response.

Premier Li Keqiang wants keeping China’s economy going to take precedence over Xi Jinping’s “zero covid” mania and unfortunately (for China), Li is losing.  Thanks to Xi, all three of China’s major import-export hubs – Guanzhou, Shanghai, and Beijing-Tianjin – are in lockdown.  This borders on the suicidal for China’s economy and thus Chicom political power.

I found geopolitical analyst Peter Zeihan’s discussion of this interesting enough to suggest it to you.  It’s in two parts, one 5½ minutes, the second is another 6 minutes (wait ‘till you hear what’s happening to all of China’s pigs so Chinese have mostly just rice to eat).  Zeihan calls this presentation The End of Chinese Manufacturing:

I can’t resist one more. It’s a 12 minute webinar he held for a small group of US military officers who ask good questions.  This one focuses on China’s demographic collapse – which, he says, will come before the end of this decade… or sooner.  That’s why he entitles this China’s Last Year:

By noon today (5/27), both teams of lawyers made their closing arguments in John Durham’s prosecution of Clinton lawyer Michael Sussman accused of lying to the FBI, and has now gone to jury deliberation.  Whatever the verdict, the trial has performed a great public service:

How then, did Mueller’s $40 million Trump-Russia investigation “miss” this, asks  Sundance:

“How did Robert Mueller and Andrew Weissmann spend 2 years investigating Trump-Russia; with a team of 19 lawyers, $40 million in resources, 40 FBI agents, 2,800 subpoenas, 500 search warrants and 500 witnesses; and not find out that Hillary Clinton created the hoax they were investigating?”

The answer he says is “infuriatingly rhetorical” – because the entire purpose of the “investigation” was to coverup Hillary’s creation of it.  So what’s Durham’s next move, whatever the verdict?  Better be to “lock her up!”

*Ohio Court Rules Google May Be Designated a Common Carrier. This is a Big You-Know-What Deal.

“Under U.S. law, common carriers are subject to strict regulations about who they can and cannot deny service to. Along with businesses categorized as public accommodations, they are expected to provide service to all paying customers on a non-discriminatory basis. Examples of common carriers in the U.S. include utilities and telecommunications companies.”

No phone company, for example, can censor or prevent a call of yours because of your saying something it thinks is politically incorrect.  Google may have to live with those rules – and hopefully Twitter, Facebook and others may have to follow.

Oh, and let’s have a high-five for the Mayor of Uvalde, Texas, Don McLaughlin.  When a press conference held in Uvalde by Gov. Abbott the day after the massacre (5/25) was boorishly interrupted by obnoxious anti-gun woketard “Beto” O’Rourke, McLaughlin shut him up and kicked him out.

This has been a difficult week of awful tragedy, human monsters, local police too cowardly to save children’s lives while handcuffing and tasering parents who were trying to – yet there were heroes as well.  Not of the local police but those of the Border Patrol.

Be inspired by the story of Border Patrol Agent Jacob Alvarado: Hero cop rushed to Texas massacre school from barber’s with shotgun to rescue 20 kids including his daughter, eight, after wife who teaches there texted him saying: ‘There’s an active shooter. Help’

And by his yet unnamed Border Patrol colleague who blew Ramos away before he could murder more childred: PICTURED: Grisly head wound and bullet-ridden baseball cap worn by hero Border Patrol agent, who stormed Texas school and killed gunman, show just how close he came to being killed himself.

Deepest thanks and appreciation to them both.  Best to you all on this solemn Memorial Day weekend.