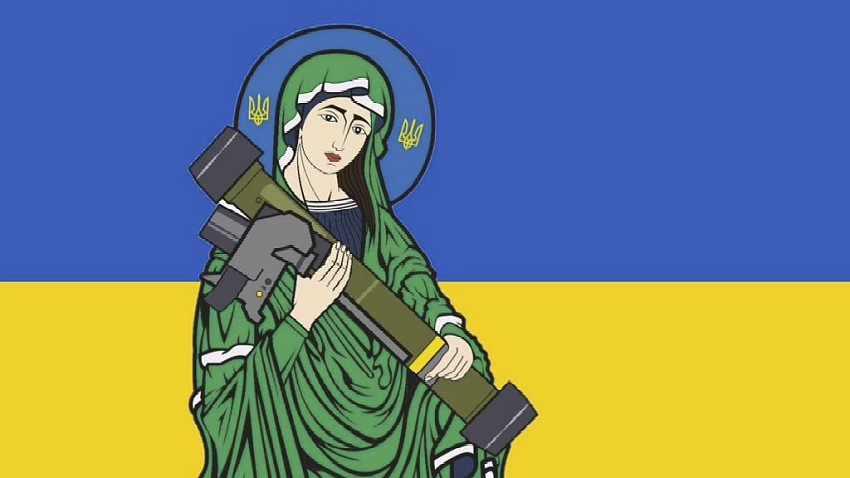 For the people of Ukraine, Mary Magdalene – to whom they have prayed devoutly for many centuries – is today reconfigured as Saint Javelin.  Her halo features the Ukrainian Trident, and she embraces not a candle but an American FGM-148 Javelin anti-tank missile launcher.

Why?  Because the Javelin has become the symbol of Ukrainian armed resistance to Putin’s invasion by blowing up hundreds of Russian tanks, APCs, and other war weapons.

And how did Ukraine’s military first get American Javelins?  From President Trump, first in 2017, again in 2019, and lastly at the end of 2020.  Those 300 Javelins that Xiden said he sent last January were those first authorized by POTUS.

Which is why in his CPAC speech on Saturday (2/26) he stated: “I gave Ukraine the Javelins that everyone is now talking about and millions of dollars of other military equipment—the Obama administration gave them blankets.”

POTUS made clear his view on what Putin has done and whose side he is on:

“Joe Biden has turned calm into chaos, competence into incompetence, stability into anarchy, and security into catastrophe. The Russian attack on Ukraine is appalling; it’s an outrage and an atrocity that should never have been allowed to occur. We are praying for the proud people of Ukraine. God bless them all.”

It is no wonder that this week’s issue of Time Magazine, appearing today (2/28), has this cover: 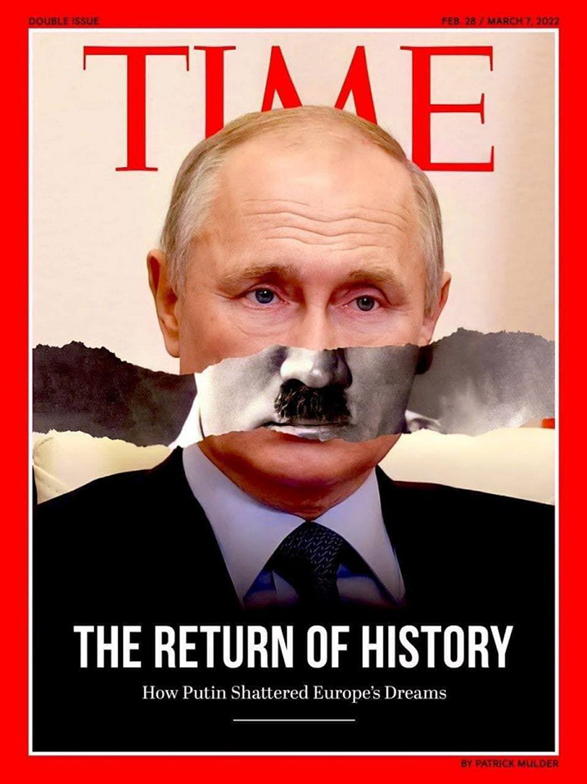 Yet the subtitle is wrong.  It should be, “How Putin Shattered Russia’s Dreams.”  Here is why that is the likely outcome of what is happening in Ukraine right now.

First, this is a true Black Swan event, unexpected and catastrophic – taking the world by surprise as all Putin had to do was make a giant show of force with war games in Belarus, get concessions from the EU, raise the price of oil to over $90 a barrel, and pocket scores of billions.

But no, the hubris that’s ruined so many rulers in history overcame him.  As you know, I am personally familiar with his hubris.  After I easily beat him in arm-wrestling (Irish Times bar, Capitol Hill, October 1996) with our right arms, he insisted on trying again with his left – same result.

In 547 BC, when the Oracle at Delphi told Croesus, the King of Lydia (Western Turkey), that if he attacked Persia he “would destroy a mighty kingdom.” Blinded by hubris, Croesus didn’t realize the destroyed kingdom might be his own – and it was.  Putin is the Croesus of our day.

He told his invading soldiers that they would be welcomed with flowers, that Ukraine was led literally by a joke – a professional comedian – who would quickly surrender.  Big mistake.  Volodymyr Zelenskyy turned out to be Ukraine’s Iron Joker.  When Xiden offered to evacuate him out of Ukraine, he refused with a reply that instantly became world famous: 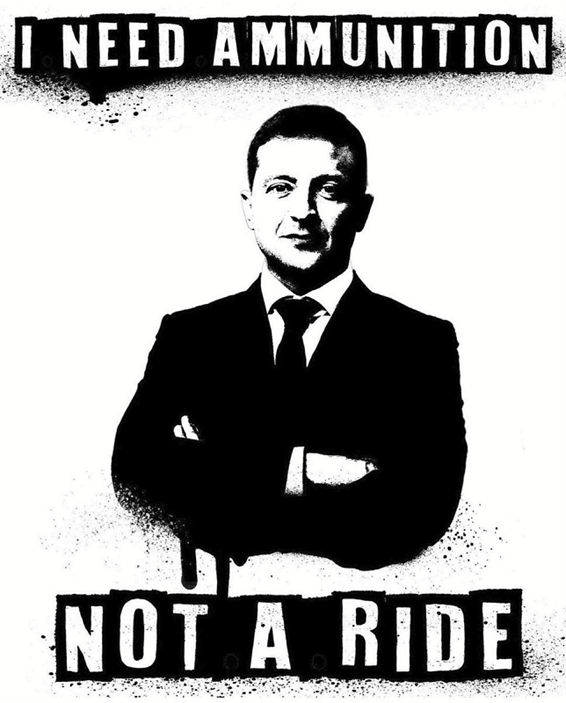 The inhuman barbarity of Putin’s unprovoked attack on Ukraine has been met with Ukrainian heroism that has inspired the world.  Russian convoys like this are being Sent to Hell:

And turned into Russian Death Valleys:

Putin is using BM-21 Grad multiple rocket launchers to carpet bomb cities like Kharkiv and Kyiv.  Here’s a Ukrainian Bayraktar drone strike on one location of them outside Kyiv today (2/28). Wait for the second explosion:

Here is A Personal Message from Ukranian Soldiers to Russian Invaders.  It’s not posted directly due to the colorful language – but being forewarned, please click and watch. These guys are funny, and mean every deadly serious word.

The EU and individual countries all over Europe are pouring weapons of every kind, from small arms to anti-tank missiles to Stinger anti-aircraft missiles and even fighter jets, into Ukraine via Poland, Slovakia, and Romania.

They are also breaking contracts and refusing business with Russian companies across the board. Cyber-warriors have wrecked countless Russian government websites and those of every major Russian bank. The ruble is down 30% just today, with both it and the whole Russian economy falling straight off a cliff. 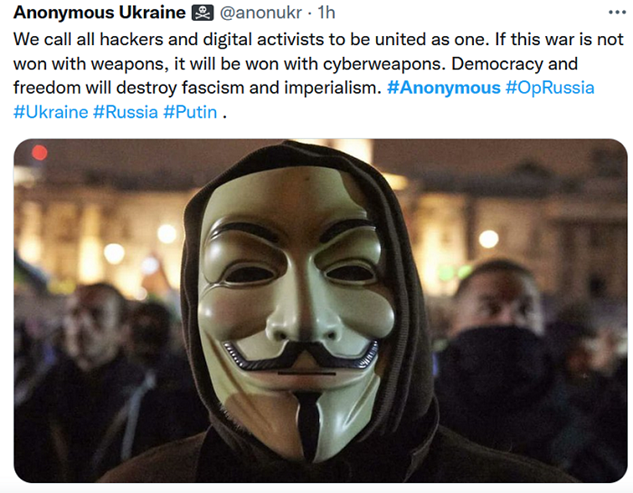 In short, Putin is losing his war.  This will not end in compromise, a “frozen conflict” stalemate.  Ukrainians will keep killing Russian invaders, blowing up their tanks and artillery, shooting down their planes and gunships, and throwing Molotov cocktails at them until Putin gets the hell out of Ukraine:.

Further, no war can be won without logistics, to feed and supply the soldiers, to fuel all the vehicles and aircraft.  The Russians are rapidly running out of all this with Ukrainian forces blowing up all supply lines.

What’s astounding is that Putin has put fully 50% of all Russia’s military forces into invading Ukraine. If the giant Russian military cannot conquer the midget Ukraine military, then Putin’s Russia will be exposed to the world as a Paper Bear, toothless and clawless.

Yes, the bear has nukes – but the instant they are used, ballistic or tactical, it’s the bear’s death warrant as a country.  It will shut off from the world.

Yes, Putin may – as mentioned in last Friday’s HFR – be deteriorating mentally.  Now today (2/28) on Fox:

Yet, if this is being questioned in Washington, you can bet it is in the Kremlin.  It is a quite reasonable bet that a palace coup will remove Putin from power before he orders something truly crazy.  Actually, it’s a good bet he’ll be thrown out of power with all his assets seized and possibly imprisoned for the humiliation and wreckage of Russian power he’s caused.

With all the anti-Putin, anti-dictatorship, anti-war public demonstrations already taking place in dozens of cities all over Russia, it may even be possible that a Russian democrat (small d!) may emerge, like now-jailed Alexei Navalny, to lead Russia as a normal country.

Be that or not… what you need to realize is that we may be witnessing a pivotal event of current world history before our eyes:  Russia ceasing to be a world power.

China’s Xi can see it already and will be first to take advantage, accelerating the conversion of Russian Siberia (the eastern half east of Irkutsk and Baikal) into Chinese Siberia.

Ukraine will be quickly welcomed into the European Union and fully integrated into Europe. Zelensky will be hailed as the Winston Churchill of our age, and will soon be on the cover of TIME, while Putin is tossed into the dustbin of history.  Pray hard Zelensky will survive Putin’s attempts to assassinate him.

Putin is already the world’s pariah.  The Brandenburg Gate in Berlin is being lit up every night now in the blue and yellow colors of the Ukrainian flag, where pro-Ukraine, anti-Putin German demonstrators gather.   Here’s my favorite picture of the scene, summing up what so much of the world thinks of Putin, and what it wants his fate to be.

Note the irony.  The Führerbunker is less than 1,000 feet from where this photo was taken. 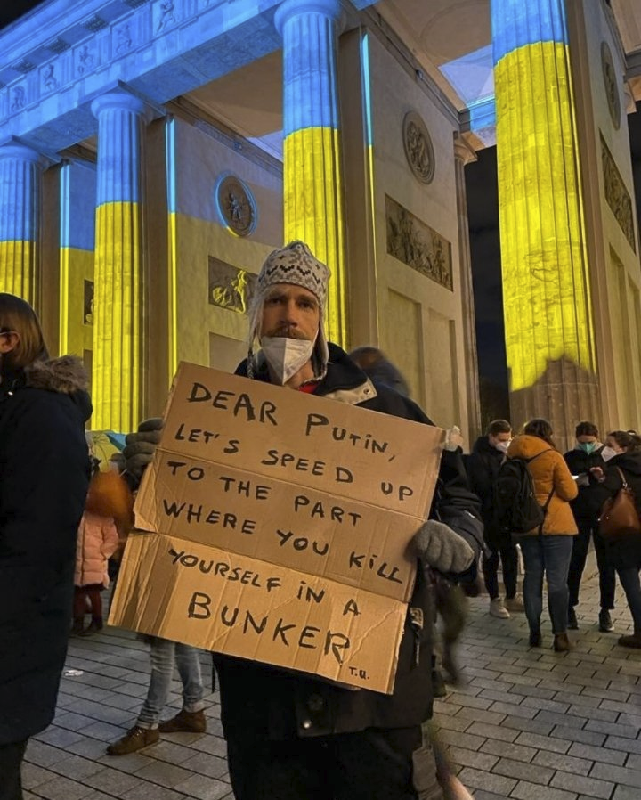