GENETICS IS GOOD FOR YOU

Fifteen years after the first sequencing of the human genome, the genetic engineering of human beings is getting closer. Will that mean designer babies and the rich winning life’s lotteries from the start? And will we ever stop this slither down the slippery slope to playing God?

My answers are: no, and I hope not. Despite dire predictions, almost nothing but good has come from genetic technology so far, and we’ve proved that we don’t slip down such slopes: we tread carefully.

The current excitement is over gene editing. A precise way of doing this, called CRISPR-cas9, is all the rage among the white-coated pipette-users. As usual, the doomsayers are predicting disaster.

Prior to this new fear, we have had bio-ethical worries about six times in the past four decades. In all six cases the results have been far better than feared. Here’s the track record.

MURDAH – THE ULTIMATE RIGHT TO CHOOSE 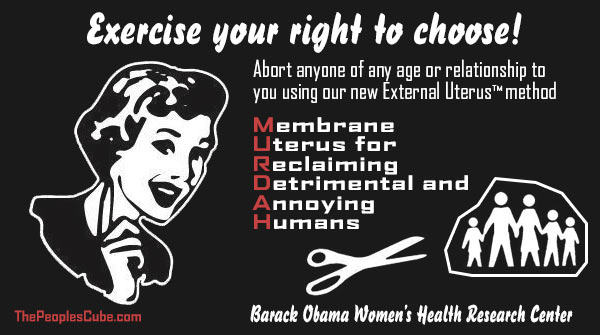 Washington, DC. A child has grown up not how you envisioned? An elderly parent becoming a burden? You need to consider a post-birth abortion! Scientists at the Barack Obama Women's Health Research Center have made an epic advancement in women's health, and the right to choose.

Scientists have developed a method to allow abortions past the third trimester, as explained by the project's lead scientist, Dr. Hillary Sanders:

A WOLVERINE STRATEGY FOR THE SOUTH CHINA SEA

On May 26, the State Council Information Office released an English-language version of the Chinese Military Strategy.

Short, sweet, and immensely more readable than its American counterpart, the PRC’s military strategy is notable for its transition to an overt, “active defense” posture for Chinese military forces. Among the many salient points is the emphasis on gaining “the strategic initiative,” which is one of eight specified strategic tasks for the Chinese military.

Recent activities in the South China Sea (SCS) illustrate the reality that China has already seized the strategic initiative in those waters.

A passive U.S. response will only continue to demonstrate to China the usefulness of its approach. We need the opposite of a passive response.

A wolverine is a nasty, aggressive predator that is not only difficult to eat, but dangerous to be around and worth avoiding. A “wolverine” strategy, intended to improve the offensive counterair and countermaritime capabilities of SCS nations threatened by China – Vietnam, Malaysia, and the Philippines – would hold part of the key to neutralizing China’s initiative.

PULL DOWN THE SLAVER FLAGS OF ISLAM AND LA RAZA

The return of the Confederacy was averted in the summer of 2015 when major retailers frantically scoured through their vast offerings to purge any images of a car from the Dukes of Hazzard.

Slavery does not exist under the Confederate flag eagerly being pulled down. It does exist under the black and green flags of Islam rising over mosques in Iraq, Saudi Arabia and America today.

And if justice demands that we pull down the Confederate flag everywhere, even from the top of the orange car sailing through the air in the freeze frame of an old television show, then what possible justification is there for all the faux Aztec knickknacks?

Even the worst Southern plantation owners didn’t tear out the hearts of their slaves on top of pyramids. The romanticization of Aztec brutality plays a crucial role in the mythology of Mexican nationalist groups like La Raza promoting the Reconquista of America today.

Lebanon is a sad and desperate place. And its disastrous fate is personified today by its prime minister. All who claim to love freedom, democracy, human rights and dignity should take note of Saad Hariri's fate. They should recognize that his predicament is a testament to their failure to stand up for the ideals they say they champion.

DOLLAR VS. THE EURO

Do you think the U.S. dollar will continue to fall against the euro? First-quarter economic growth in the U.S. was just revised down to only 0.6 percent while the euro area grew 3.1 percent, and the U.S. dollar reached an all-time low against the euro in April. (In July 2001, it only took 84 U.S. cents to buy one euro; last week it took $1.34 to buy that same euro.)

Those who have been pessimistic about the U.S. economy (some from the time Ronald Reagan was elected) crow they are right, given the first-quarter number. But, before counting out the U.S., it would be wise to look at the data. Changes in economic growth rates most often are due to changes in tax, regulatory, trade, government spending and central bank policies, much like a runner's speed will decrease if he gains weight and increase if he slims down.

In the 1950s and 1960s, Europe was lean and hungry and ran quickly to rebuild its war-ravaged economies. By the 1970s, it had begun to put on the fat of higher taxes, government spending and regulation. As a result, its growth rates fell and for the last quarter-century, Europe has grown more slowly than the U.S.

But then, not to be outdone, the Washington political establishment did some really dumb things over the last few years, which have taken away much of the benefit of the Bush tax cuts. Read more...
Dr. Jack’s Classics