2 The Point News » Articles by: Richard 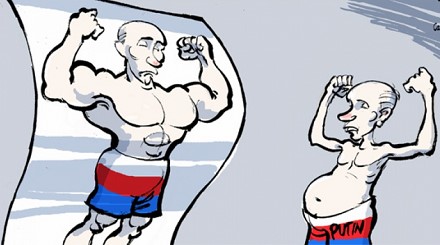 Russia’s economy was smaller than that of Texas even before the latest and most lethal sanctions imposed by Washington.

It has diminished further to Benelux proportions after the ruble’s 10% crash this week, the steepest fall since the late Nineties.

Upon this slender economic base, Vladimir Putin’s Russia is posing as a world-class superpower, the new master of the Middle East, insisting on its ‘droit de regard’ over the old Tsarist realms as if by natural right.

What is extraordinary is than anybody should believe in such geostrategic posturing.

The harsher truth is that Mr. Putin squandered the windfall wealth of the commodity supercycle and hollowed out what remained of the Soviet industrial and engineering base, leaving Russia’s Potemkin economy in a futureless cul de sac.