WHAT TRUMP CAN DO ON IRAN RIGHT NOW 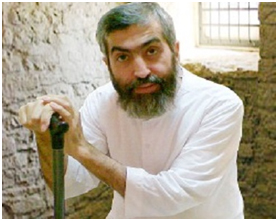 Ayatollah Boroujerdi in his prison cell

[ssba]The great Ayatollah Hossein Boroujerdi is briefly out of Tehran’s infamous Evin prison, where he had been held in miserable conditions for a decade.

He is one of those dissidents who are so beloved by the Iranian people that the murderous regime of Ali Khamenei does not dare to put them to death, or even on trial.  They routinely torture them instead, and deny them medication for their grave ailments, hoping that they will die of “natural causes.”

He remains one of the most revered men in Iran.  At the time of his arrest, he operated a hundred telephone lines to assure ongoing contact with his followers and allies, and his public meetings were so well attended that he was forced to hold them in a public stadium.

He’s out on parole, but don’t think the regime is showing mercy. They typically release prisoners for a few weeks at a time—that way everyone sees the miserable state to which they have been reduced—and then drag them back.

I have for years called on human rights advocates and political and religious leaders to campaign for his release. Now there is something President-elect Trump can do right now.

Ayatollah Boroujerdi threatens the regime for two reasons:  he advocates toleration of all religious (and non-religious) beliefs, and, in keeping with Shi’ite tradition, opposes the involvement of religious leaders in politics.  Years ago, he said  “the regime is adamant that either people adhere to political Islam or be jailed, exiled or killed. Its behavior is no different from that of Osama bin Laden or Mullah Omar.”

He has repeatedly criticized the fundamentalist doctrines of the Iranian theocratic state, and has dramatically spoken about the most explosive issues in the Muslim world, including anti-Semitism.

In 2010 he sent Hanukkah greetings to the Jews of the world, saying “any religious belief that brings us closer to the Source (God) is the truth. This force will lead humanity towards enlightenment. On this great day, we celebrate the unity among the believers of God’s light.”

Now that he is out, we have a formidable opportunity to help our kind of Iranian, deliver a stunning message to the Islamic world, and reassert our national values.

Donald Trump should invite Ayatollah Boroujerdi to the inauguration.

Such a dramatic move would deliver several important messages:

–Show our support for the brave, honorable dissidents in Iran.

–Demonstrate that the dreadful period of American support for the expansionist, terror-supporting, mass-murdering tyrants of Tehran is blessedly at an end.

–Show that we understand that there are freedom-loving Muslims, and that we believe they are worthy of Western solidarity.  Our war is with radical Islam, and we intend to win.

Boroujerdi is certainly not the only Muslim dissident we should be helping, but he’s a terrific way to start.

Michael Ledeen holds the Freedom Scholar Chair at the Foundation for Defense of Democracies in Washington, DC.