2 The Point News » Guest Authors » Members Only » WHAT HAPPENS WHEN THE MADNESS ENDS?

WHAT HAPPENS WHEN THE MADNESS ENDS? 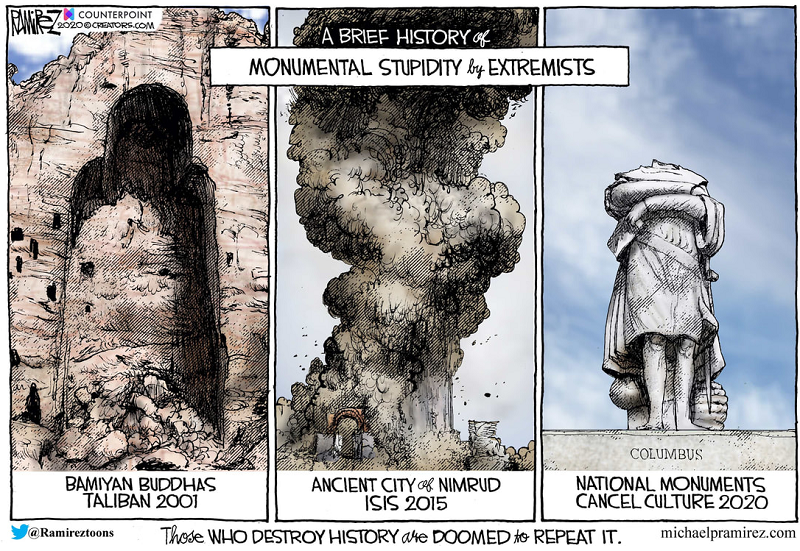 When something cannot go on, it certainly will not go on. But what are the symptoms of what cannot go on and when?

There are two historic red lines and our revolution is getting close to both.

One is when “average” people, both white and nonwhite, who identify neither with Left nor Right, woke nor unwoke, become frightened or appalled by the violence and the anarchy—and thus finally move to dismantle the guillotine as the razor increasingly starts haircutting friends, idols, and compatriots.

Their verdict can be known either by demonstrating themselves, boycotting, voting, or massive civil disobedience. At some point, tonight’s hero on YouTube torching Wendy’s or kicking a downed policeman on CNN, becomes tomorrow’s commonplace, unnoticed felon—with a new warrant issued out on his head, and about whose fate and lengthy CV no one other than his parents much cares.

Governors and mayors can demand masks and all sorts of social distancing measures. But once they declared that only those not demonstrating—the non-looting and nonviolent—were subject to their rules, while millions both peacefully protesting and violently looting were exempt, then their words meant nothing.

It will be impossible for them ever to be seen as credible again. Virus or no virus, crowded freeways, and busy malls will soon be referenda on the bond of governors like Gavin Newsom and Gretchen Whitmer.

In a few weeks, we are promised that multimillionaire NFL players and coaches in unison will not deign to stand up for the National Anthem. Promises, promises.

TV play-by-play announcers will praise them—or else likely lose their jobs. But millions of Americans simply will decouple from the NFL. Their silent disappearance will make the prior Kaepernick drop-off in attendance and viewership seem like child’s play.

The same will be true perhaps of the more canny NBA, if they foolishly emulate the NFL. Millions will surmise that billionaire basketball players can far better make their billions in China and should—an NBA deity whose dictatorship players and coaches fear and worship while criticizing their own democracy.

Recently, there was murder in the CHAZ/CHOP-shop summer of love, and more random violence. Soon average Seattle citizens will want their city’s core back if only to reclaim their full 911 response.

When the police begin not showing up for assaults, thefts, and break-ins, and criminals do what criminals do without consequences, the proverbial victims and vulnerable will have had enough and either move away or organize.

Governor Cuomo and Mayor de Blasio vie for televised braggadocio. But when the cameras leave, and they will soon, both will be left with billions of dollars in damage, lost commerce, bankrupt budgets, and urban flight.

And their whiny appeals to American deplorables for financial assistance, their attempts at shaming clingers for a bailout, will likely be the stuff of comedy. What will California’s multimillionaire Governor Gavin Newsom do when his silly press conferences end, but his 13.3 percent income tax rate and 47-cent gas tax still don’t come close to closing his $50 billion annual deficit?

Give more adolescent lectures about how the virus and lockdown are “reimagining a progressive era as it pertains to capitalism”?

When Important People Find Themselves Out of Luck

Second, when important people start to suffer the concrete consequences of their own abstract ideology, then the revolution sputters—in the manner that #MeToo Tara Reid got nowhere in accusing Joe Biden of a brutal sexual assault.

Suddenly, handsy and heavily breathing Joe who once swore “women must be believed” appealed to statutes of limitations, presumptions of innocence, and the right to cross-examination as if he were Robespierre suddenly deploring the promiscuous use of the guillotine.

When hysteria fades, so too the current Antifa/BLM movement will go dormant to go enjoy the millions that they garnered from terrified virtue-signaling corporatists.

When pistol-packing, AR-15 toting Raz Simone declares himself exempt from his own past homophobia and repulsive N-word vocabulary, and struts armed to the teeth at the head of his posse while blocking the police from aiding those shot and dying, then there is no society left.

And those who want society back at some point will act, whether silently or visibly. Either Raz will be arrested—or bought off by a social justice Seattle billionaire and retired to a gifted lakeside home. Either way, he will go soon.

For all the conservatives who virtue signaled that Confederate statues had to come down now, the logical trajectory of their acquiesce was the toppling of Ulysses S. Grant, Columbus, and Father Junipero Serra, and the defacements of Lincoln, Jefferson, and Washington.

And it won’t do to deplore the mob’s insanity when it turns on abolitionists, Cervantes, and black Civil War veterans. After all, from the time of the dismemberment of Helvius Cinna the Roman poet, that’s precisely what mobs do when appeased: turn on the innocent without apology.

And behold, not a single former chairman of the Joint Chiefs of Staff or retired military grandee was to be found to tweet out that America ended on that very day when those in the uniform tear-gassed civilians.

Academics are now bombarded in their campus emails with lists of BLM demands and administrative acquiescence to them. But when the smoke clears and the flames subside, they will have to give up their legacy spots at Stanford and Yale to meet demands for mandated increases in the size of the African-American student body.

Will the edgy radical professor in his elbow patched tweed still virtue-signal from the lounge, when his own kid’s 800 English SAT and straight-A prep school grades no longer are considered required admission data, and his salary in no way will match the donor heft of rival Silicon Valley tech parents?

When the frenzy subsides, what will universities themselves say after charging jacked up tuition and room and board costs for indebted students to take their classes on Zoom from their parents’ basements? Will they cite “overhead” or praise the new “digital learning,” or institute “givebacks” of student payments, or claim new diversity coordinators and administrators to combat white privilege necessitate budgetary constraints?

What about Chick-fil-A CEO Dan Cathy — worried about corporate losses from vandalized stores and past bad PR from gay boycotts — who urged that whites wash the feet of black people? What will he do when it is again against the law to loot and deface, and when few of any racial lineage would enjoy such groveling hands on their feet?

The Thermidor Reaction Is Coming

If a revolution is based on the untruth that blacks are daily violently terrorized by whites, what happens when data reveal facts contrary to that narrative?

What happens when people come to understand that in those relatively rare interracial crimes, blacks are far more likely than whites to commit interracial violence? Or when people discover that more than 7,000 blacks are murdered per year by other blacks?

When the hysteria fades, such data reasserts the truth that there is not currently a white racial war against blacks.

Now is the hour of the virtue tweeting has-been celebrity, who wishes to avoid the fate of Jimmies Fallon and Kimmel.

Did the latter two, now on forced sabbaticals, think they are any more important to American entertainment than the beheaded Danton and Hébert were to the revolution of Robespierre and Saint-Just?

In a cultural revolution, radicalism is a fluid and relative state, and no exemption from the violence that one advocates for others.

Just as reformers wanted King Louis XVI to give up some power but not to lose his head, so too peaceful protestors sought to institutionalize accountability for rogue cops.

But also, just as a constitutional parliament was forgotten by the time of the Reign of Terror, so too the legitimate protests over George Floyd’s horrific death are now light-years distant from torching Santa Monica and defacing the World War II monument.

The Reign of Terror will end and the Thermidor reaction is on the horizon.

This morning’s memo-writing social justice executive and administrator will be seen as tomorrow’s rank abettor of McCarthyite persecutions.

And the coveted and esteemed racial arsonist of the moment soon will become the ostracized segregationist.

Americans believe there is one thing more regrettable than a falsifier—and that is an opportunistic and careerist falsifier.

That would be a certain basement-dwelling presidential candidate whose prospects of success this November are rapidly vanishing.