WHAT DEMOCRATS HAVE BECOME 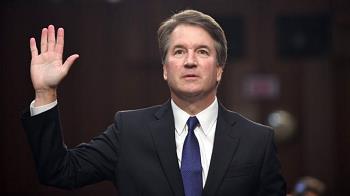 [This editorial was published in the Wall Street Journal yesterday, Sept. 20.  TTP reproduces it here as a public service.]

It is still true: What begins as tragedy can end as farce. So it is with the case of Christine Blasey Ford, who has accused Supreme Court nominee Brett Kavanaugh of assaulting her when she was 15 and he was 17 [36 years ago in 1982].

As of the most recent available moment in this episode, Ms. Ford’s lawyer said her client would not appear before the Senate Judiciary Committee until there is a “full investigation by law-enforcement officials.” Like the Mueller excavations, that could run to the horizon, unable to find anything but unwilling to stop until it finds something.

Let us posit that the one thing not at issue here is the truth. As a matter of law and fact, Ms. Ford’s accusation can be neither proved nor disproved.

This is as obvious now as it must have been when Dianne Feinstein and the other Democrats came into possession of this incident.

Surely someone pointed out that based on what was disclosed, this accusation could not be substantiated. To which the Democrats responded: So what? Its political value is that it cannot be disproved.

They saw that six weeks before a crucial midterm election, the unresolvable case of Christine Blasey Ford would sit like a stalled hurricane over the entire Republican Party, drowning its candidates in a force they could not stop.

In #MeToo, which began in the predations of Harvey Weinstein, Democrats and progressives finally have found a weapon against which there seems to be no defense. It can be used to exterminate political enemies. If one unprovable accusation doesn’t suffice, why not produce a second, or third? It’s a limitless standard.

The Democrats’ broader strategy is: Delay the vote past the election; win the Senate by convincing suburban women that Republicans are implacably hostile to them; seize power; and—the point of it all—take down the Trump government.

This is the “resistance.” This is what Democrats have become.

Resistance is a word and strategy normally found in a revolutionary context, which is precisely the argument made by the left to justify its actions against this presidency since the evening of Nov. 8, 2016. Anything goes. Whatever it takes. Brett Kavanaugh is not much more than a casualty of war.

Rather than try to argue or win public issues on substance, the Democrats have become a party that seems to think it can win with muscle alone.

Environmentalism emerged in the 1970s as a worthwhile idea that attracted the interest and support of both parties. From Al Gore onward, it became a bludgeon to beat up the other party.

Now sexual abuse, an issue originating in utmost seriousness, has been quickly captured and fashioned into a political weapon by the Democrat Left.

Politics as trench warfare has relieved the Democrats of the burden of thought. Extending the Pelosi Rule—we have to pass the bill to find out what’s in it—we now have the Gillibrand Standard.

Commenting this week on Ford v. Kavanaugh, New York Sen. Kirsten Gillibrand, another 2020 presidential aspirant, said, “I believe it is disqualifying, given what we know.” In other words, what she believes is based on next to nothing.

Put on defense by these accusations, Majority Leader Mitch McConnell and Judiciary Committee Chairman Chuck Grassley unsurprisingly agreed to a hearing in which Ms. Ford would tell her story and Judge Kavanaugh would speak. Then the senators would vote.

Consider the spectacle: Judge Kavanaugh’s nomination for the U.S. Supreme Court, the embodiment of a modern rule of law, is being decided in the Senate by the medieval practice of trial by ordeal, such as surviving immersion in fire or ice. Trial by ordeal was outlawed by the Lateran Council in 1215.

Or worse, the standards of the mob in the Roman Colosseum, turning thumbs up or down on the combatants. Though unlike the Senate Democrats, the Roman mob at least had an open mind.

Incidentally, the standard trope that Donald Trump has degraded our politics? We don’t need to hear that anymore. Or about the moral certitudes of the religious right.

Is there a sadder figure in the modern Democratic Party than Sen. Dianne Feinstein? Elected to the Senate in 1992, Mrs. Feinstein has produced a creditable career. Her above-it-all reputation was never quite deserved, but she has at least performed with dignity.

Now, seeking re-election at 85, she is getting heat from the progressive-dominated Democrat Party in California, the world capital of identity-only politics.

By withholding from the committee the accusatory Ford letter that came into her possession nearly two months ago, Sen. Feinstein ensured the nomination’s descent into such a hapless, cynical moment. This will be the most remembered event in Sen. Feinstein’s career.

The Kavanaugh nomination, “given what we know,” has come down to an undiscoverable accusation. The defeat of a Supreme Court nominee on this basis would be a victory for a level of conscious political nullification not seen in the U.S. for a long time.

Republicans in the Senate shouldn’t allow it, and voters in November should not affirm it.

Daniel Henninger is the Deputy Editorial Page Director of the Wall Street Journal.