TYRANNY AND THE BOOGIEMAN OF ISLAM

As you can see, this woman is not Chinese. She’s European, a Celt. Although she looks young, she’s 4,000 years old, born before 2,000 BC – in what is now China. It turns out European Caucasians got to China before the Chinese.

The lady is known as the Beauty of Loulan, where her mummy was found in the ruins of an ancient city on the eastern edge of the Takla Makan Desert:

Pardon the French, but it’s a good map. Takla Makan means “You go in, you don’t come out,” which gives you an idea of how complete a desert it is. 4,000 years ago it was a well-populated grassland ringed with communities. Here’s a sat photo of it now: 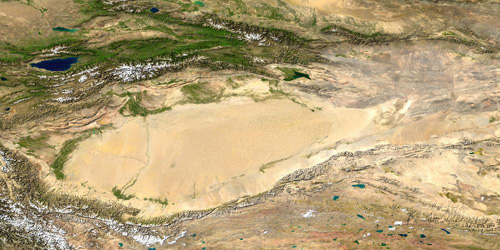 Archaeologists have unearthed hundreds of mummified remains from these ancient communities (many with blonde or red hair), and using DNA analysis, have determined that Caucasians populated the entire area, geographically known as the Tarim Basin, for a thousand years before Han Chinese arrived.

The book to read about this is The Tarim Mummies: Ancient China and the Mystery of the Earliest Peoples from the West by J.P. Mallory and Victor H. Mair.

The Chinese Communists hate this research and are trying to suppress it – for it supports the claim of the Uighur people who live in the Tarim Basin that the region does not belong to China and never has.

DNA testing of the Uighurs (wee-gurz) show they are descended from the original Caucasian inhabitants with an admixture of East Asian genes such as Orkhon Mongol – almost none Han Chinese. They are Turkic, like their neighbors in the “Stans” of the former Soviet Union – Kyrgyzstan, Kazakhstan, Tajikistan, Turkmenistan, and Uzbekistan, collectively known as West Turkestan.

The Tarim Basin is thus known politically as East Turkestan, the difference between the two being that the Western Stans were former Soviet colonies and are now independent, while the Eastern Stan is a still a colony of China and wishes it were independent.

Although the Chicoms call East Turkestan their province of Xinjiang ("New Province"), it has never been looked upon as a part of China proper. The Great Wall ends at a place called Jiayuguan, the gate of which is known as China’s Mouth. It is a terrible curse for a Chinese to be “spat outside the mouth,” to live in Turkestan. Yet any advocacy by a Uighur for autonomy or freedom from Chinese colonialism is a sure ticket to the Chicom Gulag, the Laogai.

The Chicoms are bitterly determined to suppress any hint of Uighur separatism in their East Turkestan colony. Which is why Chicom President Hu Jintao gave Islam Karimov, the Dictator of Uzbekistan, the red carpet treatment in Beijing last month, 12 days after Karimov had a thousand Uzbeks slaughtered in cold blood in Andijan.

You read about the slaughter in Chaos in Kwarezm.

Now why would the Chicoms treat a despised murderous pariah like Karimov as an honored guest, with Hu Jintao proclaiming at a press-covered meeting at the Great Hall of the People that “President Karimov is an old friend of the Chinese people”?

Because both are using the excuse of Islam and Islamic terrorism to justify their tyrannies. The Uighurs, you see, are Moslems just like the Uzbeks.

Chicom Foreign Ministry spokesman Kong Quan summarized in his official statement: “As to what happened in Uzbekistan recently, it is basically a domestic affair, but we firmly support the crackdown on the three forces of separatism, terrorism and extremism by the Uzbekistan government.”

The Uzbeks who were gunned down by the hundreds in Andijan were not Moslem radicals. They were protesting against the tyranny and corruption of the Karimov regime. In order to suppress them, Karimov raises the Boogieman of Islam — exactly as do the Chicoms with the Uighurs.

The Uighurs and the Uzbeks are the most oppressed Moslem communities on earth. Supporting their desire for political and religious freedom is one of the great opportunities the US has right now to do something of substantial real value for the world’s Moslems, to show them that we distinguish between the Islamofascist crazies and the Islamic Boogieman, and are not intimidated by tyrannies who pretend that all Moslems who oppose them are terrorists.

This is a tall order for the feckless denizens of Foggy Bottom. The one guy ready and able to fill the order is John Bolton. Expect him to use his UN Ambassadorship to shine a spotlight on China’s oppression of Moslems. John isn’t afraid of Boogiemen.

Ps: I know you’re asking, so here’s a picture of the Beauty of Loulan’s mummy, from which the science artists rendered what she looked like in real life:

By the way, she was 40 years old, and was six feet one inches tall.