TWO WOMEN IN THE MIDDLE EAST 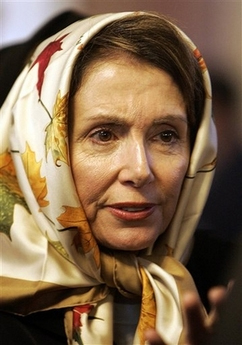 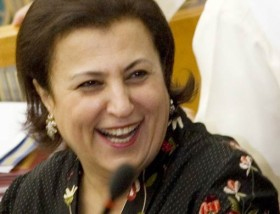 The one wearing the Moslem headscarf or hijab denoting submission and inferiority to men is American, Nancy Pelosi, who demeaned herself in front of the world in Damascus, Syria.

The one wearing no headscarf is Nouriya Al-Subeeh, a Moslem who has been elected to the Kuwaiti Parliament and is Minister of Education.  Her picture was in every newspaper in the Middle East this week, as she refused to wear her headscarf in Parliament, provoking a furious reaction by Islamist parliamentarians, denouncing her for breaking sacred "Sharia" Islamic law.

She smiled and in effect told them to get lost.

You can watch the antics in the Kuwaiti Parliament during her swearing-in.

Pelosi Galore is now a laughingstock all over America for her ridiculous behavior, as you know.  But it's important to understand that she's also a laughingstock, a joke woman, all over the Middle East now as well.

It is Dhimmicrat liberals that are causing America to lose respect in the Middle East, not George Bush.  Thoughtful Moslems think it truly astonishing that so called "feminist" American women don't advocate freedom and equality for Moslem women.

Fortunately, Moslem women are themselves advocating freedom and equality for Moslem women, and are not backing down when confronted by little-zibbed men who try to intimidate them.

It's one good sign to hold on to here in the Middle East where I happen to be on this Good Friday (4/6).  Easter is a time to celebrate the resurrection and renewal of the human spirit.  It is not a time for pessimism.  It is a time for optimism, for renewing our faith that good can indeed triumph over evil.

Please hold on to this optimism during this time of resurrection.  I wish you all a Happy and Joyous Easter.