TRUMP PARKS HIS TANKS ON THE SIERRA CLUB’S LAWN 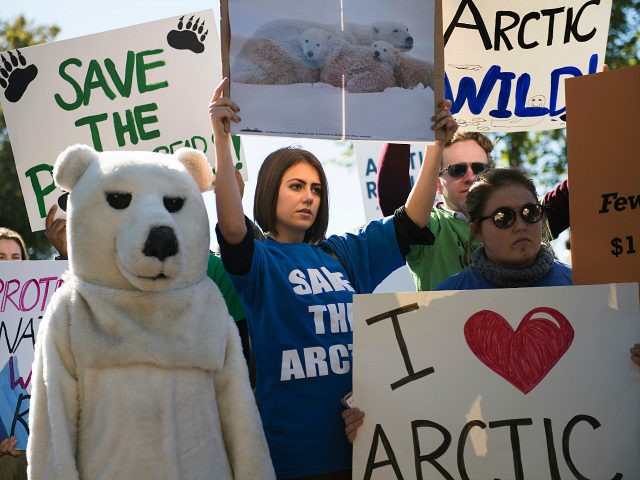 There was a lot of good news in President Donald Trump’s new National Security Strategy (NSS) — the document which finally told the truth about climate change: that green activists pose a bigger threat to U.S. security than anything the climate can manage.

But nothing in the NSS is likely to provoke quite so much fury among environmentalists as one of the clauses buried among another of the Trump administration’s recent reform measures: the bit in the tax-reform package which permits part of the Arctic National Wildlife Refuge to be opened to oil exploration.

Alaska’s Arctic National Wildlife Refuge (ANWR) has long been a Sacred Polar Bear for environmental campaigners. It’s their line in the snow: the ne plus ultra of pristine wilderness, majesty, and loveliness to be preserved at whatever cost. Democrats have been fighting to prevent it being developed for oil since the 1970s.

So Trump’s announcement that soon oil companies will be allowed to explore there is about as a big a provocation as if he’d turned up to the Sierra Club’s summer vegan barbecue, spit-roasted a baby manatee, and served it up with a snail darter reduction and spotted owl sauce.

“House and Senate Republicans late last week unveiled a final tax-reform package that includes a controversial provision allowing a section of ANWR — which has been one of the highest-profile battlegrounds in the energy vs. environment debate since the 1970s — to be opened to oil exploration. ANWR drilling was left out of the House’s original tax legislation but was included in the Senate’s, and now has found its way into the final version of the bill hashed out by the chambers’ conference committee last week.

Green groups are well aware that drilling in ANWR would represent a major blow to their agenda, and they’re pressuring lawmakers publicly and behind the scenes in the hopes of getting a last-minute change to the tax bill. Top environmental organizations also used public-relations moves to galvanize public opinion on their side of the debate.”

The greenies are getting so desperate, they’ve even wheeled out Robert Redford.

“Republican leaders are saying the refuge needs to be auctioned off to the oil industry to help offset a $1.5 trillion tax giveaway,” Redford said in the ad. “They claim that they can raise $100 million plundering these public lands.”

To little avail, it would seem.

The Trump administration has made clear that in the war between energy users and environmental campaigners, there can only be one winner. And today (12/20), with the passage of the tax reform bill, the GOP majority in Congress is with him.

According to the Washington Times:

“In a statement Sunday morning (12/17), the office of House Speaker Paul D. Ryan said opening ANWR to drilling will both generate money for federal coffers and promote American energy independence.

‘The benefits of energy development extend far beyond raising revenue. Energy development creates good-paying jobs. Where? In Alaska, of course, where ANWR is located, but also along the entire energy supply chain,’ his office said. ‘For example, pipes and equipment must be built. Truckers must be hired to drive equipment. That means good jobs for Americans across the country. This also means a major economic boost for our economy.’

Republicans estimate ANWR drilling will create at least $1 billion in revenue over 10 years, though it’s unclear exactly when drilling will begin. Despite the authorization within the tax-reform package, it’s still likely to take years for companies to secure the land and go through necessary approval and permitting processes.

‘If we can successfully pass this legislation, the ultimate result will be more domestic jobs, larger paychecks, and greater energy security — and that is exactly what Alaska and our country need right now,’ she said.

This just happened over the weekend.  Trump needed every single last Pub vote – all 51 (with McCain sick in Arizona) – no waverers, one of whom was Murkowski.  So he asked himself:  “What can I give her that she wants most of all, and is a win for me and the economy?”  And he gave it to her.

What’s more, rather than being intimidated by greenie outrage, for him that was an added incentive – flipping the bird to the greenies was frosting on the cake.

British writer James Delingpole is the author of such “fantastically entertaining” books as 365 Ways to Drive a Liberal Crazy.