TRUMP IS NORMAL – SWAMP THINGS ARE NOT

Why do Swamp Things criticize absolutely everything President Trump says or does, when it exposes them as shallow, dishonest, hypocritical jackasses?

Establishment elitists and NeverTrump fellow travellers got the vapors over what the president said at the NATO conference. Watch above – and smile — as Trump utters the words that triggered them so.

It’s a bad idea for Germany to buy natural gas from Russia because it makes Germany vulnerable to blackmail, and because what Germany will pay for the gas could finance Russian aggression, the president said.  And it’s way past time for the 28 other NATO nations to bear their fair share of the common defense.

By “recklessly” calling out our allies on their broken promises, Trump may destroy our most valuable alliance, said former CIA Director John Brennan and former UN Ambassador Samantha Power.

“With his patented mix of incompetence, personal corruption, malice, and inability to think more than one tweet ahead, (Trump) has managed to convince many of our closest allies that partnership with the U.S. is structurally unreliable,” Power said.

In what alternate universe must one dwell to think prodding NATO allies to spend more on defense, and depriving Russia of billions of euros of hard currency helps Putin?

Since taking the oath of office, President Trump has:

*Told the Poles the United States will sell them all the liquefied natural gas they need so Russia can’t blackmail them by threatening to cut off gas supplies.

*Also told the Poles on that same visit last year those Patriot anti-ballistic missiles Obama wouldn’t sell you for fear of offending the Russians, they’re on their way.

*Annihilated a Russian battalion that attacked a U.S. position in northeast Syria in the biggest confrontation between Russian and American troops since Vladivostok in 1919.

With no facts to support the phony Russia collusion narrative, Democrats and the Lying Swine rely ever more on hyperbole to sustain it – and look ever more ridiculous in the eyes of normal people.

Normals agree with the president that if Europeans aren’t serious about their own defense, then we should rethink our open-ended commitment to their defense.

Our NATO allies agreed to boost spending on defense, Trump said before he left Brussels for London. Would they have done so if the president hadn’t called them out?

NATO may not survive because our bull in china shop prez hurts the feelings of Euroweenies, Swamp Things say.  If the alliance were that fragile, maybe it shouldn’t survive.

NATO has been our longest, and most successful alliance. (Russia hasn’t invaded Western Europe.)

But things change over time. The Soviet Union, against which NATO was formed, no longer exists. The nations of Western Europe no longer are flat on their backs economically, as they were in 1949. They are now more than wealthy enough to pay for their own defense. But – as long as we pay the biggest bills – they choose not to.

With the sterling exception of Britain (and in long gone days, Canada), our allies have been allies mostly in the sense the hippopotamus and the red-billed oxpecker are allies. The relationship has been more like that between host and parasite than an alliance between equals. 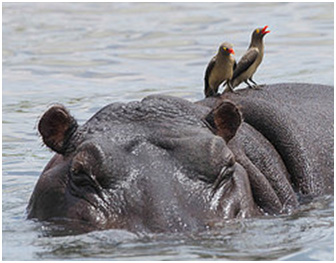 Example of Parasitism: the Red-Billed Oxpecker

During World War II, our allies France, Belgium, Holland, Denmark and Norway graciously permitted us to liberate them from Nazi occupation. Thanks, guys!

Germany and Italy weren’t our allies during WWII. But after the war, West Germany did allow us to protect it from invasion by the Soviet Union. Danke schoen.

All our Western European allies were willing to accept millions of our dollars to rebuild their economies. They’ve repaid us by cheating us on trade deals. Our gratitude knows no bounds.

We have benefited from NATO too, of course. It would have been very bad if the Soviets conquered Western Europe. But we have benefited much less than have our allies, and since the collapse of the Soviet Union, the benefits to us of NATO membership have diminished.

Europe faces still a threat from Russia. But it comes now from natural gas pipelines, not tank armies. 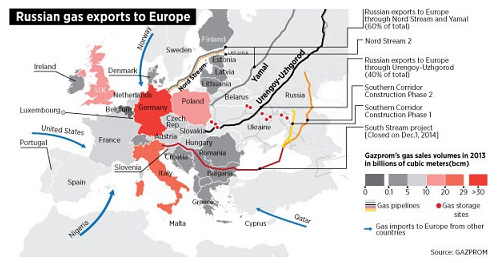 The Nordstream 2 pipeline President Trump complained about is at the top of the map, runs through the Baltic Sea. Here’s a close-up:

Two experts for the Atlantic Council explain here why it’s a really bad deal for Europe.

“Nord Stream 2 not only runs counter to the European Union’s energy security strategy, but also creates new security risks,” they conclude. “Decision makers from Lisbon to Helsinki should make it unambiguously clear that they oppose the building of this pipeline.”

Nordstream 2 is also known as the Molotov-Ribbentrop pipeline, said the London Telegraph, referring to the infamous Hitler-Stalin pact on the eve of WWII.

The “corruption pipeline,” as the Free Russia Foundation calls it, “will primarily benefit Putin’s cronies and not the Russian budget or regular consumers.”

If Nordstream 2 is so bad, why are Swamp Things banging on Trump for criticizing it?

She’s against Nordstream 2 too, said Anne Applebaum, foreign policy columnist for the Washington Post. But Trump opposes it “not because he cares, but because he is malelovent, and he wants to do maximum damage to Merkel, Germany and NATO.”

So Anne’s a mind reader as well as an “expert” on foreign policy. She once had a reputation for sober analysis. But TDS rots minds. And souls.

I doubt the president bears ill will toward Merkel personally, or towards Germany. But given her enthusiasm for Nordstream 2, the dismal state of German armed forces, her reluctance to impose sanctions on Iran, and the very bad deal German auto makers made with China, is Germany really an ally?

The most genuine of our NATO allies these days are former members of the Warsaw Pact, Poland and Hungary especially. President Trump should consider moving U.S. troops from Germany to these countries, where they would be more welcome, would cost us less to maintain, and we’d be paying rent to friends instead of to so diffident an “ally.”

I like Germans (other than Merkel). But as Lord Palmerston said, we have permanent interests, not permanent alliances.