TRUMP EXPANDS HIS BASE WITH RECORD NUMBERS OF TRUMP DEMOCRATS

Media outlets say that early voting hugely favors Biden, but that’s not true. For more information on that Democrat disappointment, you have to look to Australia, where, as the video above shows, Paul Murray of SkyNews put together an excellent segment showing that Biden has a pretty small lead over Trump in early voting.

If you pay attention only to the polls and the mainstream media narrative, you’ll believe that, even though the presidential race is tightening, Biden still maintains a lead and can handily win the upcoming election.

However, if you look at the information on the Twitter feed of Ronna McDaniel, @GOPChairwoman, you’ll see an entirely different story and one that is more in sync with Trump’s well-attended rallies compared to Biden’s anemic afternoon teas. It’s the story of record numbers of Trump Democrats.

Today, Joe Biden shuffled out of his basement for another one of his “rallies.” It was an embarrassment: 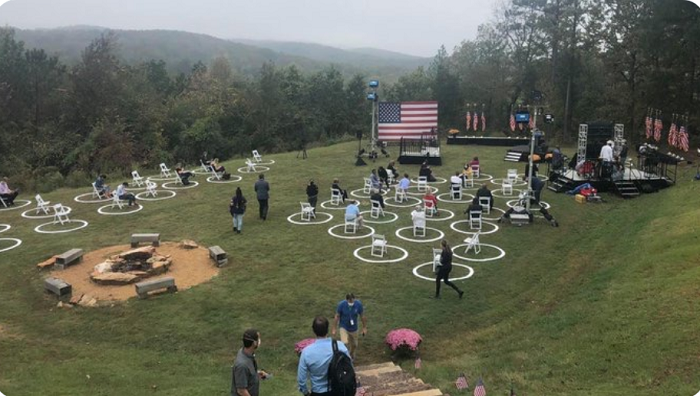 Meanwhile, Donald Trump is doing two to three rallies a day, every day, and looking more vibrant and alive with each passing appearance before tens of thousands of people.

The interesting question, and the one the mainstream media would prefer you don’t ask, is who are the people attending Biden’s rallies? As was the case in 2016, the Trump campaign and the GOP are paying close attention to the people showing up.

Here’s data that McDaniel published from the last several Trump rallies. In tweet after tweet, pay attention to the number of non-Republicans at the rallies and the number of people who did not vote in 2016. The Midwestern numbers are extraordinary.

“OHIO is ready to re-elect @realDonaldTrump!

“Our supporters in NEW HAMPSHIRE are ready to turn the state red for @realDonaldTrump!

“While Joe Biden holds ZERO events today, @realDonaldTrump is firing up supporters all across PENNSYLVANIA! From his first rally:

Thank you to everyone who turned out!!

“Another great turnout for @realDonaldTrump in PENNSYLVANIA:

“President @realDonaldTrump won Michigan in 2016 by bringing new voters into the fold, and today’s crowd shows he is doing it again!

“I thought the partisan breakdown at Michigan’s rally was impressive.
But the % of Democrats and Independents who turned out for @realDonaldTrump in Wisconsin is even higher!

“HUGE enthusiasm for @realDonaldTrump in Omaha!

Thank you to all the supporters in IOWA and NEBRASKA who came out!

Just as we had the famous Reagan Democrats, it looks as if this election is going to see a huge number of Trump Democrats. Those voters aren’t necessarily going to appear in traditional polling. Likewise, to the extent that almost all polling outfits, in the days before the election, focus on people who have a track record of voting, these enthusiastic newbies also aren’t getting counted.

Now add in the number of African Americans who support Trump. Just three days ago, Rasmussen reported that 46% of blacks approve of Trump:

If blacks are indeed switching their allegiance to Trump and away from the Democrat party that’s exploited them for so long, that’s a devastating blow to the Democrats.

Moreover, Trump either has either maintained the solid support he had in 2016 from Hispanics or has strengthened that support (depending upon which polls you’re relying).

What’s apparent is that, despite Trump’s tweets, which purists and snobs deplore (and supporters adore), and despite the insanity of 2020, Trump has expanded his base. Moreover, when you see thousands of people lining up to attend his rallies, no matter the weather, you’ve got to believe that they’re also going to make the effort to vote:

“’Longest line I’ve seen at a @realDonaldTrump rally yet.’

An estimated 65% of Americans are planning to vote this year.  Be sure you are among them!  As Sean Hannity has said, everyone should assume that his or her vote will be the one that makes the difference – and that’s true whether you’re in a blue or a red state.

After all, even though the popular vote is constitutionally irrelevant, the best outcome is one that sees the Democrats realize that they haven’t just lost by a little; they’ve lost by a lot. And yes, I’m assuming a Trump victory. I can’t help this increasing optimism.