2 The Point News » CyberTex » THEY MUST BE STOPPED

THEY MUST BE STOPPED 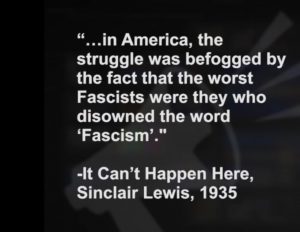 After a brief hiatus from writing, Tex is back!  Believe me I’ve missed my fellow TTPers.  While traveling the world extensively the past several months, attempting to save corporate IT from themselves, I’ve kept my eyes and ears on a very disturbing trend:

In other words, any political ideas to the right of Mao are now heresy, along with thoughts that go against the constantly-morphing, “intersectional”, twisted orthodoxy of snowflake Millennials or 90% of their GenX college professors.

“So, Tex, why should I care about a few commentators not getting to use Twitter anymore?  Heck, I’ve never tweeted in my life and I’m doing great!”

Well, because it doesn’t end there.

Imagine saying the wrong thing per some Antifa sympathizer sitting in a cube at Twitter or Facebook, and upon checking your bank account you realize you didn’t get paid that week.  What then?

Or that because you invested in a web site Microsoft or Amazon didn’t like that was hosted on their cloud platform, without much notice it’s shut down and its contents deleted?

Sound like something Alex Jones would say?  In a sad bit of irony, that’s precisely what happened to him along with many, many others.  If you think such a thing can’t happen to everyday people, just check out China’s new “social credit” system.

“Aww, Tex. That’s over in China. We’re in America, the land of the free! There’s no way that could happen here. We wouldn’t let it, and besides Alex Jones is a weirdo. Can’t believe everything you read, Tex!”

Except that it has already happened to Americans and folks in other supposedly “free” nations like the UK and Canada, perpetrated by American technology companies and their Fascist allies in the media and the courts.

“The father of liberalism John Stuart Mill mused that social tyranny is worse than governmental tyranny.  He was right…I am self employed and rely on the most democratic form of financial support: My viewers, according to their desire and ability. In order to do so, I rely on certain platforms — almost all of which have deplatformed me.”

It sure does. Because it’s Un-personing in a way even Orwell could not have imagined.  But it’sMark Zuckerberg’s dream. 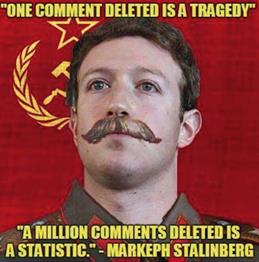 During her election campaign for Mayor of Toronto, Canada, Faith was viciously demonized by the media.  She described the result:

Many of these companies (Patreon, PayPal et al) are now looking at working with banks and credit card companies to prevent payment to and from businesses and individuals they don’t like.  Visa and MasterCard have begun refusing to process payments and donations to conservative groups.

For several more censorship examples, see University of Tennessee Law Professor Glenn Harlan Reynold’s When Digital Platforms Become Censors in the Wall Street Journal.  (One of his solutions is for them to be legally designated as publishers; another is prosecution for engaging in “a conspiracy in restraint of trade.”)

Keep in mind, TTP’ers, that many of these same platforms, along with YouTube and Instagram continue to allow Leftist groups like Southern Poverty Law Center, Antifa and “the Resistance” to post at will, along with CAIR, Hezbollah, etc.

Also, if you identify proudly as a Black, Moslem, Trans, female, lesbian paraplegic, then you can say almost anything, assuming of course you conform to whatever your collectivist masters dictate is appropriate for such a person.

Or maybe just a vocal SJW wacko like this working at Microsoft: 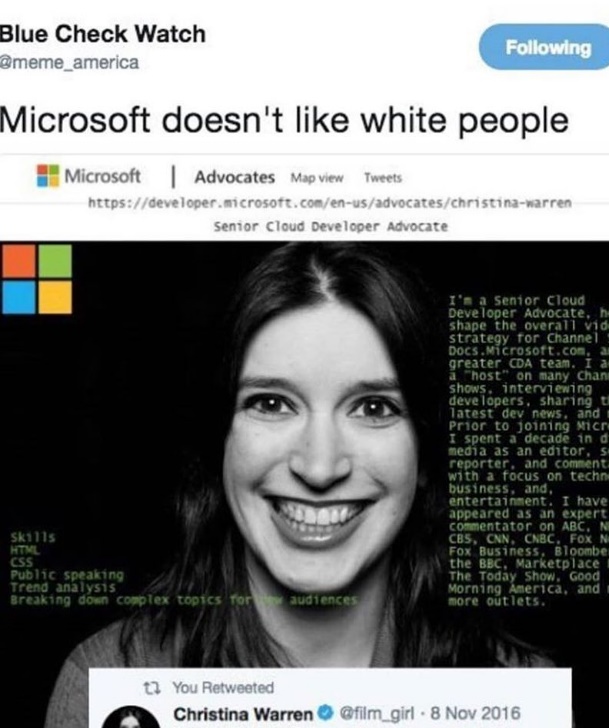 I cropped out what she tweeted at the bottom as TTP is family-friendly, for she applies the f-word to “white people.”  Of course she’s white herself.

Yes, she still works there as a senior developer, despite numerous retweets to the company for comment and making AOC aka Occasional Cortex look sane. Then again, this isn’t surprising given their new CEO partly dedicated the first chapter of his recent book, Hit Refresh, to Karl Marx.

“Well, Tex. What are we to do? Is there any hope from young people?”

Yes.  We do what this Generation Z young man did:

First, sue the pants off of the SJW blue check-marked libtards online and the corporations they work for. 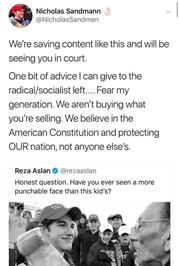 Second, whenever possible, reduce or eliminate your usage of these platforms, as ones committed to freedom of expression become available.  Gab.com and Minds.com are emerging as small but powerful new options, so of course they’re being demonized by the media and tech giants as “alt-right”.

Next, move your email off of platforms like Gmail that are openly scanned for targeted advertising and potential spying for wrongthink.  Tex strongly recommends ProtonMail as an alternative.

In closing, for more detail, I encourage all TTP’ers to watch the following interview: Overcoming Censorship: The Rise of Alt-Tech

This channel, “Computing Forever” also covers many political topics from a young, conservative perspective, along with tech trends.  It’s focus is “Discussing the rise of alternative social networks and new technologies to overcome censorship.”

Until next time, see you all on the TTP Forum!

Tex Manchester is TTP’s world expert on cybersecurity. He travels the world advising Fortune 500 security executives and professionals on how not to be on the news.  However, he is even more passionate about helping everyday people protect themselves in today’s connected world.