THERE’S A NEW SHERIFF IN TOWN 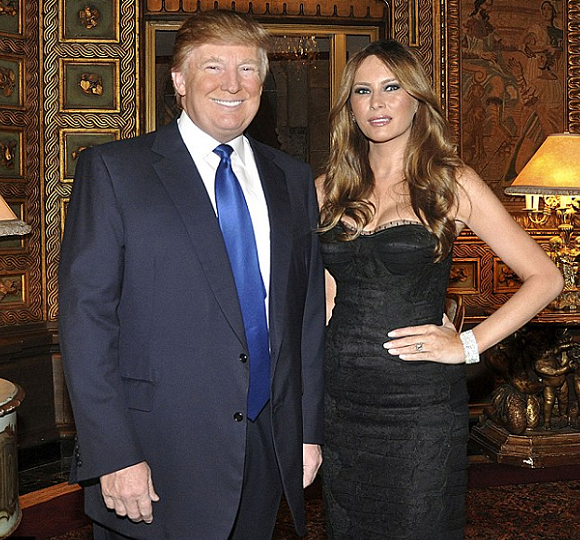 The President and First Lady of the United States

What can you say to this picture, taken at Mar-a-Lago in Palm Beach, except OMG?

A multi-billionaire President and the hottest First Lady in US history.  A billionaire who can’t be bought, can’t be intimidated, who’s flamboyantly proud of being a self-made capitalist, who refuses to apologize for his wealth, who genuinely loves his country and is determined to defend it, who knows just what it takes to create widespread prosperity with plentiful good jobs…

… and a wife that leaves the wife of every other leader on earth in the dust.  A First Lady so stunning that if she were standing next to a Ferrari (and you didn’t know who she was), you wouldn’t notice the car.

As in so many Western movies, the job of the new sheriff is to rid the town of the corrupt old sheriff and his gang of bullies.  In the movies, this is normally done with bullets and fists.

They still have their place.  As Mad Dog Mattis says, “Some folks need killing” – like ISIS terrorists.  It’s why we have a military – why Trump will have a military of warriors instead of Obama’s transgenders.

For the most part, however, Trump will be a game-changer for America and the world on far deeper and foundational levels.  The first level will be economic, the second cultural, the third and deepest psychological.  It is going to be absolutely fascinating to watch how these unfold.

You already know about Carrier and Ford and US Steel.  Let’s now venture north and listen to one of Canada’s most prominent businessmen, Kevin O’Leary.  He is an utter realist, admitting that “We (in Canada) are so screwed.  Trump vs. Trudeau is like Godzilla vs. Bambi.”

That’s a funny quip, but what he says is very serious and worth paying close attention to:

Got that?  The only way for Canada to hope of competing with the US is to get rid of climate change carbon taxes “this afternoon.”  In Trudeau, “we’ve got the wrong guy – we need a Trump guy who knows how to compete.”

Let the impact of that sink in – not just for Canada but for the whole world.

Trump means business, in both meanings of the phrase – meaning not just conducting business in the narrow sense, but no dicking around, no fantasies, no diversionary scams like “climate change” and anti-capitalist fascisms like Dodd-Frank, but real full-bore bottom line capitalist competition.

There’s a reason the Dow is headed towards 20K and the Russell 2000 keeps reaching record-breaking highs.

Instead of Zero filling his Cabinet with bureaucrats and boffins who know nothing about business, Trump is placing amazingly accomplished business people in charge:  Steve Mnuchin at Treasury,  Wilbur Ross at Commerce, Andy Puzder at Labor, Linda McMahon at SBA.

This is an administration that is pro-business, actual business not Zero’s crony business filled with “renewable energy” frauds in exchange for Dem Party donations.

That knows millions of federalie bureaucrats who do nothing productive and churn out job-killing rules by the thousands are just in the way of the economy and need to get real jobs in the real world.

The examples could go on, but the result will be an American economy that is going to grow astonishingly fast – because it will be unleashed.

Watch for a catch phrase to explain it: permissionless innovation.  Let people and companies innovate without having to get permission from some jerkwater bureaucrat, and we’ll all be exclaiming “Whoa Nellie!” like sportscaster Keith Jackson seeing an awesome play on the field.

Then watch this propagate into the world.  In country after country, business folk like Kevin O’Leary will be ordering their governments to “get the bureaucrats out of the way, we have to compete.”  And in many, the governments will comply.

It is starting already in India, for example, where economists such as Naseem Javed argues for Innovation India,  encouraging Prime Minister Modi to embrace “Trumpization” of the economy.  He advises:

“Trumpization… is when political correctness becomes a sign of incompetence and corruption and draining of swamps becomes mandatory. Dare to innovate and create grassroots prosperity.”

Now to the cultural.  Donald and Melania are about to become the most glamorous and idolized couple on earth.  Let that sink in.

The world’s most flamboyantly rich businessman is now the most powerful man in the world with the most successful economy and a military that no one wants to mess with.  Then there’s Melania.  The entire planet is going to beat a path to their door, and no one will care about libtard moonbat enemedia bitterness.

American Glamor is back and on top.  American culture is going to be the hippest coolest thing going anywhere.  And it’s going to be a lot less crude expletive-ridden indecency.

Decency, manners, and graciousness – in a word, grownup adult behavior – will be expected as the norm.  Yes, even Trump – Melania will see that he becomes fully presidential, albeit allowing him the occasional tantrum.

The most interesting and impactful effect Trump will have upon the world is psychological.

That’s because the world’s most fundamental problem is psychological.  There’s a word for it:  Anti-Capitalism.

Let’s face it – most of the world is afflicted with this neurosis – from the Democrat Party to the great majority of governments across the globe.

The recipe for widespread prosperity with good plentiful jobs and a thriving middle class is no secret, and not rocket science to make:  low taxes, low regulation, permissionless innovation, non-corrupt rule of law, basic human freedoms, and a capable police and military for defense.

There are close to 200 countries in the world.  How many have the recipe?  Answer: very few, tragically very few.  Most tragically, America is not among those few.

That is about to change.  Trump may not make the recipe to perfection like Grandma’s apple pie, but he is going to come close enough to make it irresistible for dozens of countries to try the recipe for themselves.

Watch for this as it may turn out to be the greatest show on earth – country after country shrugging off their anti-capitalist neuroses and embracing genuine economic freedom to their enormous benefit.

Imagining how much this would change the whole world for the better is almost like what happens after Kurzweil’s Singularity.

Ray Kurzweil may just be fantasizing, but a world—or at least a large portion of it – that embraces real economic freedom, that admires and appreciates the entrepreneurs and capitalists that made their prosperity possible, a world that is prosperous on orders of magnitude than before, is actually possible.

Possible because of the two people you see in the picture above.  Yes, there’s a new sheriff in town – and the irony is exquisite.

What ever would Ayn Rand have thought if she saw that John Galt turned out to be Donald Trump?  And that his Dagny could possibly look like Melania?

Truth indeed is stranger than fiction – and now, more thrilling.