THE WITCH IN THE WHITE HOUSE 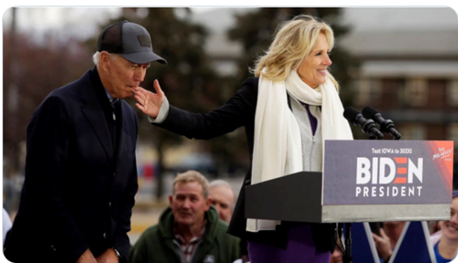 The millions of Americans who were paying attention throughout the 2020 election campaign all became painfully aware of the fact that Joe Biden’s cognitive abilities were slipping and slipping fast.

His wife, as the person closest to him, should have been the one to call the campaign quits in order to reduce stress on the man.

Instead, so anxious to become the First Lady by any means necessary, Mrs. Biden continued to push her failing husband’s campaign forward as if he were mentally qualified.  All those around him knew as well he was in the throes of dementia back in July 2020 at the latest; it was impossible to miss the signs. 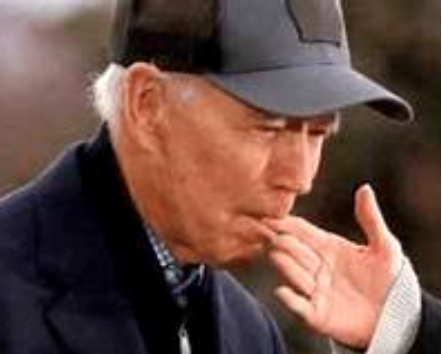 They too ignored the obvious, and because they always believe that the American people are, as a collective, an order of fries short of a Happy Meal, they thought we wouldn’t notice.  Not only was his progressive neurological dimming clear, but so was the fact that at no time throughout the campaign could he draw a crowd.

We all saw that he could not give even a short talk without a giant teleprompter.  The man was toast then.  Now he is burnt toast.  He no longer credibly reads even that jumbo teleprompter.

Each attempt to speak since Inauguration Day has been an embarrassing disaster.  And there is the Not-Dr. Jill (she has neither a MD nor Ph.D.) to step in to complete his sentences when she should be making the announcement that we all know is coming – for the Democrats to implement that 25th Amendment they had hoped to use to get rid of President Trump.

The woman is egregiously guilty of elder abuse for allowing poor Joe to suffer the indignities of encroaching dementia in public.

Given the tragic crisis on the border once again, it’s a safe bet that many Democrats are secretly missing the best president since Reagan.  Trump had the border under control.  That was one reason the unemployment for all minorities got to its lowest levels ever!

But Joe stopped the border wall construction on Day Two, after ending tens of thousands of great jobs on the Keystone Pipeline on Day One. Now, after just eight weeks in office, Biden has been a one-man wrecking ball to American jobs, energy independence, and border security.

Under Trump, the Border Patrol and ICE were allowed to do their job, which, like all law enforcement, was and is to protect this nation and its legal citizens.  And we are to believe that Americans chose Biden to undo the tremendous successes of the Trump administration?  No chance.

Every poll, even those rigged by leftists, shows that Americans do not support the violence perpetrated by Antifa and BLM.  They do not support defunding the police in any state or city.  Sure, those anti-White racists do support those groups and policies, but they are a minority.  Ask any Black mother trying to keep her sons alive beyond the age of fifteen in Chicago or Baltimore.

As for the We-Love-COVID crowd, those who have embraced the absurd fear of a bio-weaponized flu that 98% of those who get it recover from, those self-appointed mask police who keep moving the goal lines since the “curve” was flattened a year ago, they too deserve contempt.

Once the flu is gone, they are bound to try to re-impose all the restrictions on our essential freedoms they so loved and for the equally absurd and phony issue of climate change.  Ask the Texans how all that global warming is working out for them.

And then there is the border.  Whoever is calling the shots for all the Biden executive orders is having a grand old time at our expense.  These people are destroying the America we once knew faster than anyone could have thought possible.

Obama gave them a good start, but they are surely capitalizing on their joy of uninhibited freedom with the White House, and their bare majorities in the House and Senate, in order to lurch these United States into Venezuela-style totalitarianism.  Like the ruling elites of that South American nation, they are certain that all their destructive mandates inflicted on “the people” will never alter their or their children’s lives.  And they probably won’t.

Almost all of those among the Democrat elites with power are multi-millionaires if not billionaires already.  They have no fear of their lives being impacted by their oligarchical rule over the rest of us.  They do not even fear the COVID that is streaming over the border into the U.S. by the thousands, too many to be tested.  Californians Pelosi, Newsom, and Feinstein have all been photographed indoors in public without masks.

And what of the ridiculous transformation of our Capitol? DC now resembles the Green Zone the Americans built in Iraq to keep out terrorists.  Nancy Pelosi feels no qualms about abusing all those patriotic National Guard troops who are being fed  inedible food and are being asked to stand around and freeze as props for her farcical fear of “right-wing extremists” like QAnon, a shadowy online “group” of two or three people that no conservative ever took seriously.

So invested in that inane conspiracy theory, she and her fellow fearmongers have made even bigger fools of themselves.  They are, as some clever person coined them, members of the “Blue-anon” conspiracy, a term already banned from Google.  Ha!  It’s everywhere else.

But in the end, no person is more reprehensible than Jill Biden.  From the moment Joe decided to throw his hat in the ring, she should have put a stop to it.  She of all people knows that the bulk of her family’s wealth is ill gotten, via massive corruption and selling out to China, Ukraine, and MNBA.  She knows exactly how depraved Hunter Biden is; she knows all about his many perversions, how many girls and women he has used and abused, some of them within her family.

While much of it has come to light, soon it will all become common knowledge.  Still, she thought Joe should be pushed into the campaign, certain that our wholly corrupt media would cover for both Joe and Hunter — and indeed, they did and continue to.  But that won’t last.

At this moment in time, Jill should be a bit nervous at how quickly so many Democrats are turning against the execrable Andrew Cuomo, the Demon Barber of Fleet Street, for good reasons.

All those who spent a year singing his praises were utter fools because who and what Cuomo is has been obvious for simply ages, just as who and what Joe Biden is has been evident for over forty years.  Neither of them was never an honest, intelligent nor a good man, never.

And now, thanks to Jill’s Meghan Markle–like wannabe-ism, America is being ruined, executive order by executive order, and a horde of Democrats in Congress who have no spine or a shred of real love of the country that gave them the privileges they now enjoy are too scared of Pelosi and Schumer to object.

If there are traits that characterize powerful Democrats, it is gross ingratitude coupled with arrogance.  There is no more serious character flaw than ingratitude.  Coupled with a lust for power over others, it is ruinous.  Those who are responsible for making Biden the 2020 candidate and for rigging the election in the numerous ways they did should have stopped and thought a bit about the consequences of their plans.  They should have said no.