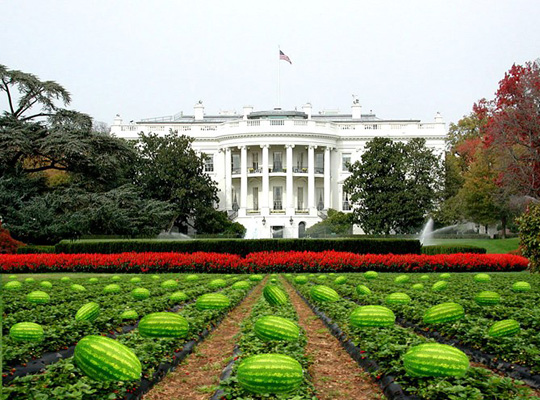 Mayor Dean Grose of Los Alamitos, a small community in Orange County, California, resigned Monday (3/02) for emailing this cartoon to some friends, with the caption, "No Easter egg hunt this year."

He resigned because the media screamed the tired old bogeyman of "Racism! Racism!" and he was so stupid he fell for the ridiculous accusation.  Ridiculous on two counts.

Except, of course, if they are one of those blacks wallowing in victimhood and carrying around a racial chip on their shoulder the size of a giant sequoia.  Like Keyanus Price, a black lady who got the email and demanded a public apology from the mayor.

Mayor Grose promptly begged for forgiveness like a good little white boy, saying he hadn’t a clue about watermelons and racism.  He probably didn’t.

Second, because the cartoon above is completely accurate.  We do have a Watermelon White House in Washington now.  But this hasn’t anything to do with silly antiquated racial stereotypes.  It has to do with what a watermelon is today in terms of political and social activism.

A favorite insult of leftwing and race-hustler blacks is to call anyone to the right of them an "Oreo," after the cookie which is "black on the outside, white on the inside."  When Michael Steele, the new Republican National Committee chairman, was Lt. Governor of Maryland and ran for the US Senate in 2006, he was pelted with Oreo cookies at campaign appearances by Democrat hate-mongers.

To call a conservative black an Oreo is a racist insult.  To call liberals with a certain set of passions a "watermelon" is a description – and one meant to provide a new thought-provoking perspective.

For watermelons are:  green on the outside, red on the inside.

The goal of conservatives is freedom.  The goal of liberals is power.  Marxism was only a convenient rationale for them to seize power when Marx’s philosophy was in vogue.  After its failure, they went in search for another rationale – and they decided on environmentalism.

But they couldn’t gain enough traction with such things as DDT and thinning bird eggshells.  Nor with such fascist property-rights destroyers as the Endangered Species Act.  Then they hit the jackpot with "global warming" and "climate change."

This was the perfect rationale.  It demonized human beings and gave post-Christians something to feel sinful about.  It gave them a powerful rationale, even more powerful than Marxism, to seize control over people’s lives.  It specifically enabled them to demand control of the very stuff of life and energy itself, carbon – which in a true Orwellian act they claimed was an evil pollutant.

Thus the phrase, Green is the new Red.

And thus the Watermelon White House.  President Zero has surrounded himself with watermelons.

His science advisor, John Holdren is an eco-fascist lunatic who advocates compulsory abortion for population control and thinks Americans should be impoverished for their own good.

His EPA Administrator Lisa Jackson is going to regulate – meaning restrict – CO2 emissions from energy plants (such as coal-fired) as a pollutant.

His energy/global warming advisor, Carole Browner, is a straightforward socialist and member of the Socialist International.  She was Bill Clinton’s EPA Administrator and is acolyte of Algore.

His Secretary of Energy, Stephen Chu, says "Coal is my worst nightmare," and is dedicated to waging war against the source of over 50% of America’s electricity.  He predicts global warming apocalypses such as there being no agriculture in California.

And of course, the biggest watermelon in the White House of all is President Zero himself.  Worshipped as "the Green Messiah" by the eco-fascists, he has, as Morningstar observes, declared war on US energy.

That, coupled with all the crushing anti-incentives and taxes in his budget, means that he has declared war on the US economy, on American prosperity, in effect on American itself.

He is the ultimate liberal.  To merely call him a Marxist, a Fascist, a Socialist, a Communist misses the point – for all of these philosophies are mere rationales for achieving the liberal goal of anti-freedom, of controlling people’s lives, of achieving political power for its own sake.