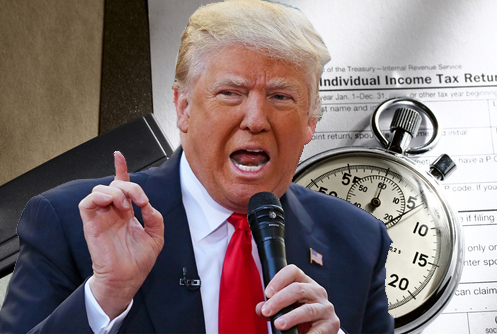 When Donald Trump sits down with Speaker Paul Ryan and Majority Leader Mitch McConnell today (5/12), there is a pressing issue that they should put before their party’s presumptive presidential nominee.

He told the Associated Press on Tuesday (5/10) that he has no plans to release his tax returns before the November election. “There’s nothing to learn from them,” he said. Previously, he had claimed he would love to release the returns as soon as an IRS audit is completed.

This is Trump’s bait-and switch-style at its most dangerous. Some Trump delegates and their alternates should write him an open letter demanding his unredacted tax returns. If he declines, they should declare they will abstain on the first ballot of the convention, driving him below the number needed to nominate.

The delegates should not give Republicans a time bomb that could help take down GOP control of the House or the Senate, or both.

A friend of Donald Trump’s recently approached him to suggest that he will eventually have to release his tax returns, as every presidential nominee has for decades. The friend told Trump that he should do it before the GOP convention to ensure everyone can process what’s in the returns and help make any revelations “old news” by November.

If Trump didn’t do that, he was warned, the odds of politicized leaks from his returns were high, citing several examples from the Obama era, including the illegal leaking of some of Romney’s tax information by the IRS in 2012.

“What will you do if the returns come out as part of an October surprise?” Trump was asked. Trump pondered the question and replied, “I’ll say they aren’t mine.” That stunning answer is the essence of Donald Trump. “It’s exactly what I’d expect him to say,” Fox Business’s Charlie Gasparino, who has known Trump for decades, told me.

But while Donald Trump has made a life out of bluffing his way past problems and cavalier comments, it’s harder to succeed doing that at the presidential level. Trump may be inching up in polls now, but one sharp wrong turn could send him spinning off the road.

A political party that nominates Trump without seeing his tax returns could be committing political suicide and endangering dozens of down-ballot GOP candidates. Even Superman met his match with kryptonite.

This month, Trump told the Washington Post that he will have “standard vetting questions” for his potential vice-presidential running mates. Although Trump declined to specify whether he will require tax returns from the people on his list, a close Trump friend told me it would be “negligence” for him not to do so.

But at the same time, Trump is telling GOP delegates they can’t see his tax returns. That’s a Trump double standard with a somersault.

Donald Trump’s official response is that he would love to release his “very beautiful” returns, but not so much so that he can release even those that predate the ongoing IRS audit he is undergoing.

When Chuck Todd of Meet the Press asked him a follow-up question about this, Trump claimed he couldn’t release any returns because there is “a link” between old returns and the ones currently under audit. “I would love to give the tax returns. But I can’t do it until I’m finished with the audit.”

That is preposterous. Trump’s tax lawyers released a letter in April saying that his audits from 2002 to 2008 ended without their client’s paying any net assessment or payment. “If that’s the case, certainly one would say, why wouldn’t you release those returns?” asked Mark Everson, who served as George W. Bush’s IRS commissioner from 2003 to 2007.

Everson noted that Trump “ran and secured votes over a period of months, saying that he would release the returns.” His conclusion: “If there’s no net assessment, presumably there’s somewhat limited risk to Mr. Trump, and those reasons for not making disclosure [for those earlier years] are political rather than exposure to risk from a tax perspective.”

What could be the political reasons for Trump to avoid transparency and invite constant attacks over his secrecy?

The answer could lie in Trump’s 40-year business career, during which he has assembled an empire of great complexity along with a record of serial credibility problems. In other words, he often “makes stuff up.”

This is a man who said under oath, in a 2008 deposition in an ultimately failed $5 billion libel suit Trump launched against Timothy O’Brien, a reporter for the New York Times at the time: “My net worth fluctuates, and it goes up and down with the markets and with attitudes and with feelings, even my own feelings.”

Trump also claimed that land in Westchester County, N.Y., had doubled in value over the course of a year. “Do you have any basis for that view other than your own opinion?” he was asked. His response: “I don’t believe so, no.”

As my colleague Jim Geraghty has noted: “Trump’s wealth’s a key part of his public image, his status in the eyes of his fans, and his self-image.” O’Brien believes Trump doesn’t want to release his returns because they would show a far smaller income than he has claimed.

The heart of Trump’s lawsuit against O’Brien was this statement from O’Brien’s book TrumpNation: The Art of Being The Donald (2005):

“Three people with direct knowledge of Donald’s finances, people who had worked closely with him for years, told me that they thought his net worth was somewhere between $150 million and $250 million. By anyone’s standards this still qualified Donald as comfortably wealthy, but none of these people thought he was remotely close to being a billionaire.”

Trump claimed the disparagement of his net worth damaged his reputation. He spent millions on the libel case, which dragged on for years because, O’Brien said, “he wouldn’t turn over the tax returns, then the tax returns came in almost so completely redacted as to be useless.”

A New Jersey superior-court judge concluded that Trump was an untrustworthy source of financial data on himself. That decision was upheld by a three-judge appeals court, which noted that the “materials that Trump claims to have provided to O’Brien were incomplete and unaudited.”

The court then went on to quote a Fortune magazine article detailing numerous examples of Trump’s exaggerating about his wealth.

Those fibs have continued to the present day. Trump often cites that he filed a financial-disclosure report with the Federal Election Commission last fall. “My financials show I’m worth more than $10 billion by any stretch of the imagination. Has tremendous cash. Tremendous cash flow,” he told NBC’s Meet the Press last Sunday (5/08).

But those financial-disclosure forms Trump points reporters to are not audited for accuracy or completeness. The election lawyers who submitted them did not pore over Trump’s tax returns before submitting them.  So it’s no surprise that, for example, Trump listed a New York golf club he owned as being worth $50 million.

But in a lawsuit over the property, he told a judge the very same club was worth only $1.4 million.

There are probably other revelations in the Trump tax returns. “I would guess that Trump did not start cleaning up how he reported his income” before deciding to run, David Herzig, a tax law professor at Valparaiso University, told the Wall Street Journal in February. “His past returns are probably a treasure trove.”

That could mean a bonanza for Democrats in the fall.

Tax lawyers tell me that it is “extremely rare” to have been audited for twelve straight years, as Trump claims he was, and that such a position is probably explained by his being very aggressive in his tax stance.

Writing in Forbes this month, Robert Wood, a tax lawyer in San Francisco, said that Trump could take a building that is appreciating in real dollar value and “write-off a piece of its value every year as if it were going down in value” (his emphasis). Trump once boasted at a dinner party that, like Warren Buffett, he paid an effective tax rate that was less than what his secretary paid — perfectly legal, but not something that might be explained away after hundreds of 30-second attack ads.

Then there is charity. “It is possible that his tax returns will reveal that he is not generous generally, or not generous specifically with respect to causes — like veterans — that Mr. Trump suggests he supports,” Wood wrote.

Trump might also have problems with overseas tax shelters. He has already admitted that much of his clothing line was made overseas and that he exploited a loophole in immigration law to bring in foreign workers for his Mar-a-Largo club in Florida.

No political party has ever had quite such a political land mine on the verge of becoming its presidential nominee. If delegates are anxious about pressuring Trump, they should note that no delegate faces serious consequences for abstaining on the first ballot.

A few states make breaking the first-ballot pledge rule a misdemeanor, but no one is ever prosecuted. In theory, state leaders could exact political retribution, but such discipline is extremely rare.

The best estimates are that Trump will finish the primaries in June with fewer than 100 delegates above the minimum number of 1,237 needed to nominate a candidate. But 40 percent of Trump delegates won’t be personal supporters of the Manhattan mogul (ditto with the alternates elected to accompany the delegates and vote in their place if they can’t).

As Jennifer Rubin noted in the Washington Post yesterday:

“Remember, as one delegate expert put it, ‘The only way delegates will be bound is if, when they vote on the rules of the convention, they vote to bind themselves. Otherwise, they’re not.’ Put differently, delegates control their destiny.

Curly Haugland, the delegate guru, has a million maneuvers and potential rule changes up his sleeve for challenging Trump. Now he has a simple, effective one: Pass a rule that says the nominee, who promised to release his taxes, must do so in order to have his name put in for nomination.

Such a rule could easily pass when you consider there are nearly 900 delegates pledged to other candidates and a great number of Trump delegates are reluctantly so. It is entirely possible to come up with a majority of delegates to insist on adoption of the rule.”

If even a portion of the delegates apply pressure on Trump to deliver on his year-old promise to release his tax returns, he might have to cry uncle. If delegates neglect this due diligence, and Trump’s returns become an explosive issue in the fall campaign, they could bear a large chunk of the blame.

Hillary Clinton is already calling on Trump to release his returns. She responded to calls for her to release transcripts of her private paid speeches this way, in an interview with Andrea Mitchell:

“Let’s deal with the standard that’s been in place for decades before we move on to the new standards imposed on me and nobody else. So let’s get tax returns out. Let’s get Donald Trump’s tax returns out and the transcripts of his speeches. Because I am told he made a whole lot more money than I have.”

The political rules binding delegates to a first-ballot vote at the GOP convention respect the voice of the people. But that doesn’t mean the rules should become part of a potential suicide mission in which an unaccountable and non-transparent nominee is selected.

Bob Beauprez, a former congressman and 2014 GOP nominee for governor of Colorado, told me: “We need answers and accountability. I think the idea of abstaining till we get them is a very good one.”