THE STRANGE DEATH OF THE DEMOCRATS 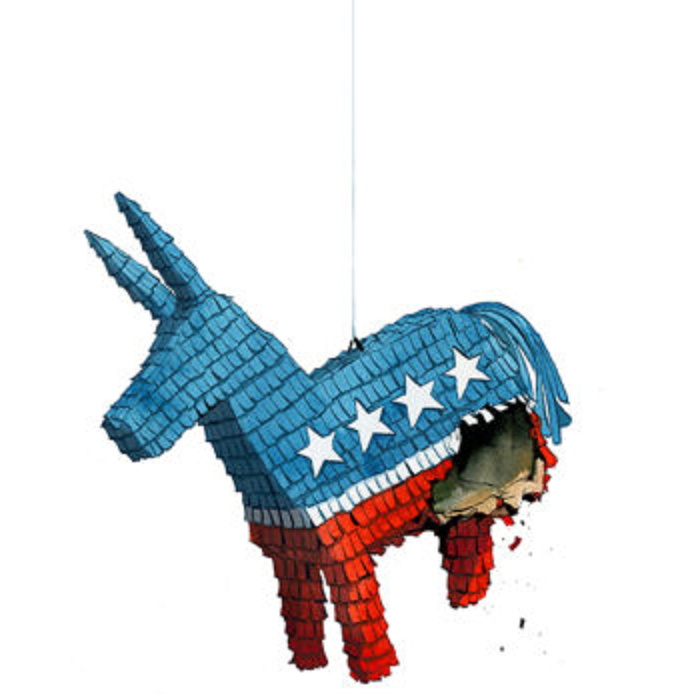 The Democrat party is dying. That may be hard to believe since Democrats control both houses of Congress and won the last presidential election with millions of fraudulent votes.

But the exiguous margins of their hold on the House and Senate, with fewer than 51 percent of the seats in either chamber, tell another story, as does the desperation of their struggle to abolish the filibuster and Voter ID election laws.

Those policy aims are of a piece with dreams of packing the Supreme Court — and packing the Senate too, by admitting tiny Democrat bastions as new states. The left wing of the party even assails the constitutional principle behind the Senate itself, the idea of equal representation of the states.

Simply put, Democrats know they can no longer win by the old agreed-upon rules, constitutional or otherwise.

As recently as the Obama years, they were content with a system of 50 states represented by two senators each — because the party still had a wide enough base of support to win the Senate with an outright majority. They had taken control after 2006, amid the wreckage of George W. Bush’s forever wars, and kept it until 2013. Barack Obama’s coattails in 2008 were strong enough for him take off with 57 Democrats in the Senate and a majority of nearly 80 seats in the House.

Joe Biden had no coattails in 2020. The 81 million who supposedly voted for him — or against Donald Trump — didn’t give Democrats a majority in the Senate, and Republicans actually made gains in the House. (Pretty convincing proof of industrial vote fraud, yes?)

Do Puerto Rico or Washington DC have a better case for statehood today than they had in 2009? What changed? Nothing about PR or DC, but everything for the Democrats.

The party is dying because it has a demographic problem. Long after the culturally revolutionary New Left had carved its way into what was once a working-class party, bringing not only acid, amnesty and abortion but yuppie economics and new strains of identity politics, voters in what are now red states could still feel a connection to the party of FDR or JFK.

Bill Clinton looked a little Kennedyesque, didn’t he? And Joe Biden is some sort of Irish Catholic, right? How bad could they be? Very bad indeed, to judge by the long-term cultural and economic effects of the Clinton years, and the early moves of the Biden administration. Clinton signed NAFTA into law and exported American jobs while importing low-skilled labor, the illegal variety included.

Bernie Sanders, the runner-up, would have exposed how economically hard-left the party could be. And the party’s own Black voters preferred Biden to Kamala Harris or Cory Booker. The party’s leadership problem isn’t about race: it’s that the Kennedyesque image and ideology have had their last dance.

Yet demographics were supposed to save the Democrat party: a less White America, eventually a majority-minority America, would be a more Democrat America, maybe even a one-party America. This myth still drives the mostly White liberals who lead the Democrat party and the panoply of elite institutions — the mainstream media, the academy, corporate America — that keep the failing patient on his feet.

This is why race-baiting has become not only the most important stratagem but practically the only one that Democrats and their allies resort to in their public messaging.

They try to terrify Asian Americans with insinuations that White Americans are targeting them with violence, when the reality is that Whites, Asian, Hispanics, Blacks and everyone else is most at risk from the lawlessness that Democrats have tolerated (and more than tolerated) in the cities under their control.

As they make abundantly clear with every riot, the rising left wing of the Democrat party simply considers law enforcement the enemy. When their publicists write that they really and literally mean ‘Defund the Police’, Americans of all races must believe them.

Despite the police shootings, the riots and the media’s constant racial hype, the 2020 presidential election was less racially polarized than any since at least to 2004.

Donald Trump, a man who Democrats and their allies perceive as the embodiment of White diabolism, actually won a greater percentage of Hispanics and Blacks than liberal-sensitive Republicans such as John McCain and Mitt Romney. And Trump achieved that amid a record-high turnout.

For well over two decades, Republicans listened as the top pundits and political consultants told them that the only way to win more minority votes was to sound exactly like the Democrats. Maybe talk about religion and inner-city Empowerment Zones a little, but whatever you do, don’t mention immigration or crime.

Donald Trump defied that conventional wisdom and he made gains by doing so. Now Republicans may for the first time try a right-wing message to minorities, even as Democrats are devoured by the left.

Republicans have a long way to go before making any progress in the cities, of course, even as the cities bleed. Political machines aren’t dismantled easily.

But if the GOP can make little headway in Democrat cities, the Democrats face the more serious problem of losing ground in the states. Hence the sudden panic about political arrangements they were content with until the day before yesterday.

Joe Biden is alive (for now), but his party is dead. And the newborn radical Democrats can’t win — not without rewriting the rules to get around competition at the state level, where elections are closer to the people.

Daniel McCarthy is director of the Robert Novak Journalism Fellowship Program at The Fund for American Studies.