On Sunday, June 3, Secretary of State Mike Pompeo issued a press statement regarding the 29th anniversary of the Tiananmen Square Massacre by the Chinese Communist Government on June 4, 1989.   In part it read:

“We join others in the international community in urging the Chinese government to make a full public accounting of those killed, detained or missing; to release those who have been jailed for striving to keep the memory of Tiananmen Square alive; and to end the continued harassment of demonstration participants and their families.”

While this was seriously displeasing to China’s rulers, they are in fact more worried about what is happening in their country right now.

Since January 2018, as part of a movement China-watchers are calling the largest student demonstration since June 1989, thousands of college students across China have been organizing both online and offline to demand that their universities take action against professors accused of sexually assaulting students (Radio Free Asia).

Participants have made creative use of novel mobilization strategies, including blockchain technologies, and are hopeful that their adaptive, decentralized strategies will allow this latest wave of feminist activism to remain resilient in spite of government efforts to suppress it (China Change).

It is no coincidence that a new generation of well-educated, politically active, and technologically savvy female activists are emerging as the PRC’s (Peoples Republic of China) demographics enter a period of rapid, destabilizing transition (Xinhua).

As the CCP (Chinese Communist Party) scrambles to respond to this crisis by enacting policies that pressure China’s women to bear additional children and care for aging family members, while it simultaneously denies them the tools to demand equality, it is more rather than less likely that women’s rights will become a major determining factor in China’s future political stability (Sohu).

The Politicization and Mobilization of Chinese Women: #MeToo and Beyond

Underlying the recent increase in feminist activism in China is the CCP’s failure to address the appalling treatment of women in contemporary PRC society.

In a survey conducted by the United Nations Development Program, over 50% of Chinese men admitted to having committed violence against a woman (UNDP). Gender-based discrimination in the workplace is both explicit and rampant, with untold economic implications for women (Human Rights Watch).

Preference for male offspring has been so strong over the past thirty years of the brutally enforced one-child policy that, according to the National Bureau of Statistics, the PRC has 33 million more men than women (Xinhua).  Many think this figure is grossly understated.

Women are pressured to marry early, bear children, and maintain “harmonious” homes, and are often prevented from or punished for seeking to escape bad marriages (Global Times).

Through it all, the overwhelmingly male hierarchy of the CCP has neither raised women to positions of leadership, nor provided any assurances that systemic change at the top may be possible—well-worn government platitudes about women “holding up half the sky” aside.

These trends have come to a head at a time when young women in China are more well-educated and organized than ever before. For the first time in Chinese history, there are more female than male graduates with an undergraduate or postgraduate degree (Ministry of Education).   In spite of widespread discrimination, women in China are earning more and delaying marriage longer than ever before (New York Times).

Further, as in many other countries, grassroots and established civil society groups in China are overwhelmingly staffed by women, with women’s rights organizations in particular experiencing success in raising public awareness of gender equality.

Ironically, since the founding of the PRC, government-affiliated organizations like the Women’s Federation (中华全国妇女联合会) have played a significant role in raising the profile of Chinese women’s issues, for all that their vision of modern femininity is deeply conservative and serves an explicit CCP agenda.

In short, women in contemporary China—especially the younger generation—are more aware of the injustices they face and command the resources necessary to take action against it than ever before.

In attempting to address the situation, authorities have a made a number of high-profile blunders that have incited advocates at home and abroad.

Most notably, this includes the 2015 arrest of a number of feminist activists on the eve of International Women’s Day for planning a public event to distribute flyers on sexual harassment.

The “Feminist Five,” as the detained activists came to be called, were released after 37 days of international outcry, much of which focused on the bitter irony that their imprisonment came as China served as joint host for a U.N. conference on advancing gender equality (VOA).

Rather than discourage feminist activism, however, the Feminist Five incident has only added fuel to what is clearly a growing movement. In January 2018, after a woman inspired by the global “#MeToo” movement publicly accused her former Ph.D. adviser of unwelcome sexual advances, over 9,000 people participated in a letter-writing campaign urging PRC universities to develop procedures to investigate sexual harassment allegations (China Change).

Online activists managed to stay one step ahead of censors and government reprisal by working through a decentralized and flexible network that encouraged local innovation.

To evade keyword-based censorship and keep posts with the relevant Weibo hashtag online as long as possible, organizers introduce artful homophones for “MeToo” such as “rice bunny” (the characters for which—米兔—are pronounced “mitu”, very similar to the pronunciation of the English phrase). 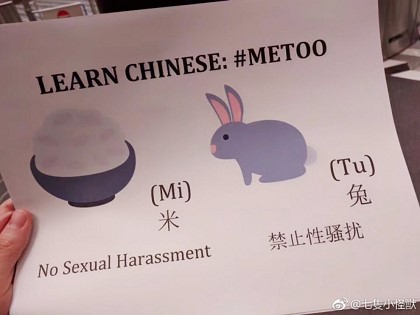 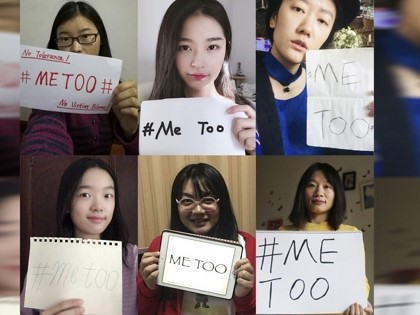 Activists also made innovative use of blockchain technologies to prevent posts from being deleted at all, in at least once case attaching an open letter from an activist in the ledger of an ethereum transaction (China Digital Times).

As of this writing, China’s “mitu” movement is still making headway despite ongoing attempts by authorities to intimidate its proponents and silence feminist advocacy.

This contrasts sharply and tellingly with the treatment of LGBT-related content on the same platform a scant few weeks later. Though Weibo announced it would be censoring such content, within days, they reversed the decision following widespread outcry on social media and a surprising op-ed in the People’s Daily that called for greater tolerance of LGBT people (People’s Daily, April 15).

The authorities’ actions have thus only served to galvanize Chinese feminists—and not just those based in China. Around the world, Chinese feminist activists have participated in demonstrations to protest the closing of Feminist Voices and voice their support for the women’s rights movement (Twitter).

This development underscores the way that feminist activists in China have been able to build a truly international and popular movement. This fact has not been lost on authorities, whose ongoing efforts to muzzle the movement reveal the extent of what they believe is at stake: the political mobilization of China’s women in ways that generate social instability.

The Intersection of Women’s Rights and National Security

The CCP’s ongoing efforts to silence, discredit, and disarm the newest generation of feminist activists is of course part of its larger project to prevent any form of grassroots mobilization.

But this is only part of the story when it comes to the issue of women’s rights specifically. Indeed, as been argued powerfully elsewhere, the Chinese government views the prospect of female empowerment as a direct threat to Chinese political stability (Washington Post).

For years, political scientists and demographers have contended that countries like China, whose gender ratios have been skewed by a deeply ingrained preference for male offspring, are far more likely to develop authoritarian political systems.

They argue that governments with far-reaching powers to coerce and control citizens can respond more effectively to the threats posed by a population with a large percentage of unmarried and restive men—who are referred to in Mandarin as “bare branches” (光棍儿).

To ensure the allegiance of these large male populations, such states are also more likely to adopt aggressive foreign policy positions and adopt nationalistic and militaristic rhetoric. It is important to keep these considerations in mind when assessing Chinese foreign policy pronouncements, and to bear in mind their target audience.

The CCP is aware of the gender imbalance, and has already taken steps to address the issue, namely, revising the disastrous “one-child policy” to permit all married couples to have two children.

Lower total fertility rates also mean that China’s population is rapidly aging, in a society with few support structures in place to ensure the livelihood of elderly citizens.

It is possible that the Chinese government believed the two-child policy would solve both problems at a stroke, by disadvantaging women economically vis-a-vis men, and thereby encouraging them to take on a multigenerational caretaker roles within their families (The Guardian).

In emphasizing female agency and empowerment, feminist advocates have directly challenged this vision. In their writings and their activism, in addition to targeting the many perpetrators of sexual violence within higher education and government, they have pointed out the inherently sexist nature of much of the government’s discourse about women (NetEase).

They have also pointed out that the two-child policy has only made it easier for employers to discriminate against women on the basis that they may be liable for covering additional maternity benefits (China Digital Times).

The popularity of their efforts suggests they have a large audience, particularly among younger women. It also suggests their audience has internalized the concept of gender equality, and are unlikely to retreat quietly into the roles of wives and mothers that the state has imagined for them (Global Times).

Fundamentally destabilizing forces in Chinese demographics and social relations are emerging just as a remarkably well-educated and empowered generation of Chinese women begins to assert its basic rights.

The Chinese government’s response to recent developments suggests that it believes the intersection of these forces is one with serious and important repercussions for Chinese political and economic stability.

The peculiar case of the “rice bunny” movement demonstrates that these concerns are well-founded, and that the future of China’s civil unrest is likely to be increasingly female.

Siodhbhra Parkin is currently a Fellow at PILnet: The Global Network for Public Interest Law. A former Fellow at the Yale Law School Paul Tsai China Center, she is a graduate of the Renmin University of China Law School in Beijing.