THE POPE IN CHINA

If you take a look at a map of China:

You’ll notice an amazing geographical feature near the border with Burma – three of the worlds’ great rivers, the Salween, the Mekong, and the Yangtze, all spilling off the Tibetan Plateau and flowing south in three parallel grooves. The Salween and the Mekong continue south, while the Yangtze finally makes a turn east all the way to Shanghai. The place where they flow south in parallel together is known as The Great River Trenches of Asia. Here’s a closer look:

This is the northwestern tip of Yunnan Province. If you drive from Dali to Baoshan, then take a four-wheel drive track up the stunningly beautiful Salween: 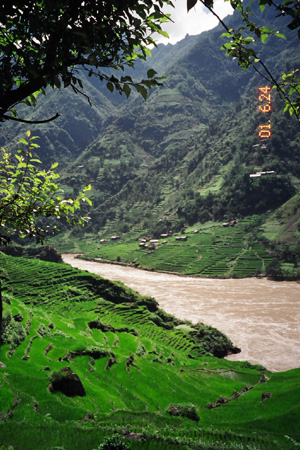 all the way to within a few miles of Tibet, then hike about three hours up into the mountains towards the Mekong, you’ll come to the village of Baihanluo. In this incredibly remote place, you’ll come upon this:

A Christian church. A Catholic Church to be specific, built in the 1880s by French Catholic missionaries who had trekked from French Indo-China. Still lovingly cared for by the Bai and Lizu tribespeople (not Han Chinese) who live here, it remains a place of great spiritual tranquility:

The young boy is my son, Jackson. This picture was taken in June, 2001. Inside the church is an altar, and an image of the Virgin Mary, reverently venerated by the villagers:

If you trek over the Salween-Mekong watershed, crossing the 14,000 foot Si-la Pass:

(not bad for a nine year-old kid) and down to the Mekong at the bottom of one of the deepest gorges on the planet:

you’ll come to the village of Cizhong, and this magnificent stone church, built again by French Catholic missionaries well over a century ago:

This is what it takes to see genuine Catholic Christian churches in Communist China today.

Pope John Paul II was physically seen by more human beings than anyone in the history of mankind. But not by one fifth of humanity. He traveled to 129 countries in his 27-year papacy, almost every nation on earth, even Castro’s Cuba. But not to China.

Did the Chicoms refuse to let him address their captive people out arrogance and atheistic contempt? No – they did so out of fear. The Chicoms are forever attempting to project an air of complete assurance and confidence to the world – but their refusal to be the 130th country visited by Pope John Paul II can assure us that they are scared. Scared folks are vulnerable. Religious freedom terrifies the Chicoms – so that is what we should push for.

President Bush has rightly made advocating democracy a cornerstone of his foreign policy. But that’s only one corner of freedom’s building blocks. You can expect the calls for religious freedom in China to escalate, from the White House, from Condi Rice’s State Department, from American Christians in general. Now if only the Conclave will elect a pontiff with whom George Bush can work to establish a clandestine program of support for Christians in China, as Ronald Reagan did with Pope John Paul II for Solidarity in Poland.

Working to realize the potential of hundreds of millions of Chinese into the Christian faith, and to end the Communist tyranny from which they suffer would be a worthwhile tribute to John Paul the Great.