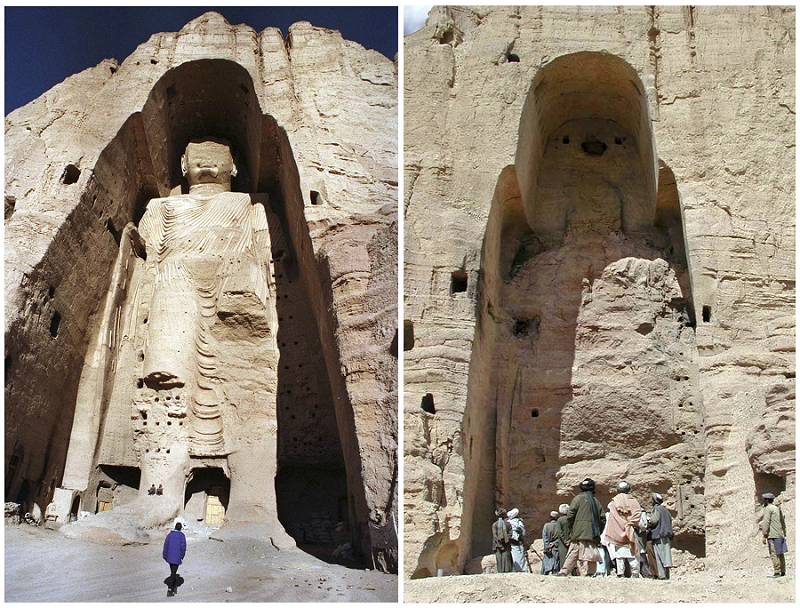 Bamiyan Buddha before and after Taliban barbarism

“Barbarians” are groups of people who engage in wanton destruction of civilized places and institutions. Barbarians are driven by a desire for others’ material goods, through theft (looting), and for power.

Barbarism has a history as long as civilization. The Roman Empire in later years was sacked by various barbarian tribes. In the 13th century, the Mongol Horde destroyed civilizations along the Silk Road to the gates of Europe (Vienna) and much of China and Korea.

In recent times, the Nazis (national socialists) started their barbaric acts by mass book burnings in 1933 in an attempt to destroy ideas they did not like. This quickly led to the theft and destruction of property owned by the Jews and others, leading to mass killings: the Holocaust.

In China, Mao Tse-tung and his fellow Communist barbarians seized power in 1949. In 1958, he launched the Great Leap Forward, which is estimated to have resulted in 30 million to 55 million deaths, primarily from the resulting famine. In 1966, he launched the Great Proletarian Cultural Revolution, which resulted not only in many more deaths but also the widespread destruction of historical and cultural artifacts.

After the Taliban seized control of Afghanistan, it undertook a reign of terror to consolidate power. As typical of barbarians, it sought to erase much of Afghan history, including the blowing up of monumental Buddhist sculptures in 2001, which were completed between the third and sixth centuries. The whole world reacted with outrage to the barbaric act.

The New Barbarians of BLM and Antifa are acting true to form. They begin by trying to deny the free speech rights of others — by establishing speech codes and “approved” speech. Then they destroy historical artifacts, including statues and monuments, and engage in the theft and destruction of the property of others.

This is usually followed by the denial of freedom of movement and assembly, and restriction, or even seizure, of weapons of self-defense, all in the name of public safety.

Finally, there is the arrest and incarceration of those who violate the new restrictions and speech codes, including the dissemination of “harmful ideas,” and assembly without permission, including attending religious services, etc.

The New Barbarians include the street thugs, who often hijack legitimate peaceful demonstrations, and then engage directly in the destructive acts, but in fact are controlled by ideologues and their financial supporters — who then, like Hitler, Lenin, Stalin, Mao and Mullah Omar, stay away from the front lines where they might be injured.

The behind-the-scenes barbarians include:

*Self-described intellectuals, most often college professors — who, in past times, were instrumental in the creation and dissemination of knowledge, but have often morphed into destroyers of knowledge.

*Members of the media, who both lack historical knowledge and are not smart enough to think beyond stage I, and who only report what they want to see, rather than what is.

*Executives of media companies who have lost their ethical compass and only see the short-run ratings increases (and profits) that come from covering and encouraging violence and chaos.

*And finally, members of the political class who have been unable to acquire total power through the ballot box and have now resorted to trying to seize power by any means.

If you, as I have, read much of the history of totalitarian movements, traveled to places where the totalitarians gained control, and talked to people who have experienced it directly or are the sons and daughters of those who have suffered, you know my comments are not an overstatement.

The New Barbarians, despite their very limited knowledge of history, are smart enough to know that they must repress and stop free speech.

In recent weeks, The New York Times, The Washington Post, CNN and others have become increasingly explicit about not allowing contrary opinions on their pages or airwaves. Petitions are demanding that editors and contributors to academic and other publications, who have different views from the new barbarians, be fired.

Twitter, Google and other “new media” are engaged in active censorship of views contrary to those held (some out of political expediency) by the heads of the companies.

Many of the New Barbarians are so ignorant of history, they fail to understand that slavery, serfdom and assorted cruelties were the norm of mankind until the last couple of centuries. (In fact, a couple of African countries only made slavery illegal in recent years.)

If today’s standards were applied to all of those depicted in the world’s historical monuments, most would need to be destroyed. This includes the one to President Franklin Roosevelt in Washington, D.C., who put 120,000 innocent Japanese-Americans in concentration camps in 1942 because they had the “wrong” ancestry.

Students are no longer taught about the Scottish Enlightenment and its leaders, like David Hume and Adam Smith, whose ideas so influenced the American Founders.

Many of the statues and monuments, from at least the time of ancient Greece, were erected to honor — and remind future generations — the contributions that those so depicted made to human knowledge and the advancement of civilization.

Their destruction will only add to ignorance, not understanding.