THE MESS ROSENSTEIN MADE 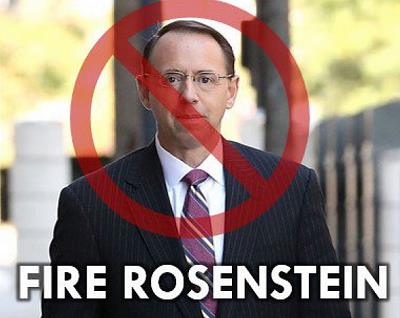 Many liberals and critics are under the mistaken belief that President Trump is violating the rule of law and civil liberties by criticizing the Robert Mueller investigation and by ordering the Justice Department’s Inspector General to investigate whether or not the FBI spied on his 2016 presidential campaign.

In fact, the president is behaving totally lawfully, and it is Robert Mueller and Deputy Attorney General Rod Rosenstein who are acting unconstitutionally and who are violating Trump’s civil liberties.

Presidents George Washington, John Adams, and Thomas Jefferson all gave orders to federal prosecutors to bring prosecutions, and Jefferson ordered a prosecution stopped. President Trump is entirely within his rights to ask the Justice Department’s inspector general to investigate whether the Obama administration got the FBI to spy on Trump’s campaign.

As I explained in the Wall Street Journal last week (5/13), Robert Mueller’s appointment is unconstitutional under Chief Justice Rehnquist’s majority opinion in Morrison v. Olson. The basic problem is that Mueller is more powerful and famous than are any of the 96 U.S. attorneys, but unlike them he was never nominated by the president and confirmed by the Senate.

In this investigation, Mueller is not acting like an assistant U.S. attorney who is an inferior officer. He is instead acting like a U.S. attorney, who is a principal officer and who must be nominated by the president and confirmed by the Senate.

This includes obtaining a log of calls by President Trump’s personal lawyer Michael Cohen, and his referral of Cohen to the United States attorney’s office for the Southern District of New York.

Both the logging and the referral are examples of what the Supreme Court calls the fruit of a poisonous tree.

When an official uses government power in an unconstitutional way, anything that results from it is subject to the exclusionary rule and is not admissible in court.

Since the investigation by the U.S. Attorney’s office for the Southern District of New York was started due to an arguably unconstitutional call log that violates both the Appointments Clause and attorney-client privilege, the federal courts should hold that any prosecutions that result of Cohen or anyone else that grew out of the Mueller referral are unconstitutional and null and void.

Moreover, Mueller’s prosecution of former Trump campaign chairman Paul Manafort in Virginia is unconstitutional even if some of his prosecutors have special status as members of the relevant U.S. Attorney’s office in that state.

Their actions are under Mueller’s supervision. Because of Mueller’s unconstitutional appointment as special counsel, the raid of Manafort’s house is also the fruit of a poisonous tree.

Deputy Attorney General’s Rod Rosenstein’s refusing to make public his full order appointing Mueller and defining the scope of Mueller’s investigation calls to mind the secret trials of the Court of Star Chamber in England, which has been justifiably reviled since its abolition in 1641.

I am not aware of any prior deputy attorney general of the United States who has made as big and as consequential a mistake as has Rosenstein in his appointment of Robert Mueller.

Not only has he violated Trump’s civil liberties and the rule of law by unconstitutionally giving Robert Mueller the powers of a principal officer without Mueller’s having been nominated by the president and confirmed by the Senate, he has undermined in the American people’s eyes the integrity of the Justice Department itself.

Steven G. Calabresi is Clayton J. & Henry R. Barber Professor at Northwestern University’s Pritzker School of Law. He is co-author of “The Unitary Executive: Presidential Power from Washington to Bush.”