THE MASK POLICE OF THE LEFT 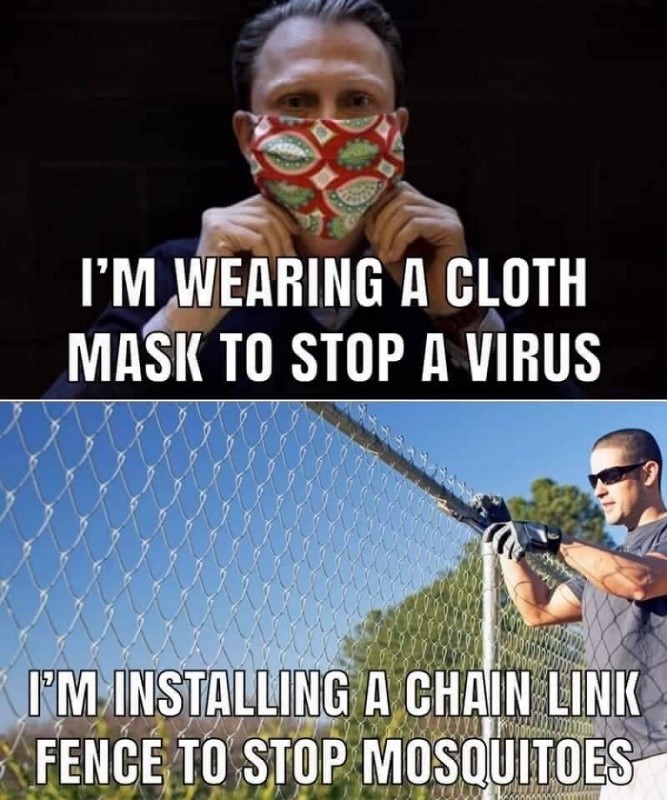 There have been several great columns on the debate over mask-wearing in public.  Scott McKay at American Spectator explains why the mask is essentially useless:  The mask is not an adequate defense against the COVID-19 virus, gang.

The virus checks in at somewhere between 0.06 and 0.14 microns, meaning it’s too small for any commercially available mask to effectively filter it out. The pores on an N95 mask, which are the best masks you’re reasonably going to find, are 0.3 microns.

The vast, vast majority of you are not going to have N95 masks but rather cloth masks, which perform far less well.

Over at Powerline, John Hinderaker  writes about how “wearing face masks has become a cultural divide….On the left, mask wearing has become a basic marker of good citizenship, no matter how silly it may be…”

Then on Tuesday (5/26) at the Federalist, David Marcus astutely observes that the mask has become the political symbol of 2020.  Indeed it has.

In Staten Island a mob of “Karens” forced a woman from a store for not wearing a mask and they were not at all polite about it; they were vicious. This is all the end result of the wholly unnecessary lockdown of the American economy which was based on fallacious “science” from the outset.

It is the distillation of the cultural divide.  We are a nation split between the fearful, those easily frightened by anything they read in the mainstream media, and the not-by-nature fearful who are justifiably suspicious of the nonsense spewed forth by the mainstream media.

Now we know exactly who believed every word the NYT, the WaPo, CNN, MSNBC, ABC, and CBS published or declared about Trump having colluded with the Russians to rig the election – and those of us who knew three years ago that it was all a carefully-constructed hoax, a treasonous attempt to overthrow a duly elected President in order to cover up their many crimes committed to prevent his election.

We knew then, thanks to the few legitimate journalists alive today, that the Clinton campaign had commissioned the phony dossier and paid for it.  Those of us who read one or more of these books have long known that this attempt to destroy a president is the most serious political scandal in U.S. history:

*Lee Smith’s The Plot Against the President

Each of their books are heavily footnoted so all relevant documents that were available to them are easily accessible.  But the mainstream media studiously ignored the work of each and every one of these fine reporters.

There were of course hundreds of well-researched articles by real reporters that exposed the hoax nearly every step of the way but they were all ignored or ridiculed by the all-powerful mainstream media, the true enemy of the people.

No doubt more books will be forthcoming as more and more proof of the Democrat conspiracy to remove President Trump from office is revealed, as more documents are de-classified.

But we now know what every member of the House Intel committee has known for years, that not one witness from the Obama administration knew of nor had seen any evidence of the Trump campaign’s  collusion with Russia.  They all lied in public for three years but had told the truth under oath.

And yet, despite all the research available to all of us on the truth of the attempted coup, all those fake news outlets refuse to admit their willing part in the scam.  Not one of them has returned their Pulitzer won for reporting lies based on a hoax and a cover-up.

This cultural divide has become clearer and clearer over the last three years as the Never-Trumpers become more and more unhinged, more desperate to convince the rest of us to denounce the man who brought us the best economy in decades until this virus was used to sabotage it.

Does anyone doubt by now that the lockdown, based on ridiculously exaggerated predictions, was a Deep State plan to destroy Trump by destroying the American economy or that the blue state governors’ intentions to extend it as long as possible is part of that ploy?

Heroes of the Left, Drs. Anthony Fauci and Deborah Birx have been wrong, wrong, wrong.  Long ago the great Thomas Sowell wrote that “It is hard to imagine a more stupid or more dangerous way of making decisions than by putting those decisions in the hands of people who pay no price for being wrong.”

The lockdown was never needed.  The hospitals were never overrun, the mortality rate has been a fraction of what the “scientists” predicted.  The “data” has all been corrupted.  Thousands of those who have died these past few months died of other illnesses, drug overdoses, even homicides but were counted as having died of COVID-19.

As everyone knows by now, most of those who have actually died with the virus were both elderly and already ill.  Thanks to Gov. Andrew Cuomo in New York, these most vulnerable citizens were herded together in nursing homes that were wholly unprepared to handle so many sick people.

After whining about all the things he needed and which Trump saw to it that he received– field hospitals, ventilators and the hospital ship, Cuomo chose instead not to make use of those provisions.  But masks?  Yes, Cuomo says everyone must wear a mask, no matter how unhealthy unless one is particularly vulnerable.

Jon Gabriel gives a good accounting of the two types of people who have been revealed since the virus came to visit, “Karens” and “Sharons.”  Karens would be the ones who virtue-signal by shaming anyone not wearing a mask, Sharons those who live and let live.

On the Left, masks have become a fashion statement!  Alyssa Milano tweeted out herself wearing a hand-knit mask.  How is that for genius?

Gov. Ralph Northam of VA has ordered all Virginians to be masked both inside and outside but he visited the beach over the weekend without one.  Gov. Gretchen Whitmer has decreed all manner of silly restrictions on Michigan’s citizens but, like J.B. Pritzker of Illinois, believes herself to be exempt.

The Mask Police are often the biggest hypocrites.  Neighborhoods all over the nation are being split by the fearful-yet-controlling mask tyrants and those who possess common sense.  Gov. Gavin Newsom of California is gleefully keeping most of California’s businesses shuttered despite that fact that the deaths there have been only .0001% of the California population.

This proves that his tyranny over the state’s small businesses is just that, an iron grip without any legitimate cause beyond damage to the Trump administration.

The silver lining of this strategy to use this virus as an instrument of control, (a strategy that is even more destructive than the Russia hoax), is that millions of former Democrats are waking up to the oppressive tendencies of Democrats and cannot wait to vote out these despots.

The power of the mask police will be short-lived for “The self-righteous scream judgments against others to hide the noise of skeletons dancing in their own closets.”  –John Mark Green