THE LEFT WANTS ANOTHER FRENCH REVOLUTION 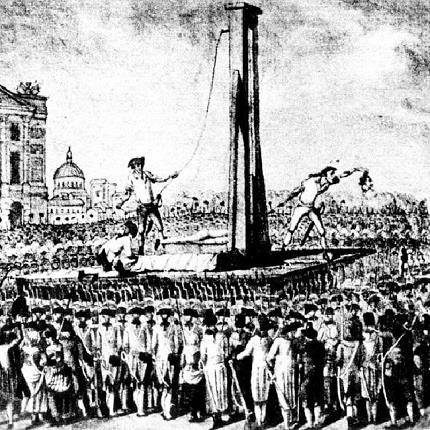 When legal bloodhounds and baying critics fail to take out Trump, what’s next? The Left’s “Resistance” wants Trump’s head — on the chopping block.

On the domestic and foreign fronts, the Trump administration has prompted economic growth and restored U.S. deterrence. Polls show increased consumer confidence, and in some, Trump himself has gained ground.

Yet good news is bad news to the Resistance and its demonic continued efforts to stop an elected president in a way it failed to do in the 2016 election.

Indeed, the aim of the so-called Resistance to Donald J. Trump is ending Trump’s presidency by any means necessary before the 2020 election. Or, barring that, it seeks to so delegitimize him that he becomes presidentially impotent.

It has been only 16 months since Trump took office and, in the spirit of revolutionary fervor, almost everything has been tried to derail him. Now we are entering uncharted territory — at a time when otherwise the country is improving and the legal exposure of Trump’s opponents increases daily.

Then there was the doomed celebrity effort to convince some state electors not to follow their constitutional duty and to deny Trump the presidency — a gambit that, had it worked, would have wrecked the Constitution.

Then came the pathetic congressional boycott of the inauguration and the shrill nationwide protests against the president.

Next was the sad effort to introduce articles of impeachment.

After that came weird attempts to cite Trump for violations of the emoluments clause of the Constitution. That puerile con was followed by plans to declare him deranged and mentally unfit so that he could be removed under the 25th Amendment.

All this while, Obama holdovers in the DOJ, National Security Council, and FBI sought to leak information, or they refused to carry out presidential orders.

As the Resistance goes from one ploy to the next, it ignores its string of failed prior efforts, forgetting everything and learning nothing.

State nullification is no longer neo-Confederate but an any-means-necessary progressive tool. Suing the government weekly is proof of revolutionary fides, not a waste of California’s taxpayer dollars.

Anti- and Never-Trump op-ed writers have long ago run out of superlatives. Trump is the worst, most, biggest — fill in the blank — in the history of the presidency, in the history of the world, worse even than Mao, Mussolini, Stalin, or Hitler. So if Trump is a Hitler who gassed 6 million or a Stalin who starved 20 million, then logically Trump deserves what exactly?

The book industry is doing its part. Mythographer Michael Wolff’s hearsay Fire and Fury suggested that Trump was a dangerous child despised as much by his friends as by his enemies.

As  FBI director, James Comey leaked confidential memos, lied to Congress, misled a FISA court, admitted that he based his handling of the Clinton-email investigation on the assumption she’d win the presidency, misinformed the president about the status of his investigation.

And the now-former director book-tours the country slamming Trump hourly on the assumption that he would certainly not be former, if only his prior obsequious efforts to appease Trump had saved his job.

Comey is building perjury cases against himself daily with each new disclosure that belie past sworn testimonies, but that is apparently less scary to him than simply ignoring Trump.

Robert Mueller and his “dream team” were long ago supposed to have discovered proof of Trump’s collusion with Russia. A year later, they have found nothing to do with this mandate.

So, suddently the alternative scent was obstruction of justice. Then the chase took another detour to follow some sort of fraud or racketeering.

Now the FBI is reduced to raiding Trump’s lawyer in an effort to root out the real story on Stormy Daniels. Stormy Daniels?  How low can the FBI go?

One wonders what might have happened had Michael Cohen panicked and destroyed 30,000 emails before Mueller seized his computers.

No matter, Mueller’s legal army presses on, even as it leaves its own wounded on the battlefield, as resignations, reassignments, and retirements for improper conduct decimate the Obama-era FBI and DOJ hierarchies.

Trump has left the intelligence community unhinged. John Brennan (“When the full extent of your venality, moral turpitude, and political corruption becomes known, you will take your rightful place as a disgraced demagogue in the dustbin of history. . . . America will triumph over you”) and James Clapper (who called Trump a veritable traitor working for Putin) have both admitted to lying under oath to Congress in the past.

With their present invective, they have discredited the very notion of a Washington intelligence elite.

At some point, Mueller’s zealotry will remind federal attorneys that equality under the law demands indictments of those with far greater legal exposure, regardless of the exalted status of Comey, Andrew McCabe, and — in the matter of lying under oath, leaking classified materials, and destroying evidence — John Brennan, James Clapper and Hillary Clinton.

In addition, a media, found to be more than 90 percent negative in its coverage of the Trump administration, sought to delegitimize the president with pathological rabidity.

Journalists declare that disinterested reporting is impossible in the age of Trump — and therefore believe that Stormy Daniels or James Comey’s Dudley Do-Right’s memos are a pathway to accomplish what they are beginning to concede Robert Mueller cannot.

Everything from the NFL to late-night comedy shows have become Trump-hating venues. Almost every sort of smear from scatology to homophobia has been voiced by celebrities to turn Trump into a president deserving such abuse — and worse.

Late-night television host Steven Colbert was reduced to incoherent and repellant venom: “You talk like a sign-language gorilla that got hit in the head. In fact, the only thing your mouth is good for is being Vladimir Putin’s c*** holster.”

Actor Robert De Niro has become deranged and dreams of pounding on Trump’s face. But then so does former vice president Joe Biden, who on two occasions boasted that Trump is the sort of guy that a younger he-man Biden used to take outside the gym to give a whippin’ to.

Each cycle of hysteria demands another, as the race to the bottom has descended into which celebrity or politician can discover the most provocative — or crude — Trump expletive. “S***” and “f***” are now the ordinary vocabulary of angry Democrat politicos and officeholders.

Are we reaching a point in the so-far-failed Resistance where little is left except abject violence in the manner of the French Revolution?

The problem for Trump’s pop-culture foes is not whether to imagine or advocate killing the president. That’s a given. They just need to agree on the means of doing so:

Unbelievably (or is it all too believable given the above?), now the Democrat party — whose presidential candidate, Hillary Clinton, hired Christopher Steele to find dirt on Trump with the aid of Russian sources to warp the 2016 election — is suing President Trump, alleging collusion with the Russians.

If Clinton were called as a witness, what would she say under cross-examination — that she did not hire Steele, that he never purchased Russian dirt, or that there was no collusion effort to enlist foreign nationals such as British subject Christopher Steele and Russian propagandists to warp an American election?

Insidiously and incrementally, we are in the process of normalizing violence against the elected president of the United States. If all this fails to delegitimize Trump, fails to destroy his health, or fails to lead to a 2018 midterm Democratic sweep and subsequent impeachment, expect even greater threats of violence.

The Resistance and rabid anti-Trumpers have lost confidence in the constitutional framework of elections, and they’ve flouted the tradition by which the opposition allows the in-power party to present its case to the court of public opinion.

Instead, like the French revolutionaries’ Committee on Public Safety, the unhinged anti-Trumpists assume that they have lost public opinion with their venom and crudity, and are growing evermore desperate as every legal and paralegal means of removing Trump is nearing exhaustion.

Robert Mueller is the last chance, a sort of Watergate or Abu Ghraib that could gin up enough furor to drive down Trump’s poll favorability to the twenties and thereby reduce his person to a demonic force deserving of whatever it gets.

After the prior era of hysteria, between 2005 and 2008, when books and docudramas staged the imagined assassination of George W. Bush, and celebrities like Michael Moore and activists such as Cindy Sheehan reduced Bush to the status of a war criminal, the Left in 2009 demanded a return to normal political discourse and comportment, with the election of Barack Obama.

A newly contrite and apologetic America was abruptly worth believing in again. In 2009, the CIA and FBI suddenly were reinvented as hallowed agents of change.

Bush careerists, including Clapper and Brennan, suddenly were damning the very counterterrorism practices that they once helped put in place, while offering Obama-like politically correct sermons on the benign nature of Islamism.

The IRS was weaponized for use against Obama’s ideological opponents.

Suggestions that the president was unfit or worse became near treasonous. Unity was the new patriotism. The assumption was that Obama had ushered in a half-century of progressive norms, not that he so alienated the country that he birthed Donald Trump.

The danger to the country this time around is that the Left has so destroyed the old protocols of the opposition party that it will be hard to resurrect them should progressives return to power.

We are entering revolutionary times. The law is no longer equally applied. The media are the ministry of truth. The Democrat party is a revolutionary force, wanting a French Revolution of the Guillotine. The Left really wants Trump’s and our heads to actually roll.  Will we let them?