2 The Point News » Guest Authors » Members Only » THE LEFT VS. THERMODYNAMICS

THE LEFT VS. THERMODYNAMICS 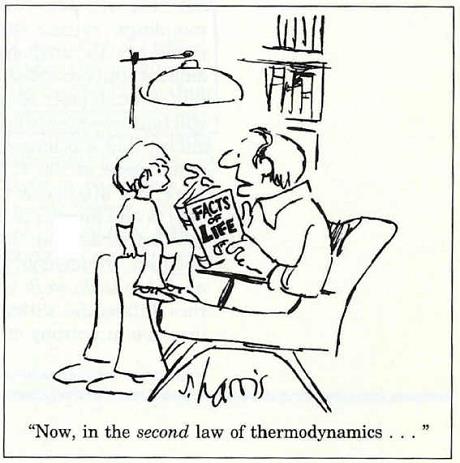 [Note by JW: Here is more proof that so much of the unique value of To The Point lies in the brilliance of TTPer contributions to the Forum. Duane Purvin’s comments on Victor Davis Hanson’s The Evil of the Global Elite (12/18) are an example, while Mike Ryan’s are simply breathtaking.  Again, the best Christmas Present you can give a friend or loved one is a Gift Subscription to TTP!]

“Even the Constitution is being re interpreted, the New Testament, Gender, conversion of concepts of individual liberty/freedom into identity politics and Reality as recognized by an educated, sentient man as now created and fed to humankind in the trough of social media, propaganda, omission and lies.”

“They construct their own realities , pretend serial outrages to look caring, connect the dots of their fake reality and almost always misunderstand what is actually going on… and clinging to their construct, they cannot be reasoned with, build absolutely nothing, tear down everything they touch or hate because of its nobility, cannot and will not stop seeking some definition of Power as protection from being found out…”

“Hence, Power under any definition that allows them to steal, use, confiscate or possess another person’s possessions or life is the goal…maybe they cannot connect the dots, but they know wealth and power…we are watching the fall of America, going quickly, to be replaced with horrors much greater than seen before in history..”

The problem is a product of the humanities departments at the elite universities as Hanson pointed out. The sciences and applied science departments are much less of a problem.

Why? The intersection of Rationalism and Empirical science is known as thermodynamics.

Nothing like it exists within the programs favored by the Left. Show me a conservative university department, and I will bet a box of donuts that thermo is part of the curriculum in one form or another. Either to be taught as physical laws or as spiritual or philosophical virtues.

Albert Einstein said, “Thermodynamics is the only physical theory of a general nature of which of which I am convinced will never be overthrown.”

Roughly during the era from 1850 until about 1890 a new understanding of the universe emerged from the work of British, French, German, and American scientists and engineers.

These are the great men that taught the world to apply heat to produce work. They taught the world that different levels of order create value and that everything changes. Their empirical insights fit nicely with Buddhist, Hindu and Abrahamic concepts of the universe developed through rationalism.

Our elites strive to overturn the work of the ages to create a world where all resources flow to them.

“Whom do the globalists despise?
The carbon spewing Winnebago owners, the snowmobilers, the jet skiers.
The Glock packers, the Elks Clubbers, the lathe workers, the 101st Airborners with molôn labé tattooed on their arms.
The 7-11 owners, the nutty Brit who speaks reverentially of Churchill, the dumb grubby French guy on a tractor who has no clue that his diesel engine must soon be replaced by three-hour batteries.”

VDH could be describing my neighbors. These people share a commonality in that they apply heat and burn fuel per the laws of thermodynamics.

They might not be versed in the math, but they all share a phenomenological understanding of the core concepts. And for this, the elites proclaim, they must be killed.

This theme has been ongoing for a long time as the Titan Prometheus was bound to a rock while Zeus sent an eagle to devour his liver every day for sharing the secret of fire with the masses.

The 19th century aristocracy of old saw their world collapse as the new understanding of heat made all of their Feudal land holdings and labor pools obsolete.

Perhaps many thought that WWI would eliminate the new science and restore the world order. It certainly killed enough Brits, French, and Germans to wipe them out as thought leaders. The Russians did not try to eliminate science as Old Europe did. Instead, the Russians tried to place scientific outcomes under political control.

Fast forward to today, and the new virtual digital reality aristocracy has joined forces with the social-humanities crowd to have another try at eliminating those pesky thermodynamic laws that govern the real world.

They want to eliminate market economies without realizing that socialism violates the ensemble approach to thermodynamics.

It is normal and part of the natural laws for uncountable millions of economic conditions to occur simultaneously. Command and control violate thermodynamic principles in systems governed by probability.

But the new aristocrats don’t acknowledge this because calculus and probability theory are not required courses in Women’s Studies programs or journalism school. They do not speak the language taught to humanity by the mythical Prometheus.

The Soviets learned the hard way that thermodynamic laws cannot be bent and probabilistic macro events will happen according to the percent of time each component micro event occurs within the overall economy. Our new elites don’t seem to grasp the physical laws behind civilization.

The new aristocracy sees control of information as the new thunder and lightning, and themselves as some kind of Zeus on Olympus.

They seek to bind Western Civilization to a rock.

The elite’s Hubris of information control will meet the Nemesis of physical reality. Attempts to override the physical laws of the universe through massive propaganda and weaponized information dumps thrown as lightning bolts down from Olympus will lead us to a reckoning moment.

Defying the natural laws is a fool’s game that must be consuming great amounts of the Left’s resources. They will deplete themselves eventually but many will die before the information elite’s demise.

Mike Ryan is an engineering consultant to the minerals, fibers, and chemical industries.