2 The Point News » Guest Authors » Members Only » THE HOPE OF CHINA: DISSOLVING THE CCP FROM WITHIN

THE HOPE OF CHINA: DISSOLVING THE CCP FROM WITHIN 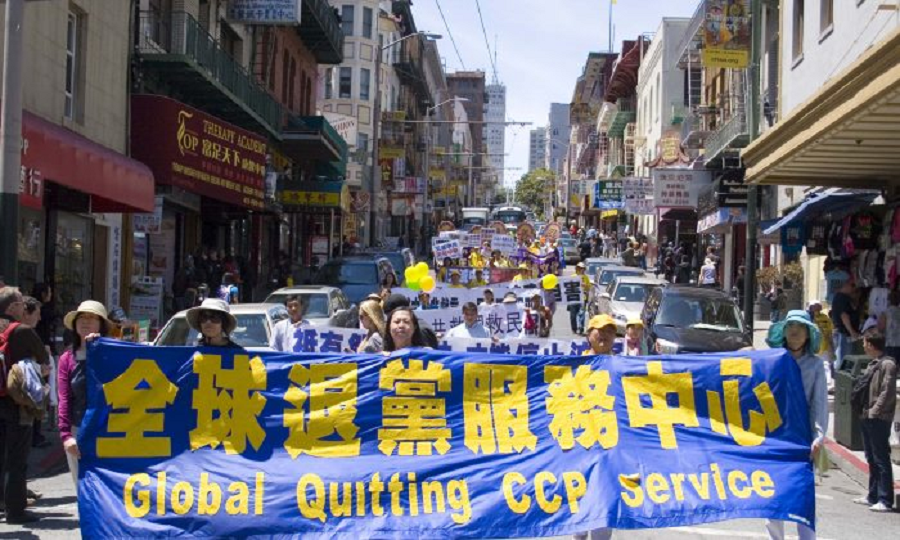 Remember the Chinese word tui-dang.  It means “quit the party” – as in the that of the ruling Chicoms.

On yesterday, April 20, the number of people who have published their declarations to withdraw from the Chinese Communist Party (CCP), its Youth League, and the Young Pioneers exceeded 376 million.  That’s no typo. Three hundred and seventy six million Chinese have publicly quit the CCP.

China experts are now saying that this grassroots Tuidang (Quit the Party) movement that started in 2004 may trigger the disintegration of the CCP within 5 years.

Withdrawing from the CCP, its Youth League, and the Young Pioneers is also referred to as the “Three Withdrawals” by Chinese people.

In other words, at least one out of every four Chinese people has publicly declared his or her opposition to the CCP and resigned from the CCP-related organizations.

In the communist system, besides the Communist Party, there are also the Communist Youth League and the Young Pioneers under its control.

The elementary schools regularly hold a pledge ceremony in which the children raise their right fist to the red Young Pioneers flag and swear, “I am a member of the Young Pioneers of China. Under the flag of the Young Pioneers, I pledge to love the CCP, the motherland, and the people; to study well, to exercise well, and to be ready at any moment to contribute all my strength to the cause of communism.”

That is to say, under the communist system, children as young as six years old are required to swear an oath to be ready to contribute “all their strength” to communism before they have any understanding of it.

When children enter high school, they are asked to join the Communist Youth League on a semi-compulsory basis. Again, the students are required to raise their right fist and make a pledge:

“I pledge to join the Chinese Communist Youth League voluntarily. I firmly support the leadership of the CCP, abide by the constitution of the Youth League, carry out its resolutions, fulfill its obligations as a member, strictly abide by its discipline, study diligently, work actively, make contributions and suffer hardships before others, let others take the benefits before me, and strive hard for the cause of communism.”

The current version, which was established in 1982, goes like this:

Since the CCP is the ruling party in China, members of the CCP can enjoy many benefits. As a result, the number of people who can be approved to join the CCP is small.

However, over 95 percent of Chinese people have joined the Young Pioneers, which means that out of a population of 1.4 billion, the maximum number of people who can possibly make a three-withdrawal statement is 1.3 billion.

A Movement Triggered By the “Nine Commentaries on the Communist Party”

The Tuidang movement, which is also called the Three Withdrawals movement, was triggered by the editorial series “Nine Commentaries on the Communist Party,” first published in the Chinese language edition of The Epoch Times on Nov. 19, 2004.

The “Nine Commentaries on the Communist Party” comprehensively exposes the bloody killing history of the CCP and gives an in-depth analysis of the deceptive, violent, cultish, and rogue nature of the CCP in different areas of history, politics, economy, culture, and faith.

Part 7 titled, “On the Chinese Communist Party’s History of Killing,” states that “Under the rule of the CCP, 60 to 80 million innocent Chinese people have been killed, leaving their broken families behind.”

On Feb. 22, 2005, more than 10 organizations, including The Epoch Times media group, the Farewell to the CCP Alliance, the Global Coalition to Bring Jiang [Zemin] to Justice, and the Nine Commentaries website, joined forces to establish the Global Service Center for Quitting the CCP, a non-profit service organization that assists people with the Three Withdrawals.

Because the CCP is a dictatorship, Chinese people are under strict control. For safety reasons, many people chose pseudonyms when they published their Three Withdrawal statements. They believe that God sees people’s hearts and they are undoing their deadly pledges made to the CCP by disavowing them.

Volunteers at the Global Service Center for Quitting the CCP check the statements to ensure they are authentic before they can be released online.

After the statement is published, a certificate in both English and Chinese becomes available for the submitter to download and print out.

A noticeable phenomenon during the early stages of the Tuidang movement was that a significant number of the Three Withdrawals came from the top echelons of the CCP, including officials from the State Council, ministries, the National People’s Congress, the Central Party School, and provincial and municipal cadres.

For example, a person from the State Council used the name Hua Tianming to submit a statement on Dec. 27, 2004. The statement reads, “It was against my will to be a henchman. I want to say sorry to Chinese people. I only hope that the CCP can be ended sooner.”

His sign-off stated that he was a member of a certain office of the State Council.

One statement published under the name of Li Bochun on Dec. 22, 2004, reads, “I am a retired technical cadre of national defense with 43 years of military experience and more than 30 years of Party membership.  I used to believe whatever my superiors said, but it was only after I retired that I really understood the evil nature of the CCP.”

Another statement published on Dec. 22, 2004 under the name of Li Linying states, “I was once a military cadre; I was deceived and believed in the CCP. However, the naked truth of the CCP’s evil cult nature has now been completely exposed. I have been following closely this evil cult for over a decade. Although I didn’t do anything bad, I nonetheless have also empowered it. Today I finally understand. I hereby solemnly declare my withdrawal from the communist cult.”

China Expert: The CCP Will Dissolve from Within

In late 1989, Republic nations that once joined the Soviet Union declared independence, and U.S. President George H. W. Bush and Gorbachev jointly declared the end of the Cold War.

As a result of the long period of autocracy and corruption, there was a wave of resignations from the Communist Party of the Soviet Union before its dissolution, with more than 20 percent of its members eventually leaving the Party.

Similarly, the Tuidang movement in China has empowered about 27 percent of the Chinese population to reject the CCP in one way or another so far.

The current number of Chinese people who have rejected the CCP is more than the 20 percent of communist members who quit the Soviet Union before it collapsed. So why hasn’t the CCP fallen yet? China expert Shi Shan says that there are many reasons, but the main two are:

First, the CCP is the most powerful ruling group in the history of mankind in terms of controlling people. No other regime in history or in the world was like the CCP, which not only controls where people can live through a household registration system, but also controls people’s beliefs and thoughts, their jobs, family life, and even how many children they can have.

With the assistance of high technology, the CCP today uses the most invasive surveillance methods to control everyone’s daily lives. Communist rule is like a high-pressure cooker, making people inside unable to move.

Second, the CCP uses the mainland market as bait, linking the economy to politics to draw in international capital investment in China that brings in new nutrients and blood to the critically ill body of the CCP, allowing it to continue to survive.

However, Shan adds that the tide of the Tuidang movement has already started to dismantle the CCP from within.

Although many people did not openly disclose their true identities when they withdrew and were still outwardly working for the CCP, they had essentially separated themselves from the CCP in their hearts. Once the external environment changes, this internal opposition force will contribute to the rapid collapse of the CCP.

Shan notes that based on the current rate of the Three Withdrawals, there are at least 50,000 people withdrawing per day. This means more than 20 million in a year. In five years, more than 100 million more people will have withdrawn.

With the current number being more than 376 million, by 2026 the total number of Three Withdrawals could reach 500 million, which accounts for 35 percent of the 1.4 billion people.

This also means that at least one out of three people will have withdrawn.

He said, “By that time, the CCP will disintegrate from within, just like the Soviet Communist Party.”

Of course, this is simple linear math.  The Tuidang Movement is gaining momentum and is accelerating rapidly.  No one expected the Soviet Union to collapse so quickly.  The same may be the fate of Communist China.

Jennifer Zeng and Sherry Qi are freelance researchers who write on Chinese affairs.