THE GOLDEN FLEECE OF FREEDOM

When you were a kid, do you remember reading the great epic of Greek mythology called Jason and the Argonauts?

Sent on a mission he is not expected to survive by the man who has usurped his throne, Jason assembles a crew of heroes, including Hercules, Orpheus, Castor and Pollux, and sails in the great ship Argo across the Euxine Sea to the distant land of Colchis to capture the legendary Golden Fleece.

It’s a marvelous adventure story which the ancient Greeks believed was not myth but true. And sure enough – it turns out that Colchis was a real place and there really was a Golden Fleece.

At the east end of the Black Sea (the Greeks called it the Euxine), there is a range of huge mountains called the Caucasus. The mountain streams that poured down the Caucasus and into the Euxine carried so many particles of gold that the folks who lived there – the Colchians – would peg sheep skins in the streams to trap the gold particles in the wool.

Colchis is one of the most ancient lands in the world. It’s where the original Caucasians came from. Today it is called Georgia. This week, George Bush sailed in Air Force One to modern Colchis to be wildly welcomed by hundreds of thousands of Georgian Argonauts thanking him for rescuing the Georgian Golden Fleece from its former conqueror, Russia.

It’s hard to even begin describing how cool Georgia is. Here’s an example: 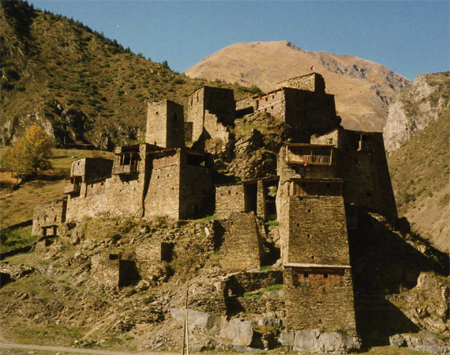 Or how about this: 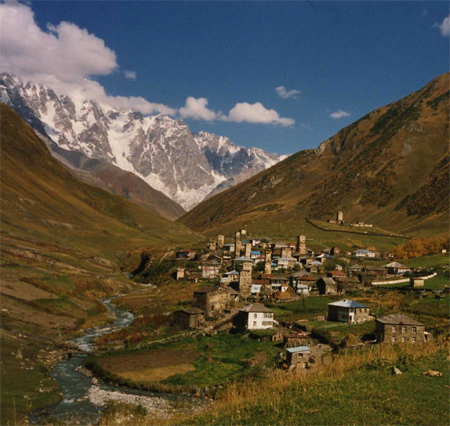 This is Ush-Guli high in the Caucasus in a region known as Svanetia. It’s the highest village in Europe and even more remote than Khevsureti. Although it’s a World Heritage site, very few people ever are able to reach it. I got there by helicopter.

The people of Ush-Guli are overwhelmingly friendly – perhaps a bit too much so. Having a meal with Svanetians involves endless toasts, drinking from ram’s horns filled with their local firewater. The drunkest I ever got in my life was in Ush-Guli.

Then again, most everywhere you go in Georgia, people are overwhelmingly friendly. Great food, great wine, those endless toasts, thousands of years of history – yet they spent those millennia fighting off foreign invaders: Romans, Persians, Arabs, Seljuk Turks, Mongols, the hordes of Tamerlane, Safarid Persians, Ottoman Turks, and finally the Russians who annexed Georgia in 1801.

Throughout the centuries – centuries of attempts to force Islam upon them – they clung to their Christian faith, which they had adopted in the 1st century AD. Many of the oldest Christian churches in the world are in Georgia. The very country is named after its patron saint, St. George (fl. 300 AD), with a long succession of kings named Georgi.

When the Bolsheviks took over the Russian Revolution on October 25, 1917, Georgians broke free, declaring an independent state on May 26, 1918. The new Soviet Russian government signed a treaty recognizing Georgian independence on May 7, 1920. It was of course a ruse.

The Red Army invaded in February, 1921. Even though the leader of the Soviet Union, Josef Dzhugashvili – who assumed the name Stalin or “steel” in Russian – and his head of the Soviet KGB, Lavrenti Beria, were both Georgian (Stalin was born in Gori in 1879, Beria in Mingrelia in 1899), they oppressed their fellow countrymen worse than the Czars.

Just as they rejected Islam and remained Christian, so did the Georgians reject Communism. When the Soviet Union began to disassemble after the fall of the Berlin Wall (November 9, 1989), they broke free again, led by Zviad Gamsakhurdia, the Father of Georgian Independence.

I first met Gamsakhurdia in June, 1991. He had written the Georgian Declaration of Independence passed by parliament on April 8, and had been elected president on May 26 – while Gorbachev was still trying to hold the USSR together.

It was an intense time and he was a little preoccupied. Nonetheless he had me and my son Brandon (age 7) flown all over the country in his private helicopter. I fell in love with the place.

But the next dozen years were not kind to Georgia. A former Soviet apparatchik, Edvard Shevardnadze, was able to stage a coup in December 1991, and had Gamsakhurdia assassinated on December 31, 1993. Not until December 2003, with the “Rose Revolution,” did Georgia at last become democratic and truly free.

Well, maybe. It almost seems that Russians have a defective gene that compels them to be imperialists. If they can’t re-colonize Georgia, then they’ll do their best to bite off parts off it. Notice on this map of Georgia the regions of Abkhazia, Ajaria, and South Ossetia: 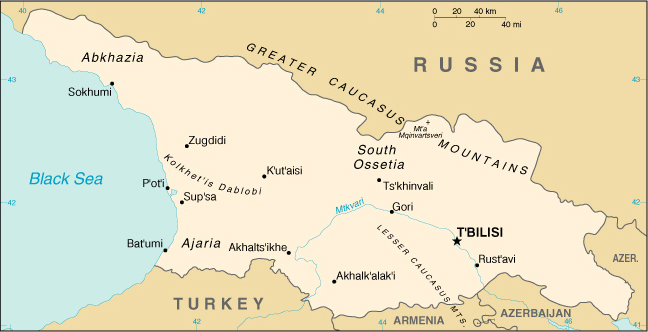 In all three regions, the Kremlin stationed Russian troops, supported separatist movements, and instigated civil wars. The new Georgian president, Mikhail Saakashvili, was finally able to kick out the mafiocracy of Aslan Abashidze from Ajaria in May 2004, but the Russians refuse to get their soldiers out of Abkazia and South Ossetia to this day.

So little wonder that over a quarter million Georgians turned out to hear the President of the United States celebrate the day, April 9, 1991, the statue of Lenin was pulled down at the very spot where he was speaking, and tell them “Americans respect your courageous choice for liberty – as you build a free and democratic Georgia, the American people will stand with you.”

They cried tears of gratitude when his words were meant for Russia: “The territory and sovereignty of Georgia must be respected by all nations.” (You can read the entire speech here .)

The people of Georgia recognize George Bush as the savior and protector of freedom that he is. Why can’t the Russians?

Churchill said Russia was an enigma wrapped in a riddle inside a puzzle. Why can’t they live in peace with their neighbors instead of always wanting a piece of their neighbors? Part of the answer must lie in there being no word for “peace” in the Russian language.

For us peace means freedom, people being left alone without violence so they can conduct their lives and work towards their goals peacefully.

For Russians, peace means conformity: when people are all good little boys and girls and do what they are told by their rulers, you have order and therefore peace.

Mir, Russian peace, can only come by being forcefully imposed on people and is always win-lose.

As Lenin said, there is but one question of any importance in human relations: Kto-Kovo? Who-Whom? Who wins, who loses? For Lenin, the only way to win was to make someone else lose.

The concept of win-win, of mutual cooperation for mutual benefit was incomprehensible to him (literally, like creating something out of nothing). Putin, the ex-KGB agent looks at the world the same way. It’s the Russians’ fatal mind-flaw.

Until Putin and his fellow Russians abandon Kto-Kovo, the people of Georgia and those of other former Russian colonies will continue to look upon them as threats – and to seek protection from America. The people of Georgia are determined that their Golden Fleece of Freedom never be stolen from them again.