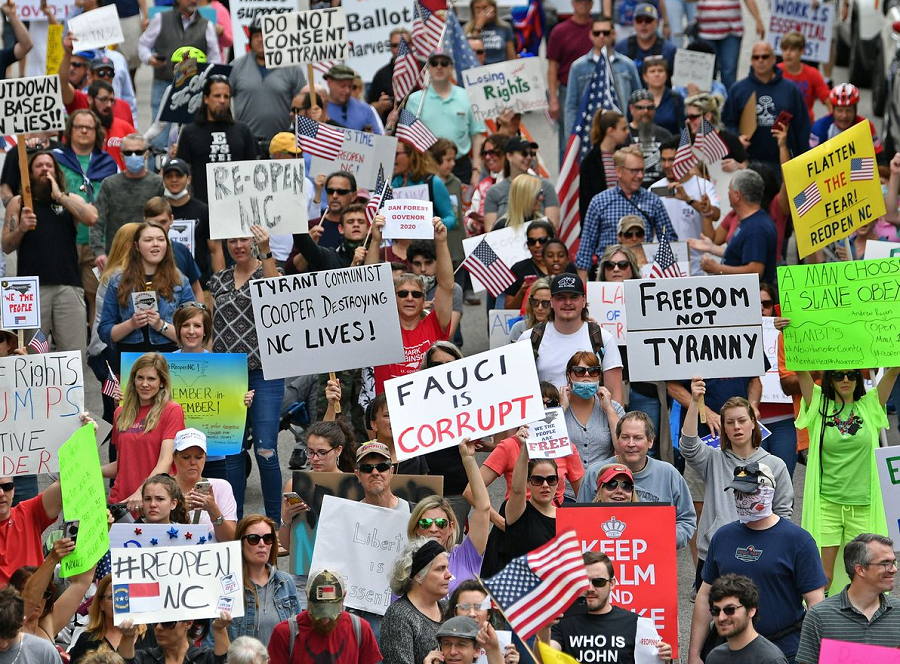 If people were living in a dystopia, how many of them would know it?

The current situation certainly raises the question, as we experience unprecedented restrictions on individual freedom adopted in response to the China Virus, coupled with left-wing riots that undermine the legitimacy of America’s core institutions.

It’s becoming clear that these social changes are dystopian, not merely because they are harmful and coercive, but because they seek to replace the American way of life with a new social order rooted in their vision of a totalitarian utopia.

Let’s look at how this is happening – here in America and elsewhere in the world.

In a January 2019 essay on the overuse of the word “dystopia” in American political discourse, Miami University of Ohio professor Ryan J. Barilleaux wrote that the defining features of an actual dystopia are “social regimentation, dehumanization, abuse of technology, state terror, a new class of rulers, propaganda instead of truth, inevitable totalitarianism, and the tragedy of the individual.”

“When combined, these features sketch the map of dystopia,” wrote Barilleaux.

“Dystopia is what results from the attempt to create utopia,” he explained. “Consider the society of Brave New World, which is horrible precisely to the extent that the World State was designed to be exactly as it is.”

This year’s warp-speed cultural transformation has brought about all of Barilleaux’s hallmarks of a dystopia. The utopia today’s bureaucrats and elitists are striving toward is a global, communistic police state. This police state is sold to ordinary people not as that, but as a safe, virus-free society. Who wouldn’t want that?

Its architects admit that they won’t stop at a vaccine. “We will not, we cannot go back to the way things were,” World Health Organization (WHO) director-general Tedros Adhanom Ghebreyesus said August 21.

Nonsensical “virus prevention” measures — forcing people to wear masks alone outside, curfews suggesting that the virus is more deadly at night than during the day — are priming the public to submit to increasingly arbitrary forms of government control and surveillance.

The social regimentation of our new COVID world is ritualistic and religious. Hand-washing, staying physically away from others, walking only in certain directions at the grocery store, and not socializing are sacrosanct practices.

Snitch lines, bizarre rules about which doors students can use, all-online classes but no cancelation of room and board fees, “testing pods,” and COVID “symptom-tracker” apps are all part of the American college experience now.

So are “social distancing” rules limiting human contact, dorm visits, and parties. Will this mean the death of hook-up culture? Will “virtual” sex and more pornography simply fill its gap? Or will sexual license trump China Virus prevention measures, just as Antifa and BLM riots have been exempt from the supposedly anti-coronavirus standards now applied to churches?

Dehumanization and the tragedy of the individual

Face masks, now required in public or to enter businesses in many places, are one of the most obvious mechanisms of dehumanization. Other people are now faceless potential virus-carriers to be avoided at all costs.

Enforcing limited or no social gatherings also dehumanizes the population. Humans are social creatures. Can existence be joyful, meaningful, and fulfilling if human contact is as severely limited as it has been ordered to be?

The crushing discouragement of family life is not only dehumanizing, but also one of the coronavirus power-grab’s greatest contributions to the tragedy of the individual.

“The ultimate result of dystopia can be seen in the tragedy of an individual. In dystopian stories and novels, the [protagonist] (such as John the Savage or Winston Smith) is crushed — or nearly so — as a way to make clear just how brutal the prevailing order is. In the real dystopias of modernity, individuals come to symbolize the oppression of the regime: the survivors of Hitler’s death camps, figures such as Andrei Sakharov and Alexander Solzhenitsyn, or Otto Warmbier, the American student who died from mistreatment while in North Korean custody.”

Today’s suffering individual is best exemplified by Shelley Luther, the Texas beauty salon–owner arrested and jailed for opening her business. A judge said she could avoid jail time by apologizing for being “selfish” and paying a fine, but she refused to “bend the knee,” as her lawyer put it.

For every fighting Shelley Luther, how many Americans are there who simply gave up their dreams of running a small business because China Virus restrictions robbed them of all ambition and hope?

Abuse of technology and state terror

Big tech and liberal establishment media censor any news that counters the narrative that the China Virus — which the vast, vast majority of healthy people survive, over 99% — is the most serious disease of the century.

A press conference by the pro-hydroxychloroquine America’s Frontline Doctors group was infamously scrubbed from social media despite its massive support, even from President Trump.

At the beginning of the lockdown, authorities in the United Kingdom used drones to capture footage of and subsequently shame people who were exercising. A “social distancing” robot dog — which looked eerily like a machine from Black Mirror — prowled a Singapore park telling people to stay apart.

In Kentucky, supposedly virus-positive individuals have even been fitted with electronic ankle monitors.

Police in Victoria, Australia have been granted authority to enter homes without a warrant to carry out “spot checks.”  They arrest and jail anyone who publicly opposes total lockdowns. From an ABC Australia news report Sunday (8/13) in Melbourne:

“The so-called Freedom Walk marches are billed as ‘a legal walk, allowing citizens to come together, get healthy and talk about getting our freedoms back.’

Any protesting is outlawed in Melbourne under the current stage 4 restrictions, and people are only allowed to exercise for one hour a day within a 5-kilometre radius of their home.  Gatherings are completely banned.”

One member of the Australian Parliament compared what’s happening in Australia to Nazi Germany. You can’t blame him.

The combination of 21st-century technology and petty, power-hungry bureaucrats (as my grandmother astutely put it, “some people like to exercise what little authority they have”) has created a perfect storm. And terror isn’t coming only from the state: tech companies voluntarily pick up the slack for government incompetence.

A new class of rulers

“[D]ystopia empowers a new class of rulers and uses propaganda and state terror to maintain the power of the regime,” . “Dystopian regimes employ propaganda (‘Freedom is Slavery,’ ‘Community, Identity, Stability,’ ‘Workers of the world, unite!’) to mislead the populace and state terror (disappearances, reeducation camps, gulags, the Thought Police, the Firemen of Fahrenheit 451) to enforce conformity.”

Our new class of rulers are “public health experts.” Many of these people say there are an infinite number of genders, men can get pregnant, a human in the womb with a beating heart is just a “clump of cells,” and children should be able to attempt to “change” their sex.

They are now the ones whose interpretations of data and projections (projections being guesses) are infallible. Questioning them is to deny science, a cardinal sin.

Propaganda instead of truth

The coronavirus outbreak has produced a host of creepy “war is peace” phrases such as “staying apart keeps us together” and “social distancing.”

Actually, staying apart…keeps us apart. Staying as far as possible from other people isn’t social…it’s anti-social. How about we call it anti-social distancing instead?

This has never been about a virus

For today’s revolutionaries, this was never about any virus; rather, it is about a crisis that can be used to usher in a new world order, a “new normal,” where human beings live in fear and under constant surveillance by an all-powerful regime.

In this atomized, isolated state, the populace is easier to control, and the supposedly “virus-free” totalitarian utopia can be brought about.

However, nothing in history is inevitable. Dystopias are created only by and through the consent of those who stand by and say nothing while their liberties are taken. Americans mustn’t give tyrants a single inch. The time to fight is now, before it’s too late.