THE FBI HAS PROSTITUTED ITSELF 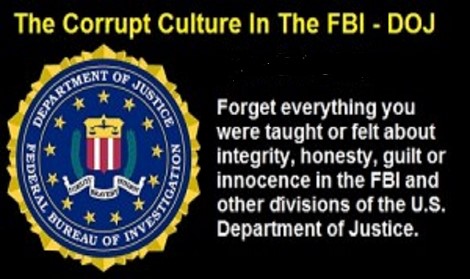 Let’s be clear.  This is a national disgrace of unprecedented historic proportions.

Citing unnamed “former law enforcement sources and others,” the New York Times reports (1/11) that “in the days after President Trump fired James B. Comey as F.B.I. director, law enforcement officials became so concerned by the president’s behavior that they began investigating whether he had been working on behalf of Russia against American interests.”

The mainstream media has touted this story as major breaking news. But, to anyone who has been paying even a modicum of attention, it is crystal clear that Comey’s firing did not precipitate the FBI’s investigation of Trump.

To the contrary, the readily available record facts demonstrate that Comey’s FBI began investigating Trump and his campaign for possible Russian collusion shortly after he won the Republican Party’s nomination.

Even though the Times would have us believe that the FBI investigated Trump out of a legitimate concern for national security, those same facts prove that, in launching and directing the investigation, the leadership of Comey’s FBI was engaging in partisan presidential politics to further their own corrupt interests. Here’s why.

Recall that Hillary Clinton was supposed to win the 2016 presidential election. All of the pols, polls, and pundits agreed on that point. She was a lock for the White House.

Nevertheless, Clinton faced a number of politically sticky issues. Most prominent of these was her use as Secretary of State of an unsecure private email server to transact official business.

Because this had unavoidably become a matter of public concern, the FBI conducted a Potemkin investigation of Clinton for possible violations of a criminal statute that makes it a felony for anyone lawfully possessing information pertaining to the national defense to allow it, through “gross negligence,” to be removed from its proper place of custody and disclosed.

In other words, under the statute, one need not intend to cause harm. As with a drunken driver who accidentally runs down a pedestrian, “gross negligence” alone was sufficient to warrant a felony charge.

In July 2016, when he announced the results of the investigation, Comey made it clear that Clinton had repeatedly and over a period of years stored, sent, and received “very sensitive, highly classified information” on her unclassified, nongovernment email server.

But although Comey conceded that Clinton was “extremely careless” in doing so, he nevertheless concluded that she should not be charged because there was no “clear evidence” that she “intended to violate laws governing the handling of classified information.”

So it was that, confronted by an insurmountable mountain of proof of Clinton’s grossly negligent and therefore felonious mishandling of classified information, Comey, with a straight face and without apparent embarrassment, raised an utterly irrelevant nonissue (lack of clear proof of intent) to give Clinton a pass.

This was the first overt sign that the FBI director had taken sides in the election and was doing his best to help Clinton’s candidacy and, he undoubtedly hoped, to become part of her administration.

Then things hit a snag. The NYPD was investigating former Congressman Anthony Weiner, husband to Clinton assistant Huma Abedin, for sexual solicitation of minors over the internet. Unfortunately for Clinton and Comey, the NYPD seized Weiner’s laptop computer and discovered on it thousands of classified State Department emails and documents.

The NYPD provided copies of those documents to the FBI. Faced with the possibility that the NYPD might disclose its findings, Comey reopened the FBI investigation.

In his auto-hagiography A Higher Loyalty, Comey states that “I believed that it was my duty to inform Congress that we were restarting the investigation. I would say as little as possible, but the FBI had to speak.”

Responding to subsequent fatuous claims that his announcement may have cost Clinton the election, Comey explains in his book that he might not have announced reopening the investigation if he had thought that Donald Trump had any chance of winning the election.

“It is entirely possible that, because I was making decisions in an environment where Hillary Clinton was sure to be the next president, my concern about making her an illegitimate president by concealing the restarted investigation bore greater weight than it would have if the election appeared closer or if Donald Trump were ahead in all polls.”

Despite the enormous amount of material provided by the NYPD, the restarted FBI investigation was wrapped up in a matter of days, and Clinton was exonerated for a second time. Comey had doubled his deposit in the Clinton favor bank.

While all of this was going on, the FBI and the Obama Justice Department were investigating the Trump campaign for possible ties to Russia. That investigation was based in substantial part on opposition research helpfully gathered and disseminated by the Clinton campaign.

Former British spy and FBI informant Christopher Steele, while working for Fusion GPS which was working on behalf of the Clinton campaign, gathered salacious rumors and unsubstantiated information regarding Trump’s purported antics with Moscow prostitutes and other topics that supposedly would make him subject to Russian blackmail and control.

In addition to providing that unsubstantiated information to the FBI, Steele and Fusion GPS fed it to the media.

Compiled in the eponymous “Steele dossier,” this baseless Clinton campaign opposition research and the related leaked media stories were used by the FBI during the campaign to obtain a warrant and three renewals from the Foreign Intelligence Surveillance Court to retrieve the electronically intercepted communications of Trump campaign consultant Carter Page.

These warrants continued through the campaign and extended after the election and encompassed not only Page’s communications but the identities and responding communications of all persons in contact with him.

At the same time, the FBI tasked an informant to insinuate himself with Page as well as Trump campaign advisers Sam Clovis and George Papadopoulos. As reported by the Wall Street Journal, this “longtime U.S. intelligence source” for the FBI and CIA met separately with Page, Clovis, and Papadopoulos and “offered to help with the campaign.”

The informant offered Papadopoulos a $3,000 honorarium to write a research paper and a paid trip to London. When he met with Papadopoulos, the informant quizzed him about his possible knowledge of Clinton’s emails which had allegedly been hacked by the Russians.

Despite the informant’s best efforts and the extensive FISA surveillance, no proof of Russian collusion by Trump or his campaign have surfaced. But make no mistake. The FBI tried its best to link Trump to Russia but failed.

Which brings us to election day 2016 when the unthinkable happened: Trump won.

Comey and his crew were in a world of trouble. They had played partisan presidential politics and their candidate had lost. All of their plans were dashed, and they now faced the disagreeable likelihood of being held to account by the incoming president. What to do?

But, as they pondered this question, their prospects dimmed further. On November 17, 2016, Admiral Mike Rogers, the Director of the National Security Agency, met with President-elect Trump in New York. While it is unknown what transpired at that meeting, the next day two things happened.

First, the Trump transition team vacated Trump Tower and moved to New Jersey. Was this because Rogers had warned Trump of ongoing FBI electronic surveillance of Trump Tower?

Second, the same day the transition team departed Trump Tower, the Washington Post reported on a recommendation by Director of National Security James Clapper to President Obama that Rogers be removed from office.

Noting that Rogers had “caused consternation at senior levels of the [Obama] administration” by meeting with Trump without notifying “superiors,” the Post article stated that the recommendation to remove him had been made in October 2016, well before his meeting with Trump. Why? What had he done?

We know now that in early 2016 Rogers had advised the Foreign Intelligence Surveillance Court of wholesale abuse of FISA powers by the FBI. This led to an internal investigation and a hearing before the FISC in October 2016.

Who were these private contractors? What, if any relation, did this illegal activity have with the FBI’s investigation of the Trump campaign?

While the answers to these critical questions are still unknown, the facts recited in the FISC opinion combined with Rogers’ unauthorized meeting with Trump and the Trump transition team’s prompt evacuation of Trump Tower raise the specter that, throughout the presidential campaign and after the election, the FBI’s widespread illegal abuse of FISA was aimed at Trump.

Thus, the Times’ claim that the FBI didn’t begin investigating Trump until he fired Comey is patently and demonstrably untrue. Comey’s FBI investigated Trump during the campaign even as it was meretriciously and repeatedly clearing Hillary Clinton of criminal charges.

But let’s accept for the sake of argument the Times’ claim that the Comey firing triggered the FBI investigation of Trump. Are we to believe that, rid of Comey, the FBI was then out of partisan politics? No, it was not.

With Comey gone, leadership of the FBI went to Deputy Director Andrew McCabe. In 2015, McCabe’s wife ran for Virginia State Senate with the political support of then Virginia Governor Terry McAuliffe. McAuliffe’s political action committee and the state Democratic party gave Jill McCabe financial and “in-kind” support of more than $650,000.

McAuliffe was and is a well-known Clinton insider and supporter. In fact, in June 2015, Hillary Clinton had been a featured speaker at a fundraiser for McAuliffe’s PAC, the same organization that had been so generous to McCabe’s wife’s campaign.

When his wife announced her candidacy, McCabe was the head of the FBI’s Washington Field Office. But by February 2016, he had risen to the rank of Deputy Director. In that capacity, he oversaw the Clinton email investigation until its very last days, when it had become clear that Comey was going to publicly grant Clinton absolution for her sins.

After Trump was elected and Comey was fired, McCabe did his part to undermine the new president by setting up Trump’s National Security Adviser, General Michael Flynn, for his fatal interview by Special Agent Peter Strzok.

According to Joe diGenova, former U.S. Attorney for the District of Columbia, McCabe was on a conference call when Flynn’s indictment for lying to the FBI was announced. McCabe reportedly cheered.

This recitation of FBI connivance and subversion is by no means all-inclusive. The list could go on, but you get the idea.

Contrary to the Times’story, Trump wasn’t targeted by the FBI because he fired Comey. While that may have spurred Comey’s crew to intensify their efforts to get Trump and may make for a good cover story, those efforts started almost the day he announced his candidacy for the presidency.

The Times would have us believe that Comey’s FBI was a pristine, nonpartisan guardian of the national interest alarmed by a perceived threat to national security posed by Trump.

In fact, under Comey and McCabe, the FBI was an active adjunct of the Democrat Party using its nearly unlimited investigative powers to make a massive in-kind contribution to the Clinton campaign. Comey, McCabe, and others in the FBI hierarchy acted, quite simply, as political operatives with badges.

That has been the real story from the very first. It is a story of a once proud law enforcement agency being prostituted by its corrupt leadership as they tried to advance their partisan political agenda by subverting the Constitution and a national election.

It is a vitally important story of an unprecedented national disgrace of historic proportions. But don’t hold your breath waiting for the New York Times or the mainstream media to tell it.

George Parry is a former federal and state prosecutor who practices law in Philadelphia. He is a regular contributor to the Philadelphia Inquirer.