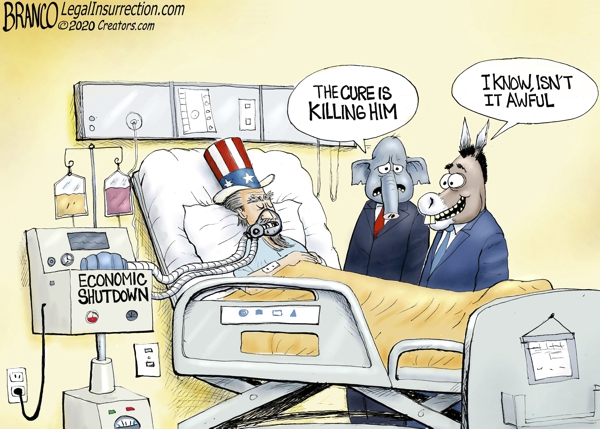 President Trump committed a “crime against humanity” when he expressed hope hydroxychloroquine plus azithromycin will prove to be an effective treatment for the Wuhan virus, said Ohio State Rep. Tavia Galonski (a Democrat, of course). 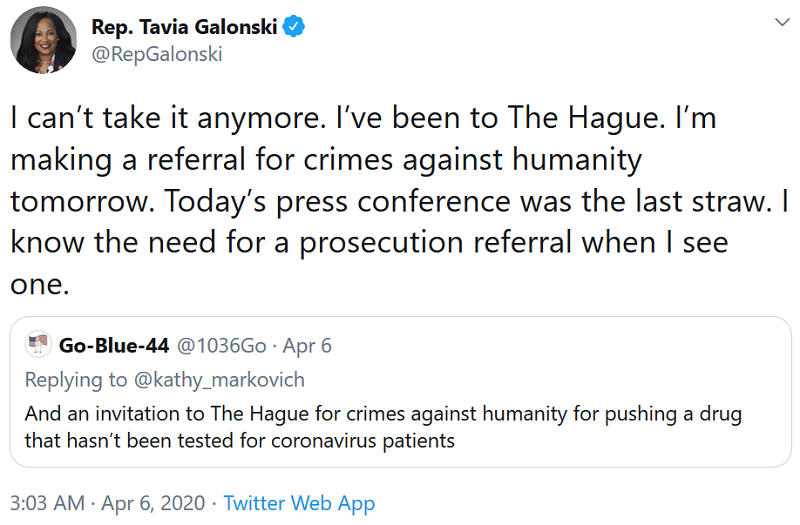 This reporter – who has the IQ of a kumquat — wants the president to shut down supermarkets, drugstores and other “essential services:”

“Whom the gods would destroy they first make mad,” said Prometheus in Longfellow’s poem “The Masque of Pandora.”

In Sophocles’ play Antigone, this is expressed as “evil appears as good in the minds of those whom God leads to destruction.”

Democrats and Fake Newsers want the panic over the pandemic to last as long as possible. If hydroxychloroquine cocktails are as effective as they appear to be — both as a cure and as a prophylactic – panic subsides.

So Dems and the Lying Swine fear monger, strive to suppress hope. If some who are dissuaded from taking hydroxychloroquine die, if the economy suffers massive damage from a shutdown based on wildly inaccurate computer models, that’s a small price to pay to defeat President Trump in November, they think.

But it’s a mistake for Fake Newsers to make it so obvious that this is what they think. Especially because millions who don’t ordinarily pay much attention to politics watch the daily White House news briefings.  Journalists have extraordinarily high regard for themselves, but lack self-awareness.

Those who tune in to the White House news briefings see the president give out lots of information, say nice things about just about everybody. Then they watch as the White House Press Corps ask snarky, stupid “gotcha” questions.

This does not enhance their popularity with Middle America.

“So far they’ve made every press conference about one thing: THEM,” said John W. Huber. “They can’t give Trump bashing gotcha a rest even during this cataclysm.”

Fake Newsers fight a losing battle, because in a week, maybe less, it’ll be clear to all but the most TDS-afflicted that hydroxychloroquine cocktaIls are a very effective treatment.

Fake Newsers know evidence soon will be overwhelming that hydroxychloroquine works. They’ve gone from accusing the president of “giving false hope” and “peddling snake oil” to claiming he promotes the drug because he might make some money from it.

(Through a mutual fund, Trump owns $99 worth of stock in Sanofi, one of many manufacturers of hydroxychloroquine.)

This could be because mitigation efforts are more effective than the modelers assumed, or because the assumptions the modelers made were badly flawed (garbage in, garbage out). Probably both.

This was the total new hospitalized for New York Monday (4/6). According to the Murray IMHE model, hospitalizations should be soaring. They’re plummeting. Here’s Bret Hume on NY Gov. Cuomo announcing a 75% drop in hospitalizations and ventilators in his state: 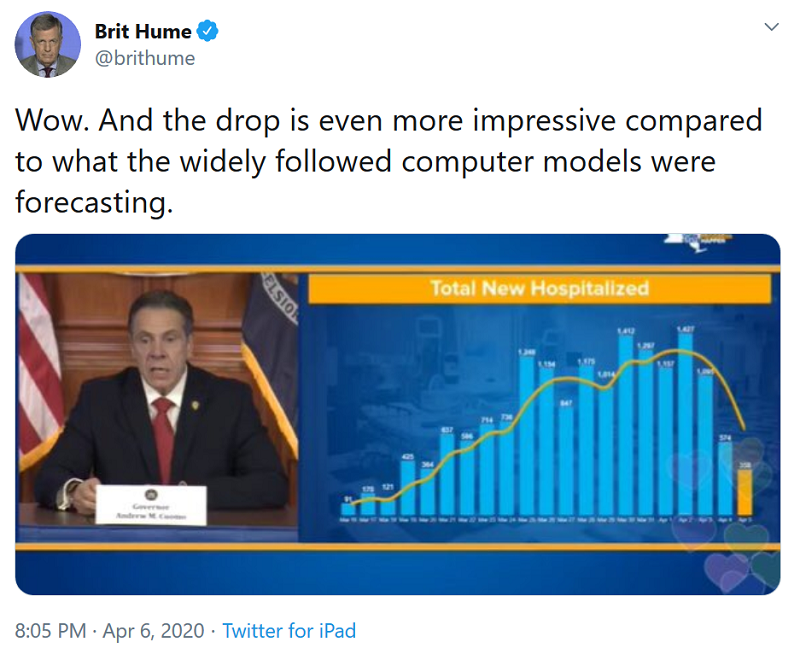 Sean Davis notes how far off the IMHE models for various “hot spot” states have been. The gulf between what the models predicted and what’s actually happening grows with each passing day.

“Less than 36 hours after it was re-configured and re-released, the IHME_UW model has blown up again,” Alex Berenson noted.

In a week or two, it should become clear we’ll have enough ventilators and PPE (personal protective equipment) to meet actual needs.

President Trump’s job approval slipped in this Rasmussen poll, presumably because otherwise healthy Americans are sick of being cooped up, worry that if the shutdown lasts for much longer, they won’t have a job to go back to.

When all and sundry know there is a cure for the Wuhan virus, and that the models grotesquely exaggerate the deadliness of it, the clamor for a return to normalcy will become a roar that will rock the nation.

Which is why I think that in a week or so the president will start to reopen the economy.

“President Trump keeps hinting to all of you ‘this will be over sooner than you think,’” said Fiona Mikayes. “He can’t come out and explicitly tell you he’s going to end things before April 30 because we have to get over this rough week first, but he knows that after the next 7 or so days, it will be time.”

Because Democrats and the Lying Swine oppose everything the president says or does, they’ll say Trump “has blood on his hands” for opening the economy too early. When they do that, they’ll take ownership of all the economic harm done by the shutdown.

“In the next few days, the President is going to free America,” predicts the Bookworm. “The Democrats will howl that he is a mass murderer, but Trump understands that they’d do the same thing if he continues on the current, America-killing track.”

Big things happening in the shadows could play hob with this timetable.

Odds are the Wuhan virus started in a biological weapons lab a few miles from the Wuhan wet market. Scuttlebutt is that to make a few extra yuan, a researcher at the Wuhan Institute of Virology sold lab animals in the market when he was done experimenting on them.

But there’s a non-trivial chance this was a deliberate biological weapons attack. Are we in a silent war with China? Who’s winning?

I was surprised when Gen. Mark Milley announced stepped up drug interdiction efforts off the coast of Venezuela. We don’t normally give the bad guys a heads up. Something else is going on here.

Followers of Q think Marines soon will rescue hundreds of women and children from the clutches of human traffickers.

Marines and sailors can be used for domestic law enforcement because Democrats didn’t include them when they passed the Posse Comitatus Act (1878).

A comment President Trump made Monday (4/6) suggests something is being done about human trafficking.

As Americans learn more about how badly the Wuhan virus has hurt us, and of Chinese duplicity in spreading it, they will view unkindly Fake Newsers who regurgitate Chinese propaganda verbatim.

If the Chinese attack was deliberate, these journos will come to be regarded as the Quislings they are.

Attacks on the President will intensify, but will be less credible.

Trump responded too slowly to the threat of the virus, Dems and the Lying Swine charge.

The trouble with that is Trump took decisive action weeks before any other world leader. Democrats and the MSM vociferously opposed the mitigation steps the president took when he took them.

Trump shut down air travel from China Jan. 29. As late as Jan. 23rd, the World Health Organization said there was no evidence of human-to-human infection outside China.

if Slow Joe Biden were president, flights from China would have continued into April, projections of a million or more deaths may have come true.

If the economy is liberated NLT (no later than) May 1st, there’ll be plenty of time before the election for the robust recovery President Trump envisions.

“Given the media’s horrific prognostications of mass death, and given the Left’s insistence that Donald Trump owns the nation’s reaction to the virus, if the U.S. dodges the viral bullet and ends up by midsummer with far less death, infections, hospitalizations and economic damage than predicted, then we know what follows: a boomerang that paints Trump as owning a miraculous recovery from what was once forecast as some sort of 1918 wipeout.”