When Senator Jon Kyl (R-AZ), chairman of the Senate Judiciary Subcommittee on Terrorism, Technology and Homeland Security, held a well-publicized hearing on a specific new type of terrorist threat last April, a lot of folks got scared. It turns out the threat is marginal. Instead of being called the EMP Terror, it should be called the EMP Annoyance.

EMP stands for Electro-Magnetic Pulse, caused by a nuclear bomb exploding not on or near the surface but high in the atmosphere. Kyl claims it’s the easiest way for America to be defeated by its enemies:

“A single Scud missile, launched from a freighter in international waters, carrying a single nuclear weapon detonating at the appropriate altitude, would interact with the Earth’s atmosphere, producing an electromagnetic pulse radiating down to the surface at the speed of light. Depending on the location and size of the blast, the effect would be to knock out already stressed power grids and other electrical systems across much or even all of the continental United States, for months if not years.”

Our dependence on computers and other electrical systems is, according to Senator Kyl, America’s “Achilles’ heel of vulnerability.” An EMP attack would have “irreversible effects on the country’s ability to support any large fraction of its present human population. Those who survived would find themselves transported back to the United States of the 1880s.”

He made these dire prognostications in a Washington Post editorial, Unready For This Attack.

I suppose this is what happens when politicians, well-meaning and patriotic (for let there be no doubt – John Kyl is one of the good guys on Capitol Hill) yet who know very little science get scared of a threat they don’t understand. (Again: Kyl is very bright – he was a Phi Beta Kappa in college and a smart lawyer – but he has no scientific background.)

His staffers also didn’t do their homework – for it turns out that there already has been an EMP attack on an American city, and nothing much happened.

In the 1950s and early 60s, the US military had a nuclear weapons test site on a tiny Pacific Ocean atoll 700 miles south of Hawaii called Johnston Island. As part of a program called Operation Dominic I, a test called Starfish Prime was conducted on July 9, 1962, with a Thor Delta rocket launched from the Johnston test site carrying a 1.45 megaton W-49 nuclear warhead. It was detonated at the ideal altitude for generating the most damaging EMP, 250 miles high in the upper atmosphere.

It was an experiment to see what such an EMP would do to the city of Honolulu (as well as military command and control installations).

The Starfish Prime scientists knew the pulse – which lasts 10 billionths of a second – is harmless to living things including people. What damage the pulse would cause to power grids was the question. Result? Street lights went out, burglar alarms rang, circuit breakers popped open in power lines all over Honolulu and other urban Hawaiian areas. An annoyance fixed within hours or days. No disaster.

The test was no secret. It was publicized as a “Rainbow Bomb” due to the spectacular auroral displays it would generate in the sky. Hotels on Waikiki held roof-top bomb-watching parties the night of the test. Here’s a description from an eyewitness, Dr. Cecil Coale, who worked on the project :

A brilliant white flash erased the darkness like a photoflash. Then the entire sky turned light green for about a second. In several more seconds, a deep red aurora, several moon diameters in size, formed where the blast had been. A white plasma jet came slowly out of the top of the red aurora and painted a white stripe across the sky from north to south in about one minute. A deep red aurora appeared at the south end of the white plasma jet. This visual display lasted for perhaps ten minutes before slowly fading. There was no sound at all. 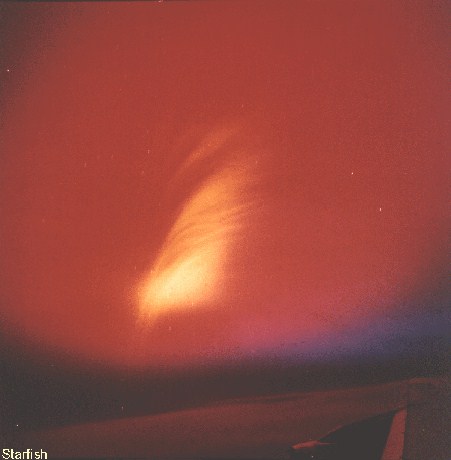 It turns out that the US and the Soviet Union conducted over twenty upper atmospheric nuclear tests to determine, among many other things, EMP effects. How could Kyl’s researchers not know this nor have it mentioned in his hearings? Especially because – better be sitting down – there’s a documentary film made about the Rainbow Bomb tests.

Made in 1999 by director Peter Kuran, narrated by William Shatner with music by the Moscow Symphony Orchestra, Nukes in Space: The Rainbow Bombs is available on DVD at Amazon. The New York Times wrote a review of it.

The ignorance of this is mind-shattering incompetence on the part of Kyl’s staff – and the “experts” who testified at his hearings.

The incompetence is compounded by failing to make a distinction between EMP effects of fission and fusion bombs. Starfish Prime was a thermonuclear explosion of a hydrogen fusion bomb (atoms fusing together). It was the equivalent of almost one and a half million tons of TNT. Only scientifically advanced nuclear powers like the US (and yes, Russia and China) have hydrogen fusion bombs. Building one is incredibly sophisticated and setting one off very hard to do.

This is what makes the alleged threat of a Nuclear Iran freighter-launching a nuke to EMP the Eastern Seaboard so ridiculous. The Mullahs are trying to build an atomic fission bomb (atoms splitting apart, like Little Boy/Fat Man at Hiroshima/Nagasaki) of between 15 to 30 kilotons – 50 to 100 times smaller than Starfish Prime which knocked out the street lights on Kalakaua Avenue for a few hours. All an Iran EMP attack would do to us is really tick us off.

The problem with Iran EMP scare-mongering such as Senator Kyl’s is misdirection: it focuses attention on a negligible problem and diverts attention from the real nuclear terrorist problem. This real threat is so easy to pull off (much easier than 9/11) and so potentially devastating to the American economy that it is flat-out amazing it hasn’t been done.

The only explanation (well, other than The Sword of Damocles ) is that the terrorists don’t understand the nature of America’s vulnerability to this threat. Sorry – I am not about to provide that understanding here. My friends I can trust on Capitol Hill in a personal conversation, yes, but not in print.

So let’s get back to EMP. The potential threat is not from Iran’s small atomic bombs but from a volley of China’s multi-megaton hydrogen bombs (up to 20 times as powerful as Starfish Prime, 1,000 times more than what Iran and North Korea are trying to make). This could be capable of causing a cascade of EMPs capable of serious damage to, say, the big transformers for interstate power lines which act like long antennas for an EMP. These need bigger and better circuit breakers and lightning arrestors.

Other alleged problems are far less worrisome. Fiber optic lines won’t be effected by EMPs, nor underground utility lines like in New York City, nor cell phones (although receiver/transmitter stations would need simple shielding like a metal Faraday box with metallic weather-stripping on the door gaskets), nor motors like refrigerator compressors with pounds of metal. A good surge suppressor will protect your computer.

Remember, this is the EMP threat of a full-on nuclear war with China in the distant future – not an immediate Iran or terrorist EMP threat, for there is no such thing.

Congress need not spend a dime on EMP protection of civilian infrastructure (rest assured the military is fully shielded). All it need do is allow the immediate full expensing of EMP-hardening costs by utilities (which also would protect against hyper-massive solar flares and lightning strikes), and the costs passed on to their customers without interference from state regulatory commissions. It will have to allocate funds to EMP-harden federal power facilities like at Hoover Dam and the TVA.

This simple legislative fix doesn’t require Senate hearings creating phony nightmares. It just requires politicians doing their job. Even in wartime that’s a tall order, especially when even the well-intentioned among them can’t resist the temptation to stand on a scary soapbox and cry nuclear wolf.