THE EMBARRASSMENT OF BIDEN 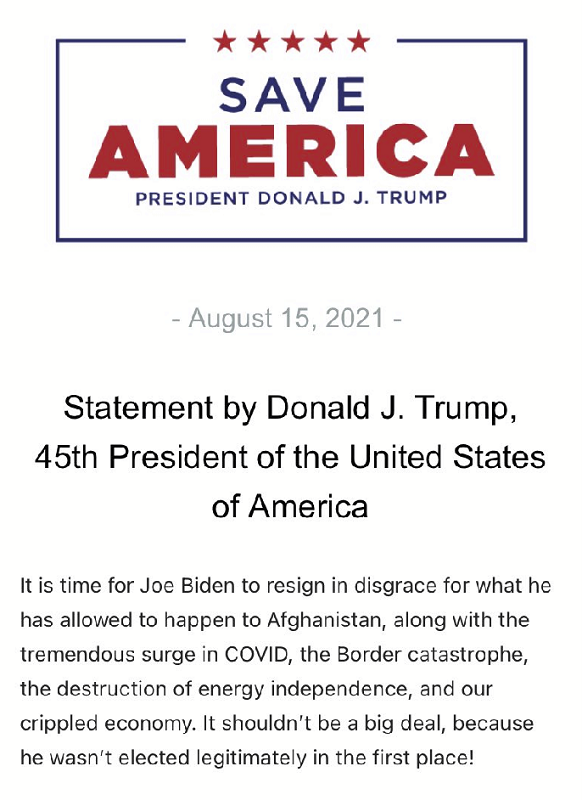 Although the White House had intended to keep Biden under wraps for as long as possible, the demand that he say something — anything — about the unfolding debacle in Afghanistan forced him to leave Camp David for a 20-minute statement, after which he refused to take any questions.

The important part of what he said boils down to one sentence: we had to leave, and everything that went wrong was Trump’s or the Afghans’ fault.

Biden is a craven coward, a feckless fool, a dismal dummy, and a man who will soon have more blood on his hands than a thousand Lady Macbeths.

Biden began by explaining that, after 20 years in Afghanistan, it was time to leave.  Few people would argue with that.  Whether they supported the war in the beginning or not, it had become clear to everyone that we had no clear mission there other than making money for the military-industrial complex about which Eisenhower warned us.  It was not in America’s interests to remain.

So we can skip that part of the speech.  It was a straw man, because Biden was defending a point with which no one disagrees.  You’re neither a brave nor principled man when you claim, “I stand with everyone else!”

What people wanted to hear was what Biden had to say about the abrupt American pullout from Afghanistan, one seemingly made without any forethought about the needs of the American civilians there or the Afghan troops, who, although they fought bravely, needed to feel that Americans were at their back.

Instead, we just left.  And that’s where Biden showed what a disgusting little weasel he is.

The first person at whom Biden pointed his finger was Trump, saying, effectively, he set me up!

“When I came into office, I inherited a deal that President Trump negotiated with the Taliban.  Under his agreement, U.S. forces would be out of Afghanistan by May 1, 2021 — just a little over three months after I took office.”

Setting up another straw man, and making himself look like a victim, Biden claimed he had only two choices: continue the withdrawal or stay in Afghanistan.  Forced by bitter circumstances, he chose the former.  And again, that glides right by the fact that the question isn’t whether the U.S. should have left; it’s how the U.S. left.

Having satisfied himself that he bravely dealt with the binary choice facing him (“I stand squarely behind my decision.  After 20 years, I’ve learned the hard way that there was never a good time to withdraw U.S. forces.”), Biden knew who’s really at fault here:

“So what’s happened?  Afghanistan political leaders gave up and fled the country.  The Afghan military collapsed, sometimes without trying to fight.”

Because these people are such losers, Joe says, he had to dump them:

“If anything, the developments of the past week reinforced that ending U.S. military involvement in Afghanistan now was the right decision. “

And then, like the stereotypical TV mother from a sitcom about the henpecked child, Biden added that we gave them everything and got nothing in return:

“We spent over a trillion dollars.  We trained and equipped an Afghan military force of some 300,000 strong — incredibly well equipped — a force larger in size than the militaries of many of our NATO allies.

We gave them every tool they could need.  We paid their salaries, provided for the maintenance of their air force — something the Taliban doesn’t have.  Taliban does not have an air force.  We provided close air support.

We gave them every chance to determine their own future.  What we could not provide them was the will to fight for that future.”

Biden also explained that Russia and China would have loved for America to stay there.  I don’t know about that.  China seems awfully glad to be in Afghanistan.  Moreover, we all know that, unlike even the Russians during the 1980s, China will have no compunction about being even more brutal to the Taliban than the Taliban are to everyone else.  Given Afghanistan’s rich mineral resources, if push comes to shove, it’ll be worth a little more Muslim genocide to China.

Biden spent some of the speech claiming that Americans are being safely evacuated, which is hard to believe given the increasingly panicky notices the Embassy posted on its website.

Contrast this weasel whining to a real president. Speaking with Miranda Devine at the New York Post, Donald Trump explained what he would have done:

We had all sorts of conditions[.] … All civilians were going to come out before the military. Everyone should have been out before they took our military out[.] … I was going to close this ridiculous embassy they spent a billion dollars on and move everybody out[.] …

I was going to blow up every military base [before we left]. I was going to take out every single piece of equipment. I said, ‘I don’t want anything left [apart from] leave each soldier a gun[.]’ …

Plus, I had a relationship with the Taliban where they knew they weren’t allowed to do this. They understood they were going to get hit very hard[.] … What I had was conversations with the [Taliban] leadership where I said, ‘If you do anything,’ we were going to hit them like they haven’t been hit before.”

At the end of the day, Joe was an embarrassment, and the Daily Mail, perhaps not surprisingly, summed it up best: 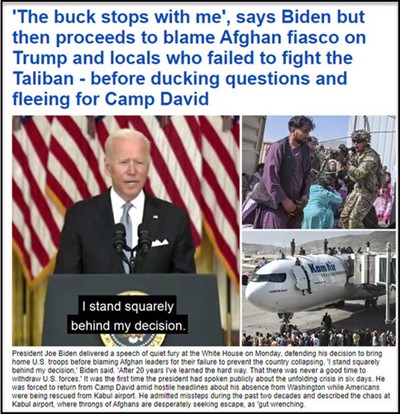 If Biden had any decency, he would follow Trump’s suggestion and resign.  Instead, he’s just going to keep gaslighting us.  Because he’s never had any decency and never will.