Many Biden watchers have long observed Jill Biden’s grasping obsession with becoming the First Lady.  Throughout the campaign as Joe Biden’s failing mental abilities became more and more obvious, did she love him enough to end it?  Oh no, not Jill.  She continued on with her elder abuse.

One explanation may be her long fascination with Edith Wilson – exemplified by dedicating her 2019 autobiography Where the Light Enters to: “The inspiring, groundbreaking First Lady Edith Wilson.”

She admired and apparently coveted the role that Mrs. Wilson filled after President Woodrow had a stroke in October 1919.  Edith Wilson hid the seriousness of her husband’s condition and took over the job of running the country until the end of his term in March 1921.

While Edith claimed only to be a “steward” of her husband’s presidency and that she took over with the full approval of his doctors, in truth she was quite a bit more controlling than she said.  Consider this passage from the Edith Wilson Wikipedia page:

“Edith took her role very seriously, even successfully pushing for the removal of Secretary of State Robert Lansing after he conducted a series of Cabinet meetings without the President (or Edith herself) present. She also refused to allow the British ambassador, Edward Grey, an opportunity to present his credentials to the president unless Grey dismissed an aide who was known to have made demeaning comments about her. She assisted President Wilson in filling out paperwork, and would often add new notes or suggestions. She was made privy to classified information, and was entrusted with the responsibility of encoding and decoding encrypted messages.”

Woodrow Wilson had his first stroke at age 39 in 1895 which left him with weakness in his right arm and hand.  He had several more minor strokes but recovered, though it took a year before he was able to use his hand to write.  In 1912 he suffered from several more Transient Ischemic Attacks (TIAs).

A month after his inauguration he experienced yet another neurological episode which left his left arm and hand weakened.  His brain was being damaged by cerebral vascular disease. He continued to suffer from painful headaches and high blood pressure.  This was all hidden from the public who elected him to a second term in 1916.

Perhaps this medical history explains Wilson’s overt racism, a form of mental illness.  Edwin Weinstein, a professor of neurology wrote a book about Wilson:  Woodrow Wilson:  A Medical and Psychological Biography.  He noted Wilson’s increased paranoid and suspicious nature; after the strokes, he became more secretive, more egocentric.  Sound familiar?

Joe Biden had two aneurysms when he was 45.  He underwent two surgeries, one in February, one in May of 1988. He has also undergone plastic surgery on his face and a hair transplant on his scalp.  That’s a lot of anesthesia and invasive procedures above the neck for one man.  Is it any wonder he is losing his grip on reality?  And if anyone has been painfully aware of his decline it is Jill Biden.

Why on earth did she not put an end to his campaign?  Perhaps because she planned or hoped to reprise Edith Wilson’s role when the time came.  Nothing else explains her stubborn and cruel dedication to Joe’s presidential aspirations.  Did she look forward to following in the footsteps of Edith Wilson?

What if it was Jill who urged Joe to overrule the military brass about fleeing Afghanistan in the middle of the night and insisted that he give the order that even Joe would not have given if he had been sentient?

The Dunning-Kreuger effect is a “cognitive bias in which people wrongly overestimate their knowledge or ability in a specific area. This tends to occur because a lack of self-awareness prevents them from accurately assessing their own skills.”  Is not that a perfect analysis of not-a-doctor Dr. Jill?

If the Biden presidency were a TV movie-of-the-week, couldn’t we all see her pushing her poor husband who is slipping into dementia to be her placeholder until she can effectively take over his job?  This would explain Biden’s repudiation of the advice given by Milley, Austin, and McKenzie, if what they have testified is true, that they each advised leaving at least 2,500 troops in Afghanistan.

Dr. Jill, like Joe, wanted a big, heroic speech for the 20th-anniversary memorial for 9/11, and Jill, having exactly zero military expertise but believing in her own superior intelligence, might have either insisted Joe order the thoroughly untimely withdrawal or she conveyed it to them herself in his name as the Edith Wilson of this administration.

In July 2020 Stephen Kruiser wrote a column titled “Jill Biden Wants to Trash Her Husband’s Dignity to be Edith Wilson 2.0 positing the notion that it was Jill running for President.  He followed up in June 2021, reiterating his belief that Jill Biden’s Edith Wilson moment had arrived.

Given the tragedies that have accompanied the abandonment of Afghanistan, Generals Milley, Austin and McKenzie cannot be excused for following orders the consequences of which they knew would be grievous.

Is not one of them familiar with the Nuremberg Defense?   Following orders do not confer innocence but may lessen punishment.  These three generals should all be forced to resign, no matter who gave the order to abandon Bagram and Afghanistan to the Taliban.

Instead, as we saw in two days of testimony in the Senate and House, not one of the three will accept responsibility for the tragic outcome of their actions.

Did they suspect those orders might have come from Jill given Joe’s impairment?  Would they, under those possible circumstances, carry out such a catastrophic plan doomed to failure and death?

Just speculating here but given Jill’s aggressive ambition to live in the White House and her admiration for Edith Wilson, especially given her carefully planned photo-op at the Presidential desk on Air Force One awhile back, one has to wonder. 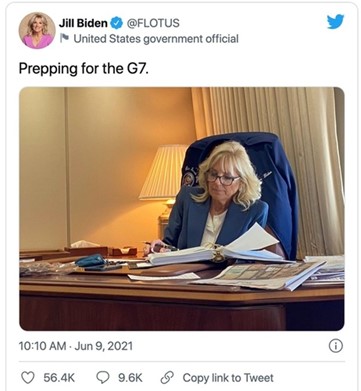 Jill Biden must be well aware of how her family has achieved their massive wealth.  She must feel some level of gratitude to China for much of it thanks to her husband’s and stepson’s many illicit “deals” made with that country.  Then there are the anonymous Chinese millions given to the Biden Center at the University of Pennsylvania.  See Miranda Devine’s book, Laptop from Hell.

With the withdrawal from Afghanistan, Biden has handed China potentially trillions of dollars of mineral wealth.  Joe and Jill’s grifter ways of saying thank you?

We won’t know the answers to what precipitated the most ruinous foreign policy blunder in US history for years to come, but one day the truth will become known.  Chances are though that Jill had much to do with making it happen for it is she who controls Joe.  It is likely that he would listen to her over anyone else.

It will be years before there is full knowledge of the horrific damage done by this administration both domestically and on the world stage.  When that happens, history will place much of the blame on the woman who was an Edith Wilson wannabe.