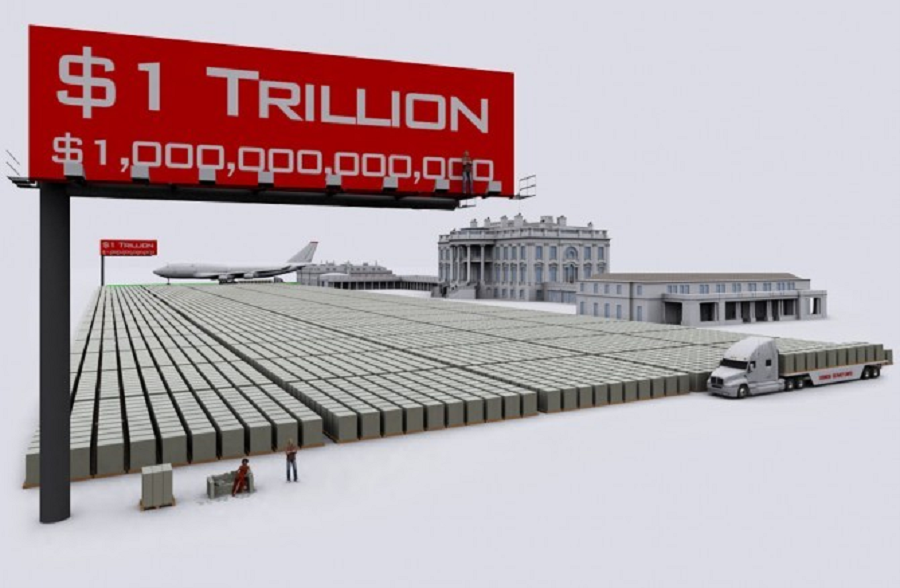 A specter is haunting the Democrat Party — the specter of inflation.

Inflation is an insidious tax that robs the poor and the middle class. It favors the U.S. government, the world’s biggest debtor, because the government expects to pay back its creditors in Monopoly money. It crushes the real earnings of the vast majority of American households and destroys their savings.

That’s what the Democrats are up to. And that’s what might bring them down–just as 12% inflation brought down Jimmy Carter in 1980.

It’s time for Republicans to cry “Thief!” and hold that Masked Man in the White House to account for the disaster that has already begun to befall America.

Alexis de Tocqueville warned us nearly two centuries ago that democracies fail when people decide to vote themselves rich.

Biden’s $1.9 trillion “stimulus” package and his proposed $2.3 trillion bribes to Democrat constituencies masquerading as infrastructure are exactly what de Tocqueville warned about.

With a federal borrowing requirement around 15% of national income financed mainly by Federal Reserve purchases of Treasury debt, the U.S. is headed for a disaster. This is too much even for Obama’s Treasury Secretary Larry Summers, who warned last week that inflation indicators are flashing a red alarm.

This is a Ponzi scheme, not an economic policy. Throwing massive amounts of cash out the helicopter window while throttling investment (by raising corporate income tax and capital gains tax rates) gets exactly one result, and that is inflation.

Inflation robs the poor, who have nowhere to go but the checkout counter, and favors the rich, who can buy inflation hedges.

The Biden administration is playing Robin Hood, robbing the poor and the middle class. It goes without saying that the worst victims of inflation are minorities.

This could be the issue that brings down the Democrat Party.

Home prices have jumped 12% over the past year as pension funds, foreign investors, and wealthier Americans pour money into homes as an inflation hedge. Rents have ticked up, too, as the Wall Street Journal reported on April 21.

Heaven help the family of modest means whose aging car breaks down. Used car wholesale prices have jumped 41% during the past year, and new car production has fallen by a quarter between the last quarter of 2020 and the first quarter of 2021. Dealer new car inventories are the lowest in history, barely a third of their normal level. 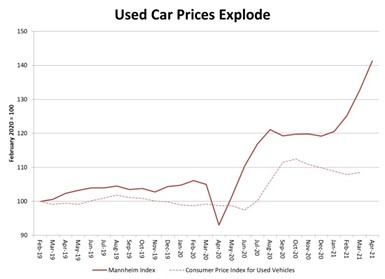 Oil prices have recovered, but oil drilling rigs in operation in the U.S. are at an all time low. That’s one reason why gas prices are skyrocketing. Oil and gas drillers can’t get financing because the regulatory environment has suddenly turned hostile to anything with carbon. Without financing, they can’t drill.

The U.S. produces less oil, and prices go up. Some conservatives blame higher oil prices on Biden’s cancelation of the Keystone pipeline. That’s only a small part of the picture: It’s not just a pipeline, but also the collapse of investment in oil drilling in the United States in general.

You’ve seen it yourself at the pump.  Here’s AAA’s average price per gallon by state today (4/27).  It’s going to keep rising.

The cost of inputs to production is rising at the fastest level on record, according to surveys by several of the Federal Reserve’s regional banks. That translates into higher cost of goods for the end user.

According to a Fortune Magazine analysis, only 7% of the proposed $2.3 trillion “infrastructure” package actually would go to infrastructure. If you throw in funding for high-speed internet, wastewater management and so forth, infrastructure amounts to less than a quarter of the total bill.

Meaning 1 trillion 700 billion dollars of this crooked corrupt Democrat rip-off goes straight to Democrat constituencies, politicians, and rich elite.  That’s over 2/3 more than the simulation on one trillion above.

This is a pathological fraud, a scam, a Ponzi scheme, an astronomical act of embezzlement, whose goal is to pick the pockets of Americans, and their savings. But will the Republicans put an end to it?

Above, I said they should call Biden “Thief!” now.  Problem is, they should have said that to him the morning after the election last November.  How many of them did then?  How many will now?

David P. Goldman is renowned as “Spengler” online; he is the author of How Civilizations Die: (And Why Islam Is Dying Too).