THE DEMOCRATS’ TWIN ALBATROSSES OF PELOSI AND BIDEN 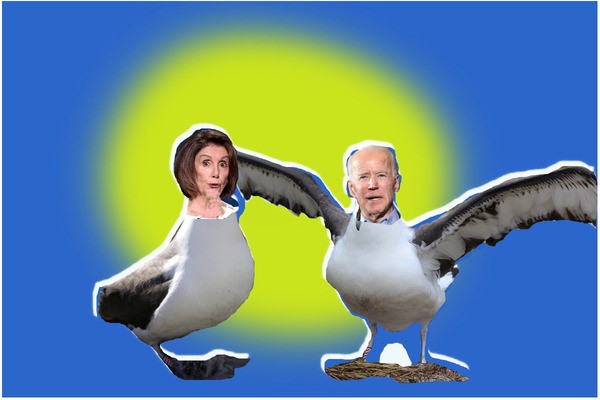 One has to wonder, do those on the left, including the media, actually think Joe Biden is a viable candidate for president?

Do they not realize that Nancy Pelosi is as senile as Joe?  Like Joe, she often slurs her words, suffers brain freezes mid-sentence, and spews gibberish.  The President was simply saying yesterday (5/19) what everyone can see, that “Pelosi is a sick woman. She’s got a lot of problems, a lot of mental problems.”

Biden is a lifelong corruptocrat, a known plagiarist, a pathological liar, and a truly mean and evil man.  You can catch a glimpse of just how mean in the film about Clarence Thomas; it was Biden who grilled him mercilessly during the hearings over Anita Hill’s phony allegations.

Biden is a racist as well.  Pelosi is a lifelong power-mad lunatic.  She has allowed her own district to dissolve into a homeless camp with all the attendant problems — discarded needles, feces on the streets and sidewalks, and an ever-escalating crime wave.  Smash-and-grab car burglaries occur by the minute in San Francisco, and there are no consequences for the perpetrators if caught.

Like Sen. Dianne Feinstein, Pelosi and her husband are millionaires several times over; they’ve become rich because both have been in Congress for so many years.  They all get rich on insider information.  Joe Biden goes farther; we all know he used a billion dollars in U.S. aid as leverage to get a Ukrainian prosecutor fired because he was investigating his son.  John Kerry was in on that bit of bribery.  He is as low a form of life as Biden.

And yet, at the moment, Biden is their candidate, and Pelosi is their speaker, who embarrasses herself every time she opens her mouth, as does Biden.  Both of them belong in a long-term care facility for the aged.

That the Democrats consider either of these pols a credit to their party is proof of their willful blindness.  Why do they not see what everyone outside of their party can see?  That these two people are way past their sell-by date.

How is Joe going to debate President Trump?  He is unable to utter a coherent sentence or answer a simple question.  Pelosi submitted a $3-trillion spending bill that is simply a joke.  Biden has vowed to pick a woman as his running mate.  Woe be unto him if he doesn’t.

As for the left’s “believe all women” mantra, that went out the window the moment Tara Reade accused Biden of sexual assault.

Reade’s allegations are infinitely more credible than Christine Blasey Ford’s fabricated accusations against a high school–aged Brett Kavanaugh, but Democrats are so self-unaware that they don’t recognize their own gross hypocrisy.  This time, Reade is “making it up.”  See Ami Horowitz’s recent video.

Blasey Ford most likely never met Justice Kavanaugh.  Reade did work in Biden’s office, did report his behavior and tell others at the time.  But the Dems believed Blasey Ford and don’t believe Reade.  Go figure.  Denial is a dangerous and mystifying psychological defense mechanism, and the Democrat party is in denial about the mental capacity of its two most prominent “leaders.”

Donald Trump has warned our federal government about the dangers China represents to the U.S. since the 1980s.  He was right, and since he took office, he has tried to rectify the horrific trade imbalance.  No one can refute the fact that China purposely unleashed the COVID virus upon the world, but Nancy Pelosi calls Trump’s focus on China “a diversion.”

Is she really that clueless?  Probably not, but destroying Trump is far more important to her than protecting America.  Her comments about Trump’s use of hydroxychloroquine as a prophylactic are outrageous.  It is the most effective drug at the moment, used all over the world.  And Trump is not “morbidly obese.”

She, however, is morbidly botoxed and has undergone so much plastic surgery that she resembles a character from the film Death Becomes Her.

She is a ghoul in every sense of the word, but the left seems not to realize it.  Leftists celebrate how she wields her power.  That is what they admire; it’s the only thing they admire in anyone.  They just cannot abide it in a Republican, especially when they were so certain that Hillary was going to win the 2016 election and they would all be in fat city.  They would have been all-powerful.  They would have had control of all the levers of power in this country.

And being the spoiled children they are, to this day, they cannot accept that defeat, especially to an outsider like Trump.  They love to mock him, to call him stupid, but he has them all by the short hairs and runs rings around their collective body of NeverTrumps.

To be sure, Biden and Pelosi have their devoted fans who are so blinded by their hatred of Trump and their thoroughly unwarranted hero-worship of Biden and Pelosi that they mistakenly think they are normal and healthy but both are seriously in need of an intervention.

Why Jill Biden allows Joe’s candidacy to continue is a cruelty, a form of elder abuse. As for Pelosi, where are her five kids telling her it is time to retire? Of course the lady of iron will would refuse but how much longer can her infirmities be on public display?

Only time will tell but it seems pretty likely Trump has the election in the bag. Biden is the weakest candidate the Democrat party has run since George McGovern and McGovern was a decent man; Biden is not.

As for Pelosi, her district is so damaged, so depressed, they will likely re-elect her and keep her in office until she is 100% wax-ready for Madame Tussaud’s.