THE DEMOCRATS’ STORMTROOPERS OF BLM/ANTIFA 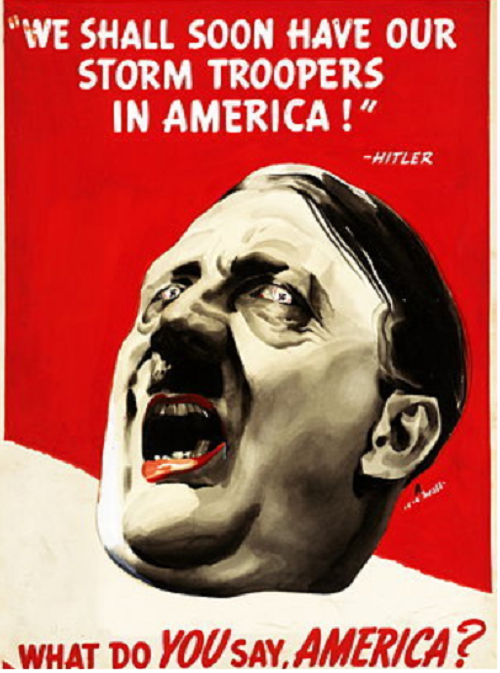 The Sturmabteilung or Stormtroopers were Hitler’s Brownshirts, civilian thugs whose job was to beat up anyone who was against the Nazis.  That’s what BLM/Antifa has become for the Democrat Party.

And now, when the tactics of Black Lives Matter coincide with the ideology of NPR (taxpayer-funded National Public Radio), Americans should realize that the Democrats have crossed yet another line on the indecency scale.

A reporter for an NPR station showed up at the Los Angeles hospital where two sheriff’s deputies who had just been shot while sitting in their car were taken. A BLM crowd had miraculously appeared within minutes to block the emergency entrance, some of them shouting “I hope they f—— die.”

Some were vowing to “rape a cop’s girlfriend like a dog instead of a pig.”  The NPR station’s reporter allegedly interfered with the police attempts to control the “protesters.”

This is the nadir to which the radicalized Democrat party has brought this nation as the election nears.  Can it get worse?  Most assuredly.  These pathetic lefties are on a roll, with a new “bombshell” (not) just about each and every day.

The Atlantic apparently made up a story out of whole cloth about the President disrespecting soldiers who gave their lives in battle.  It was just another fabricated lie, but it kept CNN and MSNBC delirious with excitement for a few days.

Until, that is, a few quotes from Bob Woodward’s new book gave them, they assumed, a new scandal — Trump “played down” the seriousness of COVID to prevent a panic!  OMG!  This one was blessedly gone in a day because of course a president in a crisis hopes to allay fear and panic.

It is the Democrats who have used and abused the virus as a cudgel in yet another foolish attempt to destroy Trump.  At the same time, they blindly defend and promote poor decrepit Joe Biden, who cannot successfully read a teleprompter any longer, let alone discuss policy, any policy.  He can barely utter a coherent sentence.  Anyone who denies this has not watched the many, many videos of him trying to sound presidential and failing miserably.

Not surprisingly, taxpayer-funded NPR has supported the not “peaceful protests” for months.  They have been touting that ludicrous book that defends looting and the destruction of private property.  They regularly use Trump’s words out of context.  NPR lost its way long before Trump was elected, but it has been enthusiastically dragged into the anti-Trump fray.

Why taxpayers are forced to subsidize this particular branch of the Democrat party is not a mystery; taxpayers are stooges.  Throughout these past months of violent looting, arson, death, and destruction, NPR, like the rest of the Democrat media, has misled their viewers and insisted these riots were “mostly peaceful.”  They absolutely were not.  They have caused hundreds of millions of dollars in damage, mostly to small businesses, many of them minority-owned.

The left media rarely if ever showed their viewers the hundreds of hours of video of the devastation caused by Antifa and Black Lives Matter throughout the nation.  (Nor do they show the countless videos of Biden’s obvious senility.)

They have denied throughout the wholesale evil perpetrated by adherents to these Marxist groups, both of which are generously funded by American corporations like Airbnb, Door Dash, Ford Foundation, and George Soros’s Open Society.

Are these big donors aware that Antifa and BLM mean to destroy capitalism, the nuclear family, and America as founded?  Of course they are.  They are all on board with those groups’ anti-Americanism.

The street level and media dominance of these two organizations are, one can suppose, the natural outgrowth of two generations of educational indoctrination by the Alinskyite left.

Hillary Clinton did her undergraduate thesis on Saul Alinsky, so that should give us all an idea of how long the Democrats have been driving us to where we are today, with every tradition and American value long revered and passed on to our children for over two hundred years with the Constitution under assault.

The continued murderous attacks on our men and women of law enforcement has been for several years now encouraged by the left.  Remember Dallas and the five policemen killed by one cold-blooded, cop-hating sniper there to the tune of “Pigs in a blanket, fry ’em like bacon”?  Those doing the chanting supported the sniper.

The Democrat’s antipathy for our police has long been on display.  That would be the same brand of man and woman who saved thousands on 9/11.  And yet just in the past few months, Pelosi, Maxine Waters, Ayanna Pressley, Kamala Harris, and Biden himself have seemed to promote “uprisings in the streets.”

They seem to think it will benefit their party on Election Day.  If it does, even with the cheating the Democrat party is bound to put in play, then America will soon be over.

The Democrat party of today is authoritarian, socialist/communist, racist, anti-capitalist, anti-wealth for everyone but themselves, and hypocritical in the extreme.  What these people want, what they take, is for them and for them only.  The rest of us must learn our place and not strive for what they deem the status, wealth and power reserved for them, that must remain out of our reach.

The Democrats of blue states have used the pandemic to their own ends – to destroy their states’ middle class by putting as many small businesses out of business as possible. DeBlasio and Cuomo of NY, Newsom of CA, Whitmer of MI, etc. are each happy to betray their own citizens if it means beating Trump in November.

The Democrats in Congress continue to block further aid to the catastrophically unemployed due to the virus. As usual, Pelosi and her vassals in the House are abusing their positions of power, again in some demented logic to defeat the President.

With every fiber of their being, they believe most Americans are mind-numbed idiots. They are counting on it, counting on us to ignore the fact that they have been advocating for all the rioting the citizens of democrat-run cities have endured. They assume as well that we will all fail to notice their candidate belongs in a nursing home.

The Biden campaign finally released a statement, too little, too late, in support of law enforcement! Harris however is still raising money to bail out rioters. Ilhan Omar said on Saturday that “You can’t vote Democrat if you support the police.” As a spokesperson for The Squad, that pretty much says it all you need to know about the Democrat party as currently constituted.

As Gary Gindler writes, they seem to be following in the footsteps of some very bad tyrants of history:

“Minister Goering’s first step was staging a grand purge of the police and hiring National Socialist Party activists with no police experience to replace the thousands of dismissed policemen. How could the head of police practically leave citizens to their fate without police protection? This seems more than strange, but Goering had a different task.”

Given the enthusiasm of Trump’s supporters, the Democrats’ game plan will be a bust. More from the Gindler piece:

Contrary to what the aged Pelosi has said, it is the Democrat party that is the enemy of our country, and a very serious, lethal enemy at that.