THE COUNTRY THAT DOESN’T EXIST

Want to come with me to the country that doesn’t exist?  Plan to pack your bags this coming February.

Imagine a Moslem country that is a real democracy, pro-America, pro-free market, despises Islamist ideology and terrorism, and lies athwart one of the world’s most critical chokepoints in global shipping and trade.

The US State Department would leap at the chance to support such a country, right?  You are probably cynically shaking your head no – but it’s much worse than that.  Our government refuses to recognize the country’s existence.  In fact, no government or international organization in the world does – yet is has been sovereign and independent since 1991.

With no help or recognition from anyone, this country has managed to survive – and survive as a capitalist Moslem terrorist-free democracy – for nearly 20 years.  This is a heroic achievement – and unknown to most everyone on the planet.

We are talking about Somaliland – the Country That Doesn’t Exist. 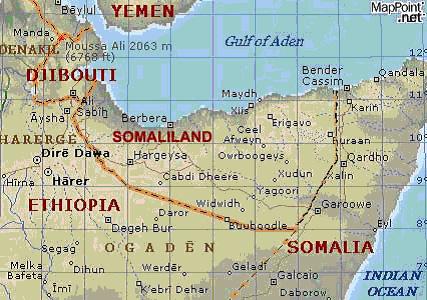 But it does exist.  On just about any other map of Africa but this one, you’ll see the country of Somalia, shaped like a giant number 7, all in one piece.   All those other maps are lies.  There is no such country as "Somalia."  There is just a region of Stone Age Moslem anarchic barbarity and piracy.  There is, however, such a country as Somaliland.

Most of Africa’s 50 countries were created by European colonial powers, who divided the strategic Horn of Africa at the entrance to the Red Sea into three colonies:

France let Djibouti become independent in 1977.  The Brits (who got Italian Somalia after WWII) forced British and Italian Somalia into a shotgun marriage in 1960.  This lasted until 1969, when the Soviet KGB sponsored a coup led by army commander Mohammed Siad Barre.

Under Barre’s military communist dictatorship, the Soviets established a major naval and submarine base in Berbera controlling the mouth of the Red Sea.  But Berbera was in former British Somalia, where a serious anti-communist rebellion was emerging.

By 1988, a full-scale civil war had broken out, with the inhabitants of former British Somalia demanding their own country which they called Somaliland.  It was horrifically suppressed by Barre and his Soviet supporters, resulting in wholesale destruction of towns and villages by aerial bombing, and the slaughter of more than 20,000 Somalilanders.

Finally, the collapse of the Soviet Union and collapse of Soviet support resulted in the overthrow of Barre in 1991 by a collection of Somali warlords as Somali disintegrated into anarchic chaos – except Somaliland.

Since 1991, Somaliland has been a well-governed peaceful de facto independent country.  It is a Black African moderate Moslem nation that protects women’s rights, wants to help in the war on Islamic terrorism, is building democratic and free market institutions, and wants to be an ally of America’s.  Plus it’s in a vitally strategic location.

Yet we won’t recognize it’s existence.  Not just Zero, neither Bush II, Clinton, nor Bush I would say this ideal ally exists.  All pretend that it doesn’t and Somalia does.  It’s absolutely perverse.

I want to go there, to see and learn for myself, to try to answer the mystery.  Want to come with me?

The way to get to Somaliland’s capital of Hargeisa (also spelled Hargeysa) is a 45 minute flight from Djibouti.  So we start in Djibouti – to which there are non-stop flights from Paris, Frankfurt, Dubai, Nairobi, and Addis Ababa, Ethiopia.

Djibouti is a tiny country but fascinating in its own right, so we’ll spend a couple of days there visiting Lake Abbe with landscape so surreal the original Planet of the Apes movie was filmed there, and snorkeling with whale sharks (they’re harmless but thrillingly huge).  We’ll stay in the ultra-luxurious 5-star Kempinksi Palace Hotel.

After a briefing at the US Military Africa Command center in Djibouti, it’s off to Hargeisa, meeting with a number of Somaliland leaders and officials.  We visit Berbera, and on the way visit the extraordinary archaeological site of paleolithic art, Las Geel.

We’ll find Somaliland to be a peaceful, safe, and bustlingly busy place, with friendly people overjoyed to see us.  We’ll have an extraordinarily memorable experience, and when we return, we’ll want to do whatever we can to help Somaliland be recognized by the world.

I can only bring 10 folks with me.  If you’d like to be one of them, let me know:  [email protected]. Hope to see you in Djibouti….