THE CHINA VIRUS HAS TO CAUSE THE GOVERNMENT TO SHRINK 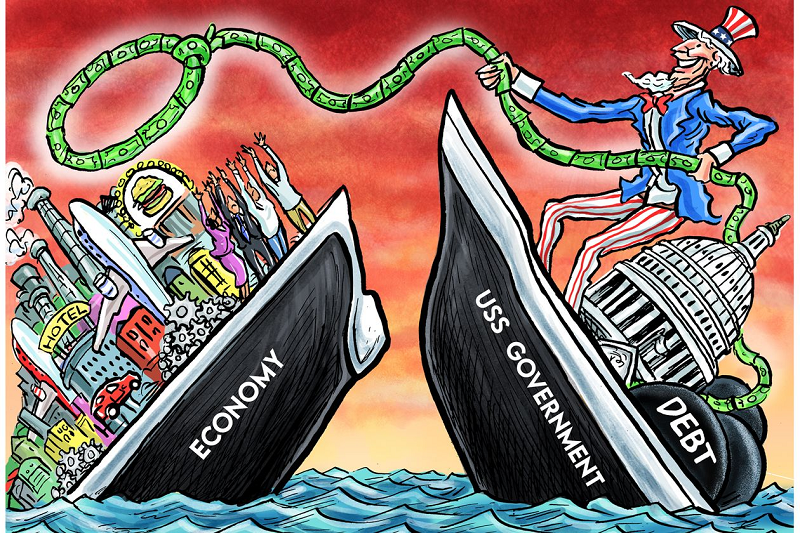 In the response to the coronavirus pandemic, leftists see a model for the future.

“Not only will America need a massive dose of big government to get out of this crisis,” one wrote, “but we will need big, and wise, government more than ever in its aftermath.” As a conservative, I’m going to argue the opposite.

What has happened in this crisis so far is not an indicator of the future. A new era of big government in the economy is unlikely, undesirable and far from inevitable.

Yes, government intervention in the economy today is without precedent. In early April, the International Monetary Fund estimated that fiscal actions around the world totaled some $3.3 trillion—more than 50% greater than all the stimulus spending of the global financial crisis—with another $4.5 trillion in loans and contingent liabilities.

Those numbers have only grown, with leaders making daily television appearances to roll out wheelbarrows more money. Most media lavish praise on governments for these actions.

So why doesn’t this herald a new age of big government? It’s simple: All this intervention has been economically ruinous.

No amount of money can fully compensate for social-distancing actions whose effect is to shut down large segments of the economy. Tens of millions have lost jobs, and many thousands have lost businesses. In most cases, compensation from the state is a fraction of what they were earning.

Many of the measures were [but no longer] necessary to combat Covid-19, although we will be able to evaluate them with any certainty only after the crisis. Yet there’s no doubt that the economic damage is staggering.

Anecdotal data suggest that drops in global gross domestic product exceed in scale and speed what happened in the 1930s. The underlying assumption—that the economy can be restarted later as quickly as an idle automobile—is dubious.

As focus shifts from the pandemic to the economy, it will need to shift from a lot more government action to a lot less. People turn to government for security. Conservatives understand that security is fundamental to why government exists. Right now, as in wartime, we face extreme needs for physical and financial security.

But as needs shift to jobs, growth and wealth creation—and those needs will be enormous—it will require more market activity and a bigger private sector, not more intervention and bigger government.

There is another reason to expect a shift to less government: Public-sector balance sheets will be an unholy mess. Even before this crisis, public debt levels were dangerously high. The IMF estimated that 2019 concluded with a global public debt-to-GDP ratio of 83%, amounting to a total indebtedness of about $70 trillion.

With emergency spending adding to the numerator and declining output subtracting from the denominator, that ratio will soar. And that is before many of the tax deferrals, loans and contingent liabilities invariably end up as additional debt on government financial statements.

“Modern monetary theorists” will prattle on about how with low interest rates and monetary expansion this does not matter. Their core belief—that governments can never really run out of money—is nonsensical. Mexico faced default in the 1990s, and Canada came close. The global financial crisis resulted in multiple sovereign debt crises a decade ago.

This time will probably be much worse.

Governments began this episode with poorer balance sheets, and central-bank actions effectively nationalized much corporate debt. Unless we experience a period of astronomical global growth, simple arithmetic dictates that many governments, both national and subnational, will experience debt crises or at least severe pressures, in the years to come. If they fail to practice mild austerity proactively, a brutal kind will be thrust on them.

One lesson from 2008-09 is that a crisis, as bad as it seems at the time, is actually the easy part for those in public office. In the short term, spending initiatives or tax breaks are always popular, especially when the public wants to see quick action. The inevitable spending cuts and tax hikes later—even those that end temporary measures—will encounter serious resistance.

Despite the unsustainable nature of today’s spending, opposition this time may even be stronger. Many workers have been reduced to limited stipends by government-ordered shutdowns, leading to renewed calls for a “guaranteed minimum income.” And that’s the lesser problem.

Those laid off in public institutions have generally received full pay. Their experience of a guaranteed maximum income will feed the delusion that current economic and fiscal management is somehow viable.

Because the choices of electorates and the decisions of leaders will matter, I make no “inevitability” claim for my argument, except in a contingent sense.

Governments that resist restoring free enterprise and fiscal responsibility will experience recession and stagnation. Those that do the right things will lead their countries to a far more prosperous future.

Stephen Harper was Canada’s prime minister, 2006-15, and is chairman of the International Democratic Union, a global organization of center-right political parties.