2 The Point News » Guest Authors » Members Only » THE BURDEN OF PROOF IS ON BIDEN, NOT TRUMP

THE BURDEN OF PROOF IS ON BIDEN, NOT TRUMP 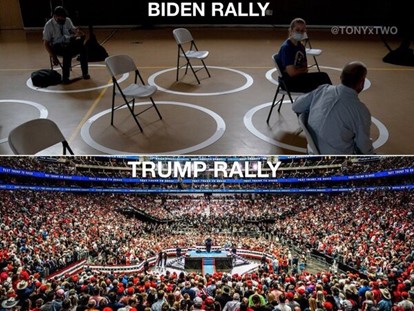 On Friday (11/27), President Trump tweeted something important.  He asserted that Biden must prove that his votes did not result from fraud.

Cynics scoffed, but as a practical matter, Trump is correct. Here is why.

Most people know about the different burdens of proof a plaintiff carries in court.  In descending order of intensity, they are “beyond a reasonable doubt,” “clear and convincing evidence,” and “preponderance of evidence.”  Practically, speaking, what do those mean?

Imagine that the plaintiff and the defendant are on opposite sides of a tennis court.  The plaintiff serves first.

[Note by JW:  Andrea has never played tennis – the serve must land in the opponent’s diagonal service box – so not sure the tennis metaphor works.  But cut her some slack here, as her point is important]

The defendant does not have a burden of proof, so he doesn’t have to get the evidence to any specific point on the plaintiff’s side of the net.  He just needs to get it over the net.  There are two ways to do this: he can show that the plaintiff’s evidence is factually incorrect (lies or mistakes), or he can introduce more compelling counter-evidence.

There’s an evidentiary wrinkle that applies here: “spoliation.”  Spoliation occurs when a party intentionally destroys material that might be evidence in a case (even if the case hasn’t yet been filed) or must be retained as a matter of law (as is true with election materials).

If you recall, Sidney Powell has stated that Dominion is destroying evidence.

If someone deliberately destroys these documents, there is a legal presumption that the documents’ contents support the opposing party’s contentions.

In Trump’s and Powell’s lawsuits, there are roughly three types of evidence:

The extra wrinkle in this case is incontestable evidence that paper trails and electronic trails were deliberately destroyed.

To date, some courts (as, for example, this Obama judge) have said Trump has no evidence.  In fact, Trump has massive evidence for all three categories — and certainly enough to get the election fraud claims over the net onto Biden’s side.

The real question is about Biden’s return volley.  He must prove either that the eyewitnesses, the mathematical experts, and the equipment experts lied or are mistaken, or he must provide a compelling counter-narrative to explain how he got more votes than Obama did in 2008:  See photo above.

At a minimum, Biden must have eyewitnesses about signature verification, timely mail-in ballots, the absence of duplicate votes, properly functioning machines, etc.  His problem is that the Democrats destroyed all or most of that evidence.  On those issues, therefore, the missing evidence presumptively supports Trump’s case.

Trump is saying his teams can easily get his evidence to Biden’s side of the net.  However, not only must Biden counter that evidence, but he’s horribly handicapped because of the presumption that all his missing evidence supports Trump’s case.