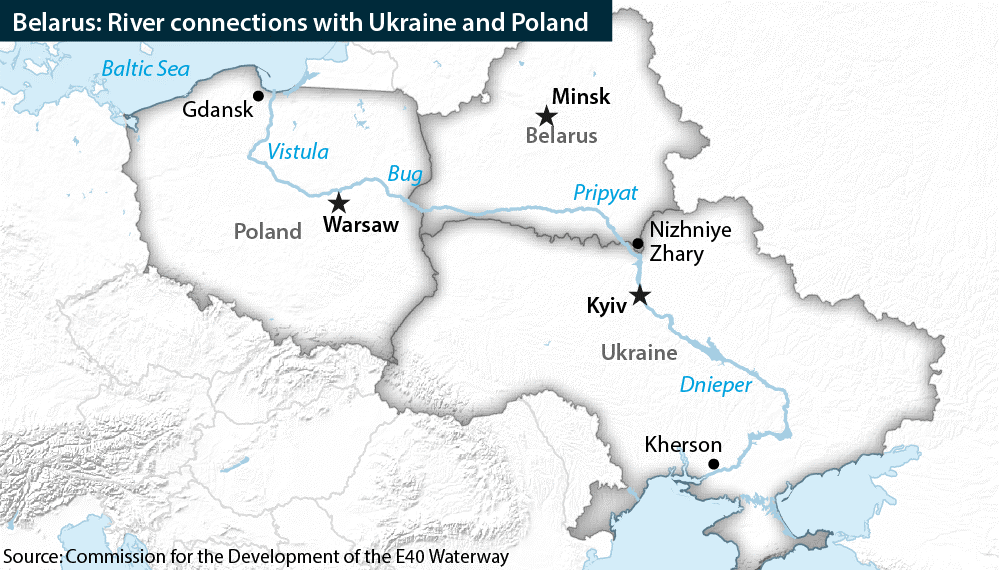 Plans for a new Baltic–Black Sea waterway, passing through Ukraine, Belarus and Poland, have the potential to revolutionize the geopolitics of Europe’s East as well as exacerbate East-West tensions.

The European Union has labeled the project “E40,” and the United States has signaled its support. And were the E40 waterway to be incorporated within the broader regional framework of the Three Seas Initiative (3SI), the transit project would not only help the economies of all three participating countries and their neighbors.

It would also promote trilateral cooperation on other issues, including security, and make each one of them more attractive partners for the West. This development would thus transform the frequently dismissed “countries in between” Russia and Western Europe—the geopolitical equivalent of “flyover states”—into a unified, collective player in its own right.

Not surprisingly, such prospects are gaining support in the US and part of the EU but generating ever more opposition in Moscow. Russia rightfully views E40 as a threat to its influence in the region and even, according to some analysts, as an existential threat to Russia itself.

For a century, Moscow has been leery of any efforts to promote East European unity, viewing them as an attempt to erect a cordon sanitaire against it and as a Polish plot against Russia.

Indeed, Poland took the lead in such projects in the 1920s and 1930s with its Promethean League and regional confederal arrangements (Marek Chodakiewicz, Intermarium: The Land Between the Black and Baltic Seas, 2012).

After World War II, however, the idea faded due to Soviet occupation and the division of Europe, which prompted all involved to think only in East-West terms rather than in the potential for North-South cooperation.

After the collapse of the Soviet Union, the notion again became realistic but gained relatively little traction at first because Central and Eastern Europeans saw their salvation in joining the West. In addition, many Westerners drew a new line between the former Eastern Bloc countries (including the three Baltic States and the former Yugoslavia) and the new republics that emerged from the disintegration of the Soviet Empire.

Few in the West gave much consideration to the notion of there existing a larger region straddling both sides of this new dividing line.

Yet, in the last decade in particular, the situation began to change after many of the Central and Eastern European countries that the West had accepted into its institutions concluded they were being treated as second-class members.  At the same time, some former Soviet republics, including Ukraine, began to fear that they were being barred from joining the Western club anytime soon.

As a result, the eastern European countries both inside the Euro-Atlantic community and left outside of it began to look for new ways to promote and defend themselves.  Not coincidentally, their demonstrated capacity for intra-regional cooperation made them more attractive to the West.

As a result, projects supporting the Intermarium idea—the notion of closer regional cooperation and integration among the countries between the Baltic and Black (and increasingly Adriatic) seas—have again started to garner growing attention and support both inside and outside the region.

The advocates of such projects, however, have been careful not to present them as a replacement for the European Union and the North Atlantic Treaty Organization (NATO) but as a supplement for those institutions, in order to ensure Western support (Qha.com.ua, July 5, 2016).

Due to its influence over Belarus President Alyaksandr Lukashenka, Moscow until quite recently had assumed that it could rely on Belarus to counter any proposed regional project excluding Russia.

As long as Belarus, at Moscow’s urging and insistence, refused to participate or dragged its heels, no serious East European regional cooperation effort from the Baltic to the Black Sea could take off because the countries to the north (Poland, Estonia, Latvia, Lithuania) would be cut off from the countries to the south (Ukraine and Moldova).

But now—particularly as relations between Moscow and Minsk have cooled—Russian officials are increasingly alarmed at Minsk’s new willingness to cooperate on the E40 waterway and a number of other regional projects (Minskdialogue.by, April 20).

A serious potential flashpoint is the Three Seas Initiative, a broader grouping of EU member states located in Central and Eastern Europe that are jointly cooperating on a slate of strategic, intra-regional transportation, energy and digital infrastructure projects.

Belarus and Ukraine are not full members of the 3SI (for now still limited to EU countries); and the E40 has not been adopted as an approved 3SI project, but Poland’s membership role within the Initiative leaves that a tantalizing possibility (Uacrisis.org, September 17, 2018; Kyiv Post, September 1, 2019).

Moscow sees both the 3SI and the E40 project as part of a multifaceted Western plot to exclude Russia from Central and Eastern Europe as well as to move the West up to Russia’s borders. Aleksandr Petrov, Moscow’s ambassador in Estonia, for example, has said his country is “ready for cooperation with all our European neighbors if their efforts are not directed at the isolation of Russia and the establishment of some kind of ‘cordon sanitaire’ ” (Interfax, December 17, 2019).

Moscow’s efforts to torpedo the E40 waterway and broader regional cooperation efforts will certainly not be limited to words alone. Beyond any doubt, it will continue to put pressure on Minsk not to cooperate, no doubt pointing out that Ukraine and Poland will benefit even if the project is only partially completed, while Belarus will not unless the entire route is opened.

Moreover, the Russian side will continue to play up the idea that supporting the waterway undermines Russia’s interests and will preclude future cooperation between the West and Moscow, leaving Belarus precariously in the middle.

Both of these factors make the current controversy over the construction of this north-south waterway far more fateful than a first glance might suggest. Moscow may feel it has no choice but to take radical steps in Belarus to prevent its loss of influence not only there, but elsewhere.

In turn, the West may then be confronted with the difficult task of countering such efforts in Belarus and other regional countries. A failure to stand up to the Russian narrative could preclude these countries’ best chance of escaping from Moscow’s grasp and strengthening their independence and democracy.