THE BETRAYAL OF MCCONNELL REPUBLICANS 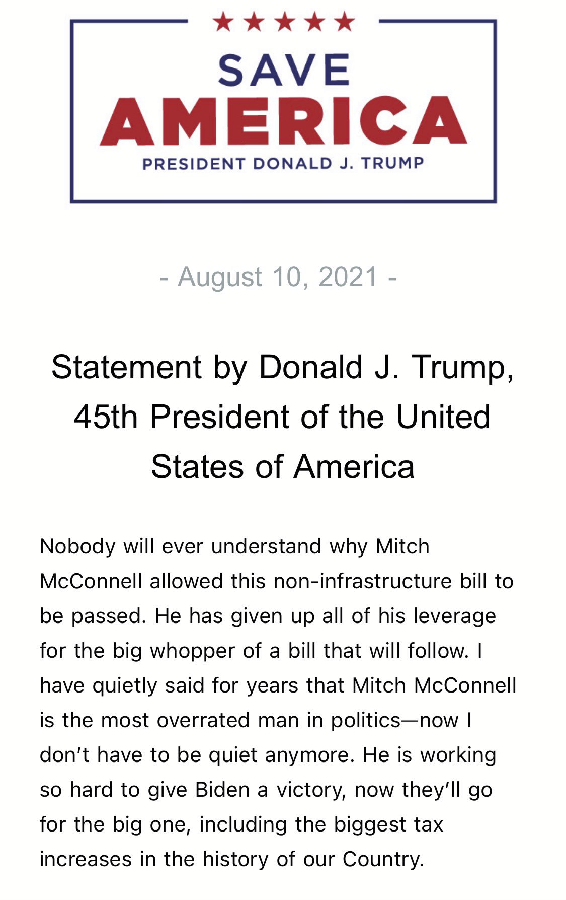 American patriots choose liberty but the 19 Republicans in the Senate chose tyranny.

Biden chooses tyranny and every single Democrat lockstep is for tyranny. How many people know what’s in that 2,700 page Infrastructure Hoax that just passed yesterday (8/10), with the 19 Republicans?

We have more media than ever before in this country. We have more Internet, social media, independent journalists and you really have to dig to find out.

Government by omnibus, massive bills, massive spending, massive deficits, massive expansion of the welfare is tyranny. This isn’t a representative republic anymore. You want to go in and see your congressman and senator? Good luck.

You want to call them about this bill? What are you going to say? Since it wasn’t released to you. We had 19 Republicans who supported it before the Democrat staffers even finished writing it. The congressional budget office that works for Congress said there’s at least a quarter of a trillion dollars in this that’s not paid for.

If you were in the private sector running a company and you conducted your accounting business this way you’d go to prison for life. This wouldn’t be a joke. No matter how righteous you sounded.

These Republican senators — I blame them. They are the Madoffs of the Republican Party. These are McConnell Republicans.

Twenty-three percent of this bill was for hard infrastructure. There’s all kinds of junk in this bill. They’re creating a new department that promotes female truck drivers. They have a Digital Equity Act, internet access for prisoners.

What else? Federal funding of local projects called Traffic Calming. Ever hear traffic calming and road diets? It is the intentional creation of traffic jams by Buttigieg so you’ll take public transportation. They’ve got all sorts of stuff in here.

The bill doesn’t quite impose a federal miles travel tax on cars – just hundreds of millions to encourage states and localities to tax every mile that you drive. It goes on and on and on.

You know what they did? They laid the foundation for what they say is a $3.5 trillion bill coming next. It’s $5.5 trillion.

And I’ll say it again and I’ve said it before: Joe Biden is a human pandemic. His Democrat party is as radical as it gets.

Now, let me tell you something else. These various American Marxist movements, whether it’s critical race theory, whether it is the degrowth movement dressed up as climate change, whether it’s the LatCrit movement, the open borders — do you know in the next bill that comes forward they want to give a pathway to citizenship to 13 million illegal aliens?

You know what else nobody’s talking about? Once they get citizenship, there’s something called chain migration. And then we’re going to have another round of amnesty with all the people Biden’s bringing in right now. This is a colossal disaster.

And let me say this: I can sit here and whine about it we all can. We need to galvanize. We need to rally. We need to understand what’s going on.

Republicans who sellout, who don’t get what’s swirling around for a few bridges and tunnels. they need to go. In every Republican primary write down those 19 Republicans, assuming some of them are going to run for reelection.

If we don’t at the grassroots, in our neighborhoods and communities stand up for own liberty and embrace some of these strategies and tactics in my book or that you may have, we’re gone. They win, with a 50-50 Senate, no mandate. With a four or five-vote majority in the House, no mandate. They win.

So we better wake the hell up. Or I’m done, we’re all done, America’s done.

Mark Levin is the host of The Mark Levin Show, as well as Life, Liberty & Levin on Fox News. His latest book is American Marxism.