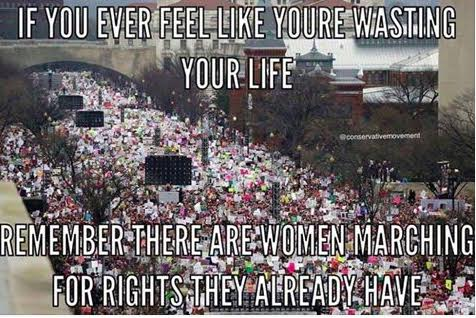 The anonymous attack on comedian Aziz Ansari, essentially for being a lousy date and inconsiderate sex partner, has led some to think that the spate of attacks on men for sexual harassment and assault might be slowing down.

Although the account by “Grace,” the pseudonymous accuser, has been defended by many, others who have supported the outing of sexual assaulters have drawn the line at lumping bad dates in with more serious sexual malfeasance.

Still others hope that the absurdity of Grace’s charges will force a rollback of the ever-escalating demonization of men guilty of nothing more than failing to fulfill a woman’s subjective expectations even when not made explicit.

Don’t count on it.  Modern feminism for years has institutionalized a fundamental incoherence.

Women are the equals of men and should have the same autonomy and agency, particularly over their sexual choices. At the same time, they need protection from men, who are empowered by a persistent “patriarchy” that encodes in women’s psyches a deference to that power.

This internal contradiction has given us the Snowflake Feminists.

Feminist Contradictions
This incoherence, moreover, is nothing new. It has been obvious since the mid-1990s, when Rene Denfeld in The New Victorians and Camille Paglia in “No Law in the Arena” analyzed how feminist ideology infantilizes women, making them out to be the helpless victims of “patriarchy.”

Yet those exposés of feminist contradictions did not slow down, in subsequent decades, the diminishment of women’s sexual agency.

In fact, the development on university campuses of restrictive policies regarding student social life and classroom behavior, and the unconstitutional campus investigations and punishments of men accused of sexual harassment and assault has spilled over into the larger culture.

The #MeToo movement, which confuses prosecutable sexual assault with unsubstantiated accusations of boorish behavior, is the culmination of this decades-old process.

The contradictions of feminism, however, reflect a much larger problem, one endemic to any identity politics predicated on grievance and victimhood.

Equity feminism, the demand for equal legal status, was a movement to sweep away the unjust laws and social mores that limited women’s lives. It assumed not that women were the same as men, but that they were capable of running their lives beyond the home, and did not need the tutelage of males.

Voting, attending university, joining the workforce were all expressions of the personal autonomy that underlay their innate right to liberty and the pursuit of happiness.

But the necessary corollary of freedom has always been personal responsibility. If women wanted to have a sexual autonomy equal to that of males, then they had to be responsible for the consequences of those choices.

However, the difference between male and female complicated things. It didn’t take long for the high cost of sexual liberation to be recognized as steeper for women than for men. The ruthless reproductive imperative that nature imposes on women means they cannot be as indiscriminate as men can in indulging their sexual drive. A woman’s body reminds her every month that for her sex isn’t just about sex.

Whether bestowed by Darwin or God, this fundamental natural limitation upon female sexuality—tethered to childbirth and a dependence on fathers for support of children—is bestowed by nature, and could not be removed by cultural fashion, birth-control, abortion, and all the other compensations for acting like men.

From Custom to Coercion
As these costs, such as unwed pregnancy or abortion, became more obvious in the decades after the sexual revolution, feminism continued to ignore nature and put the blame on politics.

As the slogan went, the “personal is political.” The “patriarchy,” encoded in unjust laws, mores, and customs, is responsible for these destructive consequences of sexual liberation. Hence changes in the law were required to control the sexual aggression of feral males.

Where once the social codes of chivalry and family honor, reinforced by custom and religion, reined in the male’s natural proclivity for indiscriminate sex, now the state and its coercive power that enforces sexual harassment and discrimination laws would protect women from predatory males.

Nothing illustrates this shift better than Barack Obama’s “Life of Julia” ad during the 2012 presidential election. The message of the ad was that from cradle to grave, the federal government and its redistribution programs could substitute for fathers, husbands, brothers, and boyfriends.

Women, for Obama,  can and should  become wards of the state, which now like a Roman paterfamilias looks after their welfare and punishes those males who dishonor them.

The larger political context for this move, of course, was the morphing of equity feminism into an activist movement predicated on grievance.

The superior social, economic, and political power of men­­—seldom supported by facts, but asserted by dint of dubious statistics documenting “disparate impacts”—was leveraged into more political and social power for women, provided that they accepted the leftist ideological narrative of their endless oppression at the hands of men, and the need for government intrusion to correct it.

Leveraging grievance to increase power means that the grievance, no matter how much improvement has occurred, must always exist, now in ever more subtle and subjective forms, as the juvenile mentality exhibited in Grace’s complaint illustrates. So today we are faced with the spectacle of the richest, freest, healthiest, best educated, most independent, longest-living women in world history whining about inept passes, juvenile jokes, and bungling Lotharios.

You Will Be Made to Care
Abetting this politicization of sexual relations is our culture’s therapeutic imperative.

Having been freed from the hard, tragic world most of humanity before us lived in—a world of chronic pain, disease, malnutrition, casual violence, and the cruel indifference of the natural world—we Westerners find our identity in our emotional states and feelings, and our grievances in petty slights and wounded self-esteem.

Our psychic “pain” must be acknowledged, its perpetrators punished. Language must be policed to spare victims from emotional wounds, and behavior must be monitored and adjusted to cater to the delicate sensitivities of the perpetually aggrieved.

Feminists today have embraced this childish demand for others to obsess over them and their feelings, and for punishment of those deemed insensitive to their pain.

This hypersensitivity and demand for cosseting on the part of today’s feminists are particularly ludicrous when one remembers how arrogantly modern feminism has caricatured the women who came before them. Before feminism liberated them, the story goes, women were beaten-down drudges, mired in false consciousness, pathetic slaves to the patriarchy, and timid sex toys or breeders.

In reality, the lethal lottery of childbirth, the subjection to brutal husbands, and the drudgery of housework before mechanized appliances created women infinitely tougher and more resilient than most men today.

Early upper-class feminists like the well-off English Bloomsbury group of the early 20th century sneered at Victorian women like Florence Nightingale, who ministered to the dead and dying during the Crimean War, in horrific conditions of gruesome wounds, rampant disease, and dying men crying for their mothers.

Yet the truly heroic Florence Nightingale is not a feminist icon like Virginia Woolf, a child of privilege and affluence who whined about not being able to go to Oxford like her brother.

Who’s Your Daddy?
Now we come to the biggest incoherence and hypocrisy of modern feminism.

Simone de Beauvoir, Germaine Greer, or Gloria Steinem didn’t liberate women. As Tocqueville remarked, “Evils which are patiently endured when they seem inevitable become intolerable when once the idea of escape from them is suggested.” Their activism was only possible because modern science and technology liberated women from the dangers of childbirth and the drudgery of domestic chores.

Dynamic capitalism created and expanded wealth that improved the lives of women, and gave them more opportunities and the confidence to demand changes in mores and laws that held them back. Science and capitalism created the “idea of escape” that made it possible for women to believe change was possible.

Equity feminism was about fulfilling the promise of liberal democracy. Modern feminism is an extension of the illiberal tenets of identity politics, which seeks the power to remake society according to their dubious beliefs about human nature, tradition, and the possibilities of human improvement.

The current crisis of sexual misconduct and persecution is the bitter fruit of this ideology, a consequence of rejecting nature and the wisdom of the past, not to mention the ingratitude feminism exhibits toward the science and capitalism that liberated them.

Even more ironic, the advent of Snowflake Feminism has reduced women to the very caricature they invented: weak, passive, and helpless without big government. That’s just exchanging one daddy for another.

Bruce S. Thornton is a Research Fellow at the Hoover Institution. His books include “Greek Ways: How the Greeks Created Western Civilization” and “Democracy’s Dangers & Discontents: The Tyranny of the Majority from the Greeks to Obama.”