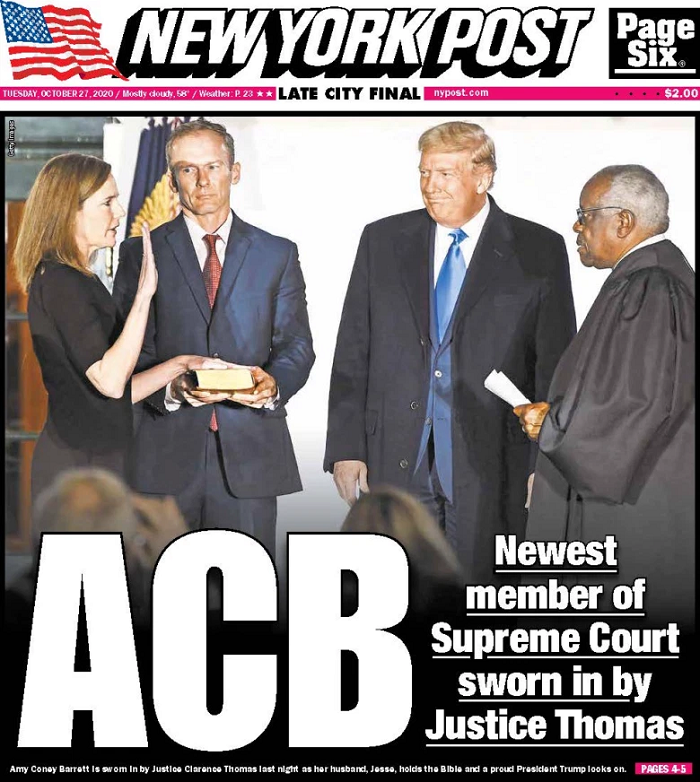 The Democrats, rather than accepting gracefully that the regularly-applied constitutional rules finally stopped favoring them, have responded with a complete meltdown. They’ve resorted to apocalyptic predictions, hysterical rants, and threats, lots and lots of threats.

The last time the Democrats behaved this disgracefully was in 1860, a temper tantrum that ended in a Civil War that left over 650,000 Americans dead.

Before enjoying the Democrats’ psychological collapse, it’s essential to understand the Barrett confirmation was constitutionally correct and had historical precedent. The Constitution states that the president shall nominate candidates for the Supreme Court, and the Senate shall confirm them.

Seating Supreme Court justices used to be a fairly mechanical process. However, as the Left has shifted its efforts from convincing voters to support their policies to placing leftist partisans on the Supreme Court who need no convincing, the process has become increasingly fraught.

While Republicans have routinely accorded a Democrat president’s nominees the courtesy of voting for them if they appeared competent, Democrats have imposed various litmus tests and, if those tests seemed futile, accused them of sexual assault.

Fraught or not, it was perfectly constitutional to nominate Justice Barrett. Trump would not have bothered if he was facing a Democrat-majority Senate, but that was not the case. He had a Republican majority, and Cocaine Mitch promised to make the confirmation happen (a promise he kept).

Sen. McConnell knew he had precedent to support him. After all, throughout American history, when the president and the Senate are from the same party, justices have been seated on the Supreme Court even if an election is drawing near. Indeed, John Adams put Chief Justice John Marshall on the Supreme Court after he had already lost the election to Jefferson.

Democrats were unimpressed by either constitutional norms or historical precedence. Elizabeth Warren, ostensibly a legal scholar who should know better, called it a “corrupt and illegitimate process to steal a Supreme Court seat.”

Richard Blumenthal, famed mostly for lying about serving in Vietnam, announced that Barrett’s presence on the Court would mean children will die from disease, women will die from court hanger abortions, and LGBTQ people will die all alone.

Chuck Schumer, in a surge of hysteria and stupidity, ranted that the confirmation was a “sordid chapter” in American history and “one of the darkest days in the 231-year history of the United States Senate.” And then, in a beautiful self-own from a man who supports unlimited abortion, he said, “Generations yet unborn will suffer the consequences of this nomination.”

Perhaps, but with a Barrett court, there’s a possibility that, eventually, they will be born.

Following the hyperbole came the threats to pack the Court. AOC started it, along with a vulgar reference to gonads:

“Republicans do this because they don’t believe Dems have the stones to play hardball like they do. And for a long time they’ve been correct. But do not let them bully the public into thinking their bulldozing is normal but a response isn’t. There is a legal process for expansion.

Ilhan Omar chimed in, with a completely pointless reference to a “popular vote” in a system that works under an Electoral College:

“Remember that Republicans have lost 6 of the last 7 popular votes, but have appointed 6 of the last 9 justices.
By expanding the court we fix this broken system and have the court better represent the values of the American people.

Nancy Pelosi not only threatened to expand the Supreme Court, but the lower level courts as well:

“PELOSI: ‘Should we expand the court, let’s take a look and see.’ pic.twitter.com/hVS5OaT9nW

After that, the floodgates opened, with court-packing tweets from blue checks who boast hundreds of thousands of followers:

“I don’t think the Republican Party understands what a radicalizing moment this is for Democrats.
Defend the freedom to marry, defend choice, defend the ACA, defend the constitution.
Expand the court.

“I believe Trump is going to lose in a landslide and leave in humiliation. The Senate with him. He will count the courts as his one success. We need to start organizing to make sure Biden acts to expand the Court immediately. If he wants a panel, the clock starts on Nov. 4.

“Whack the Court.
Pack it
Stack it
Frack it
Smack it.

Crack it
Open
Shack it
Up
Rack it!
Yes, it’s a RACKET.

Black it
Brown it
Green it
Blue it
Expand it!
Term limit it!
Fix it!
Now.

“We are going to expand the Court. https://t.co/FPhcb42khG

This is the Left: As long as they’re winning under the rules, they’ll play by the rules. But once they lose, they’ll change the rules, even if they have to burn it all down to make it happen.

If you would prefer not to see Democrats burn everything down in their pursuit of total power, make sure you vote.

And while I don’t usually advocate early voting (because, as Biden voters have discovered, sometimes you learn interesting things before election day), you won’t learn anything new about Trump, who’s been turned inside out in the past four years.

Lines will be heinous on election day, so get your vote in sooner, rather than later (or not at all).  Or just enjoy being in line with your fellow Trump supporters!